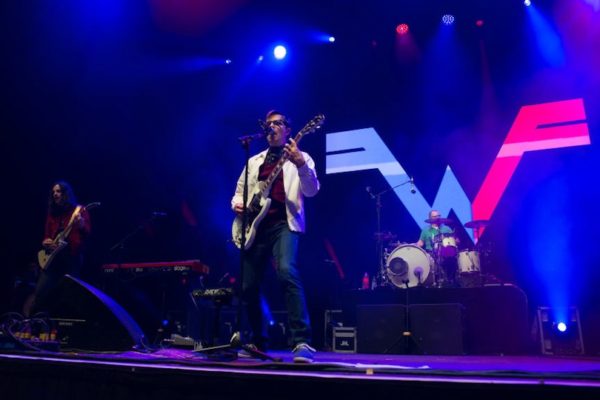 There’s a case to be made that Weezer is the greatest band to come out of the mid-90s “alternative rock” wave. Semantics being as important as some antics, it’s critical to note at this juncture that greatest is not necessarily synonymous with best. Having remained popular for over two decades, their staying power is as undeniable as the magnificence of their first two albums. Since Pinkerton in 1996, though, their albums have been highly inconsistent affairs.
[amazon template=left aligned image&asin=B01C26VX6E] That’s not to say there haven’t been great songs along the way. From “Island in the Sun” to “Da Vinci,” every album since Pinkerton has offered listeners at least one example of the best of Rivers Cuomo‘s songwriting. However, as often as not, those nuggets of pure pop pleasure were cast adrift in very choppy waters. While 2014’s Everything Will Be Alright in the End was presented as a return to form – and was certainly their best since 2008’s Red Album – the band’s better self was still fighting it out with their worst impulses.

Which brings us to their latest self-titled record – The White Album. Preceded by the single “Thank God for Girls,” a deliberate recall to their debut album, the latest iteration of Weezer may finally be the album fans have been hoping for all these years. In some respects, it sounds very much like the love child of The Blue Album and Pinkerton, which is no bad thing, but in many respects the thing that seems to have helped them find themselves again is channeling the influence of another band.

Despite the implicit Beatles reference in the album’s designation, it’s The Beach Boys whose spirit seems to fill this record. It’s a subtle vibe – there are no obvious Pet Sounds homages or 21st century rewrites of “Don’t Worry Baby.” In fact, one of the few overt references to the group is the title of the album’s final song, “Endless Bummer.”

And what a way to end the record that last song is. Unfolding with gentle acoustic guitar and building slowly, this story of love that both came and left too soon is as perfect as anything they’ve ever done. That is to say, it’s up there with pop music’s greatest – and best.

0 comments on “The Other White Album”