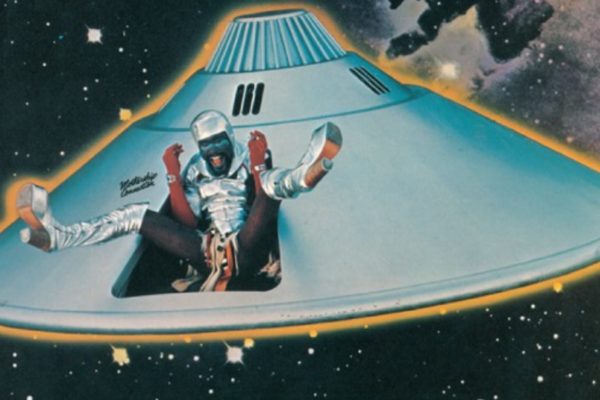 In the post-Sgt. Pepper era of popular music, the conversation regarding the most pivotal concept albums usually directs itself to the arena of classic rock bands, such as The Who’s Tommy and Pink Floyd’s Dark Side of the Moon. Overlooked in that same conversation are R&B and Soul masterpieces such as Marvin Gaye’s What’s Going On? and Sly & the Family Stone’s Stand. While musicians such as Stevie Wonder and Curtis Mayfield would also further the conceptual aspect on vinyl, no artist took the thematic approach as far as George Clinton and Parliament-Funkadelic in the second half of the 1970s.

Developing a concept alongside an ever-evolving, intergalactic storyline, the P-Funk crew fueled the imagination much in the same way that the revolutionary instrumentation of Bootsy Collins, Bernie Worrell, Garry Shider, Jerome Brailey, and the recently departed Junie Morrison fed our quest for rhythmic liberation. This analysis of the Parliament albums released between 1975 and 1980 attempts to shine the Flash Light on the grand, far-reaching concepts that made these albums the untouchable landmarks that they are today.

Chocolate City (1975)
Parliament’s conceptual approach begins with their second release for Casablanca Records, the label that the band signed with a year earlier. Portraying African-Americans in situations that white folks would least expect (a through-line in all subsequent Parliament albums), Chocolate City envisions black folks in all facets of the U.S. government. From the White House on down. While only the title track embraces the overall concept, the idea informs for the remaining eight tracks, energetically and emotionally. Imagine if you will, Muhammad Ali welcoming all visitors (who possess a James Brown pass), Reverend Ike as Secretary of the Treasury, Richard Pryor as Minister of Education, and Aretha Franklin as the First Lady. It’s a far-reaching vision powered by the ridiculous grooves of Collins, Worrell, and the rest of the Funk Mob. Did someone slip this album to Barack Obama in his eighth-grade social studies class? You decide.

Mothership Connection (1975)
Originally titled Landing In The Ghetto, Mothership Connection descended upon the planet in December of 1975 and launched Parliament’s cosmic mythology. George Clinton now transports Black folks to outer space while embarking on the mission – relayed through the slick-talking interplanetary representative Star Child the long-haired sucker – to drop THE BOMB on a Funkless existence. But unlike previous P-Funk albums, this particular project would be bolstered by a live stage extravaganza that represented uncharted territory for an African-American band. The grand visual spectacle would include the landing of one the greatest stage props in rock history: The Mothership. Designed by renowned lighting/stage designer Jules Fisher (who performed similar magic for Kiss, David Bowie, and The Rolling Stones), this theatrical innovation combined with the band’s first million-selling single “Give Up The Funk (Tear The Roof Off The Sucker)” propelled this album to platinum status.

The Clones of Dr. Funkenstein (1976)
Released during the fall of 1976 (while Mothership Connection was still on the album charts), the follow-up introduces the outer-wordly Dr. Funkenstein to the Parliament mythos. A cool ghoul with a bump transplant, Star Child’s father is a disco fiend with a monster sound, poised to Funkatize this galaxy and beyond, aided and abetted by his Children of Production. This project also sports one of the most bizarre album covers ever released by a platinum-selling Black musical act, showcasing all of the doctor’s clones within the Mothership itself, thoroughly proving that everything is on the one when your Funkin’ for fun! Ya dig!?

Funkentelechy Vs. The Placebo Syndrome (1977)
Another grand stocking-stuffer for Funkateers worldwide, Funkentelechy encapsulates the narrative in just six songs that take the entire Funk genre in a completely fresh direction. Enter the arch-nemesis Sir Nose D’Voidoffunk, an un-funky wallflower who will never dance, the physical embodiment of the con job perpetrated by the Placebo Syndrome, which Sir Nose spreads throughout the galaxy. It is because of this intergalactic threat that Dr. Funkenstein arms Star Child with a state-of-the-art weapon: THE BOP GUN!!! Shooting Sir Nose with the Bop Gun results in our archenemy giving up the Funk in a Flash of Light, in turn spawning the smash hit “Flash Light”. This chapter is thoroughly explained in an 8-page comic illustrated by in-house P-Funk illustrator Overton Loyd who also drew the poster of Sir Nose that is included with the album.

Motor Booty Affair (1978)
Emerging from the aquatic depths on Nov. 20, 1978, MBA takes Parliament in a new direction: the undersea world of Atlantis, a world now populated by….you guessed it…Black folks, and poised to be raised to the surface. Sir Nose now states that he can’t swim (and won’t sweat for that matter), since he remains D’Voidoffunk. He has now teamed up with the Bumpnoxious Rumpofsteelskin to once again, sydromize the planet. In retaliation, Dr. Funkenstein commands Star Child to gather the baddest master-Funkers from throughout the galaxy, dancing down Bimini Road to the Emerald City doing the Aqua Boogie. Easily the most fully realized concept album in the Parliament discography, this album sports one of the most elaborate packaging efforts of the era, featuring a gatefold that contains a pop up display of Atlantis along with stand-up cut-outs of MBA characters such as Mr. Wiggles, Octave Pussy, Rita Mermaid, and Howard Codsell. Also released in picture disc format.

Gloryhallastoopid (1979)
The last Parliament album of the 1970s sees Mr. Wiggles from the Motor Booty Affair using the rhythms of Pyschoalphadiscobetabioaquadoloop to rearrange the molecular structure of Rumpofsteelskin’s “Don’t Try It!” megatons. Sounds a bit convoluted? Ridiculous? Preposterous? Yes, it does. Even by P-Funk standards. That’s because Dr. Funkenstein is now taking credit for the original Big Bang. (You know…The one that started the universe!) This latest installment also sees Sir Nose organizing a nefarious collection of intergalactic villains known as the Unfunkables. Their objective? To turn Star Child into an ass (literally) in front of all the Party People currently throwing down at the Jam Station by way of the Black Hole. A nonsensical Funk fantasy that has everything: assendectomies, flea powder, bootleg T-shirts, P.C.P., alien burgers, and even a guest appearance by Robin Williams. In the end, however, all that fuss was us!

Trombipulation (1980)
The Parliament saga surprisingly comes to a quiet end with the arrival of a new decade as Sir Nose fulfills his ultimate dream – taking over the Funk Mob. New revelations are revealed in the New Doo Review, combining a clever mix of Egyptology, Congolese-inspired hairstyles, cro-nasal sapiens, and physical manipulation of elephant trunks. Have we encountered the missing link or the missing stink? After you finish dancing to this climatic party platter, you’ll have to figure that out by yourself.

3 comments on “To Hell With Concept Albums! Parliament Did a Concept Series”