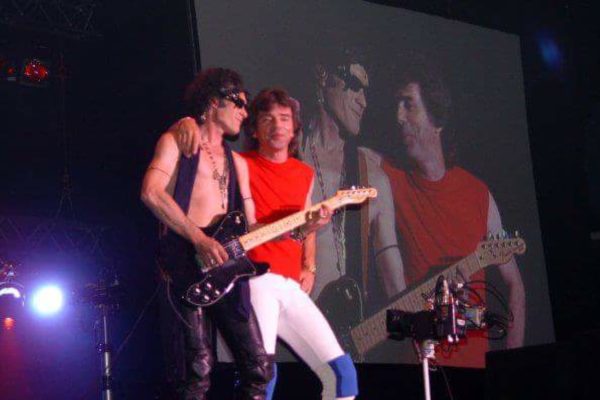 Some musicians can be incredibly reticent about admitting which of their songs they believe is their very best. Tribute band musicians? Not so much. They wear their passions on their sleeves. And so we asked some of the talented singers, guitarists, and drummers affiliated with a few of the biggest Rolling Stones tribute bands out there to tell us their top picks (as well as the greatest challenges) when it comes to the discography. For the record, “Midnight Rambler” was a tough song to cover for a couple of these guys!

Dan Gorgone, Drummer for Sticky Fingers and Stony Rollers
“Time Waits for No One.” There is a timepiece click track on it. It has, what some people consider, Mick Taylor’s best guitar solo and also his last effort before leaving the Stones.

David Plankin, Singer for Stony Rollers
“Sympathy for the Devil.” I was eleven-years-old and that rhythm just reached inside and shook me… Who were these guys? Woo-hoo!! I was hooked.

Glen Carroll, Singer for Sticky Fingers
“Gimme Shelter”‘s multi-level, building intro always solicits my undivided attention from its very beginning with its unique 5-string open tuning, that seems to sway beneath the song as an extremely powerful force about to be released much the way a NASA rocket does just before lift-off. From there the song picks up gale hurricane energy force that leads to a sizzling hot guitar solo only to be followed by and perhaps even rivaled by the impeccable haunting female backing vocals of Merry Clayton. The song encapsulates with music what some people feel inside about social unrest, environmental disasters, and evil threats that are just as apropos today as they were when this song was first released.

JJ Appleton, Lead Guitarist for Stony Rollers
“Rocks Off” is my favorite Rolling Stones song. To me it is the ultimate “Stones everything.” Vocal style, guitar sounds, lyrics, slightly sloppy but incredibly grooving, pure rock and roll in a continuation of Chuck Berry’s style, and American ’50s and ’60s R&B.

Joe Reirdon, Drummer for Sticky Fingers
For me , it’s always been “Sympathy for the Devil.” As a drummer, I’m drawn into Charlie’s drumming on that one. It was always a favorite to play in the bands I’ve been in over the years.

Kevin Gleeson, Lead Guitarist for Beggars Banquet, Sticky Fingers and Stony Rollers
“Love In Vain.” 47 years ago when I took up the guitar, it was the only song I wanted to learn how to play. I still love it passionately.

Rudy Blay, Bassist for Stony Rollers
My favorite song is “Miss You.” As a bassist, it is a cool bass groove with great guitar timing. A great crowd pleaser.

What is the toughest Rolling Stones song to perform?

Dan Gorgone, Drummer for Sticky Fingers and Stony Rollers
None… Charlie is the best, simplest, user-friendly drummer ever. As long as you play and create a great pocket, and you can keep near-perfect time, and do not overplay, it’s the easiest way to the complete rock and roll backbeat.

David Plankin, Singer for Stony Rollers
“Fool to Cry” or “Emotional Rescue.” Jagger had a very underrated falsetto. “Let It Loose” on Exile on Main Street has a lot of nuances… Think it may be my fave Jagger vocal.

Glen Carroll, Singer for Sticky Fingers
“Can’t You Hear Me Knocking.” Rolling Stone magazine called the saxophone solo in “Can’t You Hear Me Knocking,” “The sexiest sax solo in rock-n-roll history” and they are correct. Having recorded a dozen songs as well as performing live with the late-great saxophonist Bobby Keys, I am blessed to have been able to sing that song live with the original saxophone player on stage with me that the Rolling Stones themselves used. Every time I perform that song I can’t help but think of the conversations and the amazing times that I shared with BK and how we can sadly never do it again.

JJ Appleton, Lead Guitarist for Stony Rollers
The “Midnight Rambler” live version from Get Yer Ya-Ya’s Out. So many different sections, I always lose count of the bars. And the feels of each section are hard to duplicate!!

Rudy Blay, Bassist for Stony Rollers
The Stones songs do not have difficult bass lines, However, the one song that I have a problem with is “Before They Make Me Run.” I have a difficult time with the structure and timing of that song.

Photo Caption: Kevin Gleeson as Keith Richard and Glen Carroll as Mick Jagger at the Ahoy Arena in Rotterdam, NE (2005)