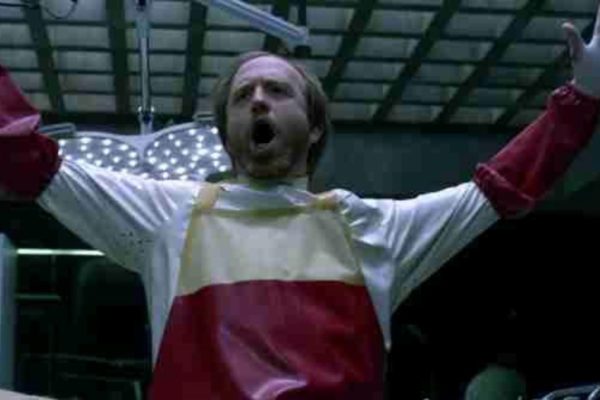 Computers are taking over the world. They’re taking over our jobs. They’re taking over our lives. Hell, Amazon and Pandora are already making music recommendations for us. But what about the reverse? What should a robot or android or cyborg listen to? With that in mind, we’ve reached out to Ptolemy Slocum, who as an actor on Westworld, must be considered somewhat of an expert in the tastes of AIs. Kindly, Slocum takes it a step further and recommends what we should bring along should we end up alone on a desert island after we escape the robot overthrow.

[amazon template=right aligned image&asin=B01MQMOY2U]Q: Name three albums that you’d encourage the androids of Westworld to listen to as a way to become more human?

A: Okay, I’m going to assume high functioning free-will AI, (Westworld style) that could be friendly or hostile, and are going to be visiting human cities/culture for the first time…

1. Prokofiev’s Romeo and Juliet
You gotta start with a symphony, right? I feel like the notes would arrange in some kind of mathematical visual structure in their minds. (I’m speculating on how they would hear things…) So, why Prokofiev? Well, this piece is constant visual storytelling, it’s just incredibly dramatic and passionate – almost bi-polar… It captures that teenager-hormone-explosion experience, and listening to it you would think “damn, humans feel too much, and are literally all over the place” …and that would be a good lesson.

2. The Beach Boys’ Pet Sounds
You could put a lot of albums here (Simon & Garfunkel, The Beatles, Fleetwood Mac). I think you’d want something that transitions into human culture, in words and harmony. Particularly I’m looking for the poetry of how humans try to express their existence. Pet Sounds would be on the dissonant end of the spectrum, but I think the subtle mathematical incongruities in some of the notes would be puzzling, and hopefully show humans as more beauty then maths.

3. Kendrick Lamar’s To Pimp a Butterfly
I think this is a solid “catch-all” album and “intro to current human experience,” mainly because it is so many things… Musically, there are elements of: hip-hop, rap, jazz, funk, blues, rock, metal, pop, soul, etc. thrown all over the place. Assuming androids have these songs memorized (downloaded?), they could hold up snippets of this album to recognize almost any style of popular music… Additionally, the lyrical complexity would be totally mind-blowing without social context, and would be a puzzle to work on for a long while… But overall, two things: 1. The dark and often violent complexity of human society…. 2. The “hero’s journey” concept-album side of it which is a fundamentally human theme.

Q: Name three Desert Island album picks you’d make for yourself and why.

A: I’m gonna assume I’m alone on this island? And there are provisions to survive on, etc… and some kind of music player… if there are no provisions I’m taking “How to Survive on a Deserted Island” audiobook as my second selection…

[amazon template=right aligned image&asin=B000V7J82S]1. Bob Marley’s Legend
First of all, you want to go looking for music that can play all day and keep you goin’… I assume hut-building? and whatever else you do all day on an island… I imagine constant “weaving”… Legend is awesome for that – but can also be sit-down and really listen to it music… The Beatles or whatever works here too – but Bob Marley music comes from island living, and I feel like once you’re trapped on that forced paradise, you’ll wish you had it…

2. Radiohead’s OK Computer
For a second option, you want something entirely un-island like – that can get your mind off that desolate sand-hell – and get you back to complaining about sociopolitical and existential issues again… Beyond being one of the greatest albums of all time, this album rocks hard at points, but it’s also very visual, and for me has a lot of history I could reminisce about. (Bonus points for appearing in the Westworld finale as well…)

3. Neutral Milk Hotel’s In the Aeroplane Over the Sea
I mean… what can’t you find in this album?! It is literally all things… poetry, humanity, passion, narrative, emotions… joy, sorrow, beauty, ugliness, love, rage, compassion… It’s brutally raw and yet at times deeply elegant – and embraces both how shattered life is and also how simply, and beautifully whole we can be together…  I think at first this album would make you deeply lonely on a desert island… but after awhile it would be every piece of humanity you would need for companionship… if I had one album this would be it…

Q: If you were going to curate a double-feature of sci-fi movies featuring androids/robots/AI what would they be?

A: I would probably make it a double/double theme of Scarlett Johansson / Android films: Under the Skin followed by Her. I absolutely loved Under the Skin, dark and tonal… almost more meditative then narrative, but an incredible experience, especially in a theater… and then Her would be a great pallet cleanser… a rare film that works from beginning to end… Also, both have great music and are both beautifully produced… That would be an awesome evening of AI films!

A: It’s gotta be The Magnificent Seven right?? Such a kick-ass film. He’s definitely featured more in other films, and I feel like he delivers more in both The King and I and Westworld… but The Magnificent Seven is just so good…  “I’ve been offered a lot for my work, but never everything.”

0 comments on “When Androids Dream of Electric Music on “Westworld””