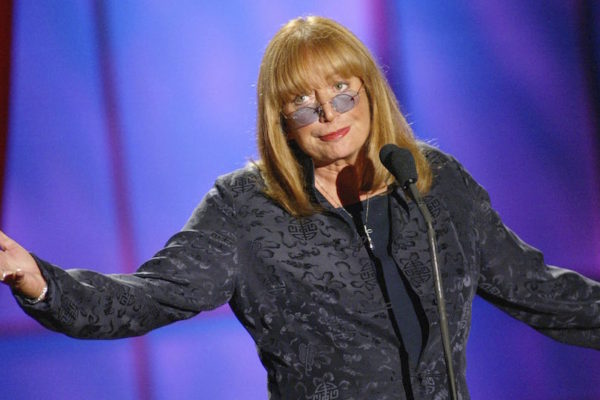 To hear Penny Marshall tell it, she fell into directing “by accident.” She told IndieWire, “They saw I was a responsible person. I show up when I say I will show up.” The truth is, Marshall had developed an interest in directing while she was starring on the hit sitcom Laverne & Shirley, created by her late big brother, Garry. He encouraged her to step behind the camera for four episodes of the show. But Marshall only started directing feature films when 20th Century Fox called her, desperate for a replacement director for their comedy, Jumpin’ Jack Flash, starring Marshall’s friend Whoopi Goldberg. “I need an enormous amount of encouragement to do anything, even to go out to dinner,” she joked to the Los Angeles Times, “but I go where I’m wanted.”

And Penny Marshall has certainly gone to some interesting places in her limited filmography. Two of her films have explored forced adulthood (Big and Riding in Cars With Boys), one has looked at the boundaries of the human mind and body (Awakenings), two have been fish-out-of-water comedies so to speak (Jumpin’ Jack Flash and Renaissance Man), one is a sweet and tuneful remake of a classic (The Preacher’s Wife), and one has celebrated a forgotten chapter of female sports history (A League of Their Own). Yet all of her films exhibit a warmth and heart sorely missing from most films made today. It would be easy to label her directorial output as overly-sentimental, given recent cinematic trends towards cynicism and emotional minimalism, but to focus solely on the feel-good tone of Marshall’s work not only trivializes it, but misses the point entirely. Much like the actor/director herself, Marshall’s films have an edge hidden behind the warm facade.

Consider Big, Marshall’s hit second feature. On the surface, it’s a pleasant coming-of-age fantasy with a terrific cast and one memorable piano duet; but it’s also a story of a 13-year-old thrust into some pretty adult scenarios. Josh Baskin (Tom Hanks) may have the body of a 30-year-old, but he’s still a kid at heart, which makes for some awkwardness when he starts seeing his toy company co-worker Susan (Elizabeth Perkins). In the wrong hands, these more adult situations might read as creepy, but Penny Marshall deftly finds the humor, coaxing charming, bittersweet performances out of Hanks and Perkins. She turned a script everyone in Hollywood had passed on into a film that earned multiple Academy Award nominations and serious box office returns; so good, she became the first female director to gross over $100 million, paving the way for Wonder Woman’s Patty Jenkins.

Marshall saved the day again when she signed on to direct perhaps her most beloved feature, A League of Their Own, in 1992. Her daughter, Tracy Reiner, was cast in the film, and when the original male director left, she convinced Marshall to step in so it wouldn’t be sold. A mega-sports fan, Marshall took to the subject matter easily and passionately, insisting all of the women in the cast (even Madonna) bond and train vigorously over several months to really play baseball on camera. Striving for authenticity, she set up multiple cameras around the field and had the cast play several real games each day so she could capture enough footage for the film. Though A League of Their Own is a heartwarming comedy, thanks to Penny Marshall’s diligence, it’s also a great sports movie in its own right and a feminist one at that. Looking back on the film’s success years later, it’s impossible to imagine anyone but Marshall helming it, let alone a male director. In World War II, women saved major league baseball, and decades later, a woman saved a film about them. Seems pretty apropos.

But Marshall knew immediately she wanted to direct Awakenings, the 1990 drama about catatonic patients who are revived by a miracle treatment. As with all of her films, she found the humor and hope in the otherwise heartbreaking story, but she had plenty of doubts about whether or not she could pull off the dramatic material. And so did her star, Robin Williams, who worried co-star Robert De Niro would “blow him off the screen.” Marshall’s biggest challenge was reigning in Williams’ explosive comedic talents, so the story’s natural humor could shine through. Having known Williams since their earlier days working on sitcoms, Marshall and the actor developed a shorthand on set, trusting each other to push the other out of their comfort zones. The result is Williams’ most mature performance (up until that point in his career) and an assured dramatic film from Marshall that earned three Academy Award nominations.

Though Penny Marshall never quite reached the same level of acclaim or box office with her other films, she’s brought the same diligence, attention to detail, and sense of humor to every project she’s been part of. The Preacher’s Wife not only showcases Whitney Houston’s considerable vocal talents but feels hopeful without being too saccharine. Renaissance Man asks audiences to reach their highest potential. Riding in Cars With Boys doesn’t shy away from the uglier parts of motherhood, while celebrating the resilience of women. Throughout all of her projects, Penny Marshall has shown a talent for capturing real human behavior and experiences and making it relatable to audiences, and she’s paved a way for women onscreen and behind the camera. She might not have as lengthy a resume’ as her brother or male contemporaries, but she’s still truly in a league of her own.