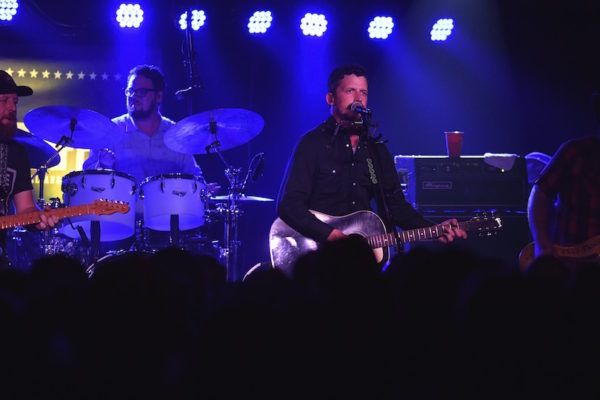 The run-up to Thanksgiving is a funny time for folks who scrutinize new album releases. It’s too early to start truly tallying up any end-of-the-year lists yet—you never know what’s liable to slip in just under the wire and cause you to recalibrate your entire agenda—but it’s late enough in 2017 that you can at least zero in on some of the most intriguing records to appear in the autumn. So here’s a pretty disparate batch of fall albums that run the gamut from ambient electronics to scrappy soul and eccentric outlaw country, all of which provide reason for gratitude on Thanksgiving Day.

1. Chris Gantry’s At the House of Cash (Drag City)

Gantry was the original Nashville outlaw, his Nashville songwriting career predating that of his running buddy Kris Kristofferson. In the late ’60s/early ’70s, he was hailed as the Bob Dylan of Nashville, but by 1973 a Mexican peyote journey put him in a headspace that was even too left-field for his friend Johnny Cash, whose home he’d been crashing in. Nevertheless, Cash let him cut his acid-inspired songs at his home studio. The brilliantly eccentric results sat on a shelf until now.

Back in 2000, U.K. outfit Cousteau gave the world a new idea about what Britpop could mean by combining Liam McKahey’s rich baritone with keyboardist Davey Ray Moor’s classy songcraft for a sort of Bowie-meets-Bacharach feel. They ran regrettably aground a few years later, but now they’re back with a new album, a slightly altered moniker, a deeper, darker sound, and an undiminished knack for blending adult pop urges and moodier motivations.

The Groovies have been around since the late ’60s and prefigured everything from punk to power pop. This is their first album in 24 years, and the first in much longer to feature both key members Cyril Jordan and Chris Wilson together. If the blend of garage-rock rawness and pop savvy occasionally echoes the likes of Big Star, keep in mind that these guys actually predated that bunch!

4. Johnny Nicholas’ Too Many Bad Habits (The People’s Label)

Around 1977, bad-ass Texas-based blues singer-guitarist Johnny Nicholas was hanging with legendary bluesmen like Johnny Shines and Big Walter Horton, who helped him make this smoldering stack of tunes. Unfortunately, the album went out of print by the following year, so precious few folks got to hear it at the time. That wrong has happily been rectified for the record’s 40th birthday, with a blasting bonus disc of additional material added to the bargain.

This double-DVD/triple-CD box documents a pair of shows Richard Thompson did in 1983 and ’84 for the legendary German music TV series Rockpalast. The first of them finds the folk-rock guitar god backed primarily by former bandmates from Fairport Convention, but both concerts find Thompson full of fire. The sets lean heavily on his ’83 album Hand of Kindness, his first after splitting from wife and singing partner Linda. And whether he’s tearing into a rocker like “Tear Stained Letter” or summoning some serious six-string sturm und drang on the doomy, Linda-era “Shoot Out the Lights,” Thompson is a marvel to behold.

Sexagenarian soul/blues man Robert Finley‘s album is the flagship release for Easy Eye Sound, the new label of The Black Keys‘ Dan Auerbach. Finley brings a gritty, old-school R&B vibe and loads of gravitas to the proceedings, and the production strikes just the right balance between classic and contemporary vibes, neither feeling overtly retro nor whitewashed for maximum crossover potential.

7. Seven Fields of Aphelion’s Keep The Ocean Inside (Rad Cult)

With Pittsburgh’s Black Moth Super Rainbow, Maureen Boyle (a.k.a. Maux) blends indie rock, psychedelic influences, electronics, and more. But on her own, under the banner of Seven Fields of Aphelion, she crafts ambient electro-acoustic textures that are as evocative and mysterious as the project’s moniker. She took her time following up 2010 SFoA debut Periphery, but the wait was well worth it. The delicacy and sophistication of the layers she stitches together here are dreamy but never directionless, and airy but undeniably insinuating.

8. Turnpike Troubadours’ A Long Way From Your Heart (Thirty Tigers)

Barring Steve Earle and Lucinda Williams unexpectedly sneaking out an end-of-year duets album backed by The Jayhawks, this Oklahoma gang‘s latest will wind up being the best alt-country album of 2017. Even if the band’s empathetic interplay weren’t so exemplary, it would be impossible to ignore front man Evan Felker’s gift for capturing a moment with poetic impact while somehow making it seem as easy as falling out of bed.

You can’t help wondering how much the marital relationship of piano legend Andras Schiff and virtuosic violinist Yuuko Shiokawa feeds their musical interplay on this collection of duo pieces by the composers in the album title. Especially when the feel of the interpretations shifts from urgent and visceral to reflective and understated with the seamlessness of a conversation between two people who’ve been sharing ideas for decades.

0 comments on “9 Fall Albums to Be Thankful For”