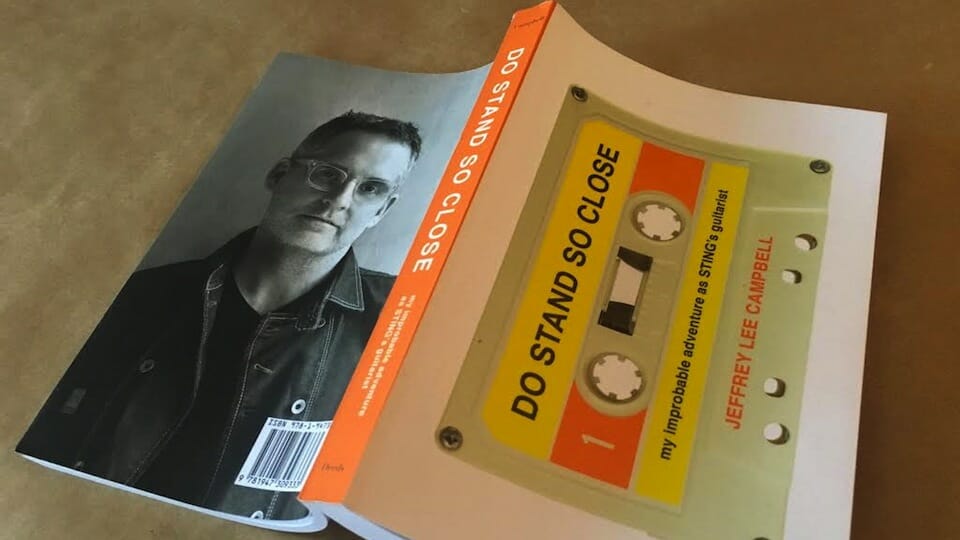 The following is an excerpt from Jeffrey Lee Campbell’s Do Stand So Close: My Improbable Adventure as Sting’s Guitarist, the recently released memoir recounting the author-musician’s glamorous — and grueling — 25-country, six-continent trial-by-fire experience on Sting’s “Nothing Like The Sun” World Tour. Click here to order your own copy of Campbell’s book.

October 17, 1987, marked the 13th season premiere of Saturday Night Live — and my network television debut. I was psyched that my friends and family around the country would get a chance to see me perform with my new pal Sting … “Live from New York!”

I was picked up at my apartment by an NBC limo and delivered to Rockefeller Center for our 5pm soundcheck. My heart skipped a beat as I exited the elevator and strutted down the same hallway I’d seen featured on numerous SNL production numbers over the years. I pushed through those familiar double doors and stepped onto the hallowed set. I checked in with Team Sting, tossed my guitar up on stage, and dug into the first of many “hurry up and wait” portions of the day.

Left to my own devices, I set out on a self-guided tour of the SNL campus. I wandered up and down the halls, marveling at the vast collection of framed memorabilia. Adrift in my reverie, I rounded a corner and literally bumped into Sting. He took pity on the little lost lamb and invited me to tag along. Next thing I knew, I was standing in Steve Martin’s dressing room. Sting doled out the introductions. “Steve, Jeff; Jeff, Steve.” I squeaked out a nervous hello and flopped on the couch in the corner. I grabbed a random magazine and pretended to read while the two heavyweights ran lines for their James Bond skit. (For all I know, I was holding the magazine upside down.) Watching Steve “007” Martin and “Gold-Sting” hone their comedic timing was incredible, but MY portrayal of “nonchalant companion” was far and away the most Emmy-worthy performance in the room.

Despite the glut of downtime, musical guests were not permitted to leave the building. NYC is a wonderland of temptation and distractions, and Lorne Michaels was not going to risk having one of his performers turn up MIA come showtime. Like it or not, we were under benevolent house arrest for the next eight hours. Or that was the plan until smoke started wafting into the studio. Jailbreak!

30 Rock was on fire—courtesy of a frying utility cable underneath the sixty-five-story building. Self-preservation kicked in the moment I heard the alarm and saw wisps of smoke. I had no interest in waiting around for a group consensus on strategy. Instead, I located the nearest fire exit and scurried down the stairs—all the while wondering if I was escaping danger, or heading toward it. A metal security gate clanged shut behind me when I reached the bottom of the deserted stairwell. Reversing course was no longer an option. Shit! Where was I? Was I trapped in a basement? Was this the end? So close to my TV glory? Mommy!

I pressed the emergency bar on the door in front of me and prayed it wasn’t locked. The door clicked open and freed me onto the sidewalk. I looked up and saw flames dancing from a window above the iconic NBC/Rainbow Room marquee. This was definitely not a drill.

The good news: I was safe. The bad news: it looked like my national TV showcase had literally gone up in smoke. I dodged the incoming fire trucks and crossed to the sane(r) side of the street. I saw a couple of Sting’s crew guys milling about on the sidewalk, so I flagged them down. Unsure of our next move, we teamed up and set out in search of a place that was not on fire. We dropped anchor at a nearby sushi joint and, with nothing better to do, sat … and ate … and drank. (Saké all around!)

Following a couple of hours of uncertainty, official word came down: the show would go on. We rushed back upstairs, but by that point it was too late to do the customary dress rehearsal. (Standard operating procedure at SNL involves an 8pm run-through in front of a live studio audience. Afterward, they clear the house, prune the show, and refill the studio with a new, drunker crowd for the actual broadcast. Our show is reportedly the only episode in Saturday Night Live history to hit the airwaves without a dress rehearsal.) Meanwhile, I’d been operating on a full tank of adrenaline before the fire drama, so now I was really jacked up. The prospect of performing with Sting on live TV was scary enough; no life-threatening emergencies required. The day had already been extremely memorable—and I’d yet to play a note.

We hunkered down in our dressing room/holding cell after being allowed back in the building. It was too early to start pacing the floor, so I decided to distract myself with some mindless instrument maintenance. I was hunched over, restringing my guitar, when I heard Delmar exclaim, “Yo Hiram!” I glanced up to see the tall, imposing figure of Mr. Hiram Bullock standing in the doorway. Best known for his work with Paul Shaffer on Late Night with David Letterman, Hiram Bullock was one of my favorite guitarists. In fact, Letterman’s house band (“The World’s Most Dangerous Band”) was one of my favorite bands. Shaffer’s quartet—and the Letterman show in general—had played a significant role in my obsession with NYC. I was a rabid fan of Late Night, watching the show religiously, long before my move north. I’d sit in front of the TV transfixed as Paul’s Hammond organ cued the opening sequence. The gritty montage of neon lights, crawling cop cars, and the mysterious steam rising from the streets made New York City seem like the hippest place on earth.

I was thrilled, yet thoroughly intimidated, that Hiram had turned up for our performance. And while I didn’t think it possible, the evening’s stakes had just gotten higher. In addition to the Letterman show, Hiram was also the guitarist in The Gil Evan’s Orchestra—which meant he’d played guitar on Sting’s studio version of “Little Wing.” One could make the argument that I’d snaked Hiram’s gig. Our tiny dressing room suddenly felt a little more crowded … and a lot more awkward. First a fire, and now Hiram Bullock. God had my undivided attention.

That familiar medley of excitement and fear churned in my gut as showtime approached. Fortunately, a visionary stagehand had clued me in on a private refrigerator tucked beneath the mezzanine. The secret icebox was stocked full of beer, and I’ll confess I snuck off to visit the hidden mother lode a couple of times before our performance. But at the risk of rationalizing, I’m sure I wasn’t the first—or last—self-medicated musician to take the SNL stage.

Zero hour. We kicked things off with Sting’s funky new single, “We’ll Be Together.” Our eight-piece band swelled to nine on the first tune as Sting’s assistant, Danny Quatrochi, was elevated to honorary band-member status. We were still in the process of sorting out various technical logistics, so Danny had been temporarily charged with triggering the Synclavier samples (horns/background vocals) used in the song. Due to severe space limitations in the 8H wings, the bulky keyboard had nowhere to go but onstage. Accordingly, Danny (aka The Synclavier Whisperer) followed suit. A few days earlier, when it was determined he’d be appearing on-camera, Danny was required to hastily join the Musicians Union. But Danny wasn’t the only one in our camp with labor issues. When I naively asked management if I also needed to be in the union, Kim Turner answered with his typical, dry British wit. “Only if you want to get paid.” Sufficiently motivated by Kim’s response, I rushed down to the Local 802 offices and signed on the dotted line. I’m proud to say I’ve been a member in good standing ever since.

After a few more comedy sketches, it was time for “Little Wing.” Retaking the stage during a commercial break, I noticed my buddy Hiram Bullock planted firmly on the front row. There he sat, arms folded, eyebrow raised, shooting me a chilly “this better be good” glare.

As “Little Wing” took flight, I quickly realized my amp wasn’t going to be loud enough to weather the coming storm. I stopped playing momentarily and reached down to boost my volume. The maneuver felt clumsy and amateurish, but I did what I had to do. And boy I’m glad I did. Lack of muscle would’ve totally undermined what turned out to be my shining hour.

Another interesting piece of body language occurred during the tune, but this move came courtesy of our frontman. As I stepped into the spotlight for my solo, Sting retreated to a chair tucked beside the drum set and unceremoniously took a seat. He turned his back to me, placed his chin in his hand and struck a pose of complete indifference. I’ll never know if Sting’s stagecraft was spontaneous or premeditated, but the tweak (and the mystery chair) was definitely there. In all fairness, Sting spun around after only a few seconds and gave me his full attention.

As my guitar solo reached its climax, Branford joined in on the final screaming note, creating a seamless segue into his sax solo. Branford’s lyric soprano calmed the waters and gently guided us back to the last verse. Then we went in for the kill. Sting stoked the coda, tossing Beatles quotes onto the smoldering fire. The intensity continued to grow until the song eventually blasted off into the stratosphere. With the stage volume boiling over, I saw Branford shake his head and grin, as if to imply “now THIS is rock ’n’ roll.” When the last power chord came crashing down, the audience went nuts. Sting wheeled around and shot me a look of “Hell yeah!” I exhaled. His smile made me feel like TWO million bucks.

Click here to order your own copy of Do Stand So Close: My Improbable Adventure as Sting’s Guitarist.

3 comments on “Performing on “SNL” with Sting”