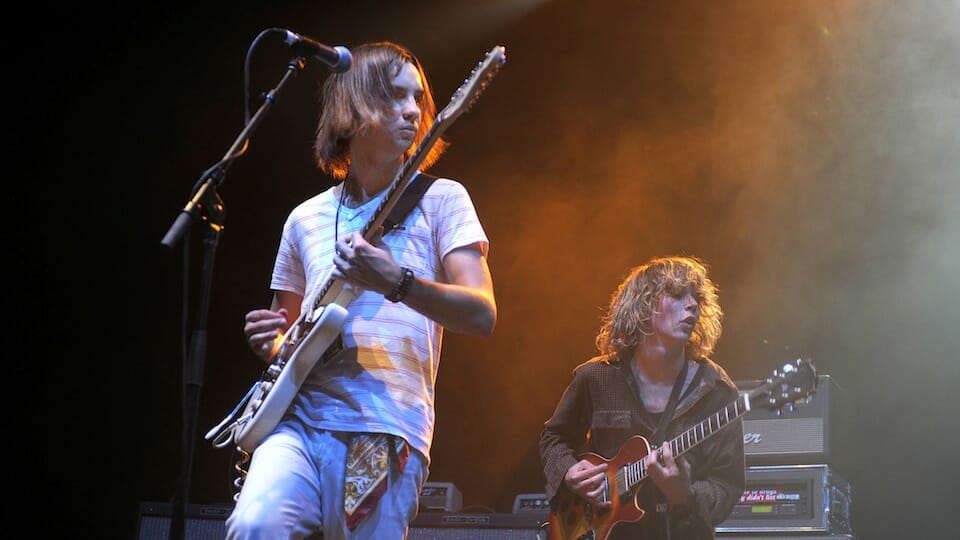 What exactly is “Beatlesque,” you ask? It’s a term that’s certainly been bandied about ever since the Fab Four shot to superstardom and one that is high in its implied praise. In a live Facebook event for CultureSonar earlier this year, renowned Beatle historians Kenneth Womack (The Beatles Encyclopedia) and Scott Freiman (Deconstructing The Beatles) duke it out with gusto as each gives his list of the five groups and/or artists over the years who he believes best warrants the adjective “Beatlesque.” It’s worth noting that Womack acknowledges that “Beatlesque” is often used to describe the “early ’60s sound that is associated with the British invasion” but that he and Freiman “are thinking in larger terms.” Freiman and Womack place great weight on ambition, evolution, wordplay, and gorgeous, lush melodies. Let’s see which groups hit that worthy mark according to our two experts.

Freiman acknowledges Squeeze is a personal favorite, adding that songwriters Chris Difford and Glenn Tilbrook have been referred to as successors to the Lennon and McCartney mantle. “Wonderful tunes, twists of harmonic phrasing, great humor. They also write about personal, deep things along with wider topics.” He also lauds the group’s willingness to try new things such as concept albums and a jazzier approach. One supportive anecdote: McCartney once told talk show host Tom Snyder that he listens to Squeeze. Beatle recognizes the Beatlesque!

Freiman dubs this group “The Australian Beatles,” singling out their song ‘Something So Strong’ in particular as so Beatlesque” as well as typical of the band at its best with its “great melodies” and “heartfelt lyrics.” He went on to say that Crowded House frontman “Neil Finn has been underrated” and wondered why “Chocolate Cake” (a terrific song mocking American excess) wasn’t a bigger hit?

Sure there are contrasts. As Freiman points out, ELO’s co-founder Jeff Lynne always makes a distinct imprint. “When you hear something he’s involved in, you know it’s Jeff Lynne” whereas “George Martin vanished into his production.” Still, Lynne has strong connections with the Beatles, including the making of George Harrison’s Cloud Nine and his shared time with The Traveling Wilburys. That said, “like The Beatles, he knows how to construct an atmosphere, as in ‘Mr. Blue Sky’ and ‘Telephone Line’.”

Freiman enthusiastically talks up this somewhat lesser-known group out of New Jersey that lasted for 5 albums, had a great songwriting team, and was mostly known for “Stacy’s Mom.” His case is compelling: “If you listen, their albums are filled with these wonderful pop songs with incredibly clever lyrics and ‘hooky middle eights,’ as the Beatles would say – those bridges in the middle. They are, to me, the new generation for that sort of pop song..”

Freiman enthuses: “Here’s a band that came out of England in the 1980s, started in punk but quickly realized they didn’t want to be a punk band – that was too simple. Even in their early punk days they were doing creative things and writing creative lyrics. Then they came out with beautiful lush albums like Skylarking.” They remained, until their demise in 2006, maestro songwriters with beautiful orchestrations, lyrics and harmonies. An excellent recent Showtime documentary called XTC: This is Pop suggests Freiman isn’t the only one hoping to get them more exposure!

Author Womack admits Cheap Trick is “…self-consciously Beatle-esque by their own admission” with some of their best songs never shy about that connection. Womack cites “Come on, Come on” from Live at Budokan as a stellar example of the band’s debt to The Fab Four. Furthermore, “Cheap Trick recorded ‘World’s Greatest Lover’ with George Martin. A soaring score by George Martin – by definition, that’s Beatlesque!”

Per Womack: “Billy Joel is a craftsperson who has said that he modeled himself after John Lennon, but really he has modeled himself after Paul McCartney.” Illustrating that point, he states “The Stranger is chock full with these winning compositions that catch your ear, excite you and then slide into a ballad.” Womack also sings the praises of The Nylon Curtain by tagging it “a kind of suburban Sgt. Pepper.”

Perhaps the least well-known group on the list, Womack couldn’t resist singling them out with a plea: “Please listen to them – they are very much about The Beatles’ psychedelic era, so I give them credit for being Beatlesque in a very specific way.” Womack then gets even more specific, describing Tame Impala as “a strange blend of mid- to late Beatles’ psychedelia and ‘Instant Karma’ John Lennon.” Admittedly, Womack says the relationship here is “less about lyrics and song structure, and more about an impressionistic kind of sound.”

Can sheer ambition qualify a band as Beatlesque? Womack thinks so! “The thing that is Beatlesque to me about Radiohead is the self-conscious desire to do something ambitious; I find that their ambition is what sets them apart. Great songwriters, a band that decided to do something very big, and do it well. That ambition brings us back to The Beatles and keeps us there.” Additionally, “‘Karma Police’ was written with The Beatles in mind.”

Womack’s reverence for Prince is deep. “I think Prince is perhaps the most Beatlesque of all the artists I’ve talked about. Not in the sense that he sounds like the narrow definition we discussed earlier, but take Purple Rain – what an ambitious work from top to bottom. There are no bad songs on that album.” Womack notes the array of very different and intricately crafted songs — a Beatlesque quality in itself. He goes on “And the guy could play. He’s an edgy Lennon-esque singer who didn’t mind getting dirty, and at the same time he’s Paul McCartney with rich, lush melodies.” He’s not who you’d expect to top this list. But then the Beatles defied convention, too, no?

Photo Credit: Kevin Parker and Nick Allbrook of Tame Impala perform on stage at the Hisense Arena on 15th May 2009 in Melbourne, Australia. (Photo by Martin Philbey/Redferns)