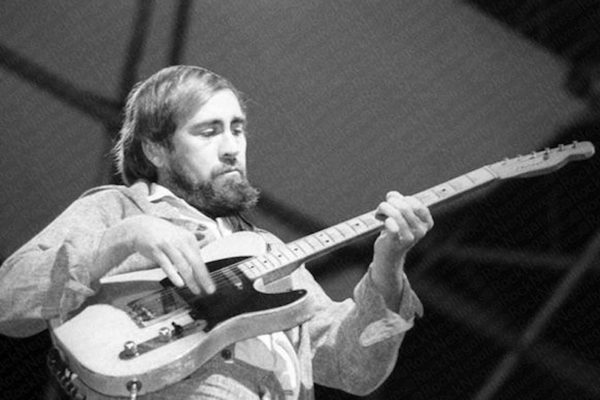 Roy Buchanan might have been the quintessential “guitarist’s guitarist,” earning the respect and admiration of contemporaries such as Eric Clapton and Jimi Hendrix, yet never achieving mainstream success. But one defines “success” on one’s own terms. As the artist himself said in the 1971 PBS documentary Introducing Roy Buchanan: The World’s Greatest Unknown Guitarist: “I didn’t care whether I made it big…all I wanted to do was learn to play the guitar for myself. You’ll feel it in your heart whether you’ve succeeded or not.” By the time of his untimely — and, some say, suspicious — death in 1988 he’d done much more than “learn to play,” having established himself as one of the premier American electric guitarists. His pioneering use of the full musical and sonic capabilities of the Fender Telecaster especially influenced the generation of guitarists who followed. Bass guitarist Jeff Ganz toured with Roy in one of his final lineups, a power trio also featuring drummer Ray Marchica. I had a conversation with the veteran NYC bassist recently, in which he shed some light on Roy Buchanan, both as man and musician.

Q: When did you first become aware of Roy Buchanan?

A: I was made aware of him like everybody else, watching the PBS documentary on television. When I heard him, he was always in a very traditional surrounding, like in a 4-piece rhythm section. But it was polite, swinging, rockabilly-oriented rhythm section playing, with his brand of guitar: everything that became popular that you could do on a Telecaster later, (only) he was doing it in 1959!

Q: How did the band come together?

A: I was recommended to be a local musician, which was his paradigm in the mid-‘80s; there were different versions of his band that didn’t last very long, and then it became not a band at all because he could make more money with “pickup” guys, because the people were not there to see anything but him. The fellow who produced the PBS documentary was named John Adams, and a mutual friend of ours named Scott Kuney recommended me to do the gig, and asked if I could get a drummer. So I recommended Ray Marchica. Ray has a very diverse resume, everything from Broadway pit work, to Dan Hartman, the Ed Palermo Big Band…this is a total musician, and one of my closest friends. The only time we ever got together to rehearse was the very first time he was checking us out on December 7th, 1984 at RCA Studios in New York.

Q: How was it that first time you played with him?

A: Analogous to what John Paul Jones said about the first day of Led Zeppelin, the room just exploded! ‘Cause you’ve got New York guys who are listening and adapting to the situation, and are being asked to contribute their own ideas; all of that happened very simultaneously. Our first gig was the next day at the Capitol Theater in Passaic, NJ, opening for Robin Trower. To be honest with you, it went so well that we got some heavy, heavy reviews in the Newark Star Ledger; the guy really liked the band! Also, because Roy knew about this band’s versatility, even from the first gig he started to experiment. Like, he goes “Hey Jeff, do you know ’The Lady Is a Tramp?’” I said, “Yeah!” He says, “Well, can you sing it?” And that’s what happened on the first gig: I sang “Lady Is a Tramp,” and it sounded like “I Saw Her Standing There,” with Roy trying to cop that exact groove! So he started trusting this band right away.

Q: What was the most fulfilling aspect of your experience with Roy?

A: My personal thing was when he was able to rip into a solo without a lot of accompaniment when it was just me and the 8-string bass with him. So there was a lot of room to do what he did and experiment, and then Ray and I kind of music-directed him with “stop time” and stuff like that, but never really took him out of what he did. When you’re playing with a more “traditional” blues band, you play your solos and then you stop and you’re comping behind somebody else. That isn’t really what happened in our band. It was him, and arrangements on the spot. There were a lot of things going on in my head simultaneously: it was like, I’m doing a gig, but I’m being asked to be me! Now I’m feeling 14 again, and idealistic about why I started!

Q: Roy gained the admiration of many legendary guitarists, but not their level of fame or recognition. How come?

A: The difference between Roy and those guys is that Roy was not the least bit conscious of his own image. He would get onstage and wear whatever he wanted to wear; he was not interested in any visual trends, he was strictly a real guitar player, you know what I mean? There were times when Ray and I wanted to leverage him into something bigger, and he simply wasn’t interested in pursuing it. It was a different kind of mindset; he just wanted to play the guitar, but he wanted to play his way. He was the antithesis of “showmanship.” He wasn’t lighting his guitar on fire, making himself look a certain way, or playing licks over and over to impress the crowd, like so many people are now. I think he was one of those guys who just wanted to work, but he was stuck being a genius! And with that came a lot of the demons.

Q: So he wasn’t conscious of his “brand?”

A: Hard to say…it seemed that way to me, but how do I know? He took all the real answers with him.

Writer’s Note: Mr. Ganz’s comments have been edited for brevity and consistency.

8 comments on “What Was It Like to Play With Guitarist Roy Buchanan?”