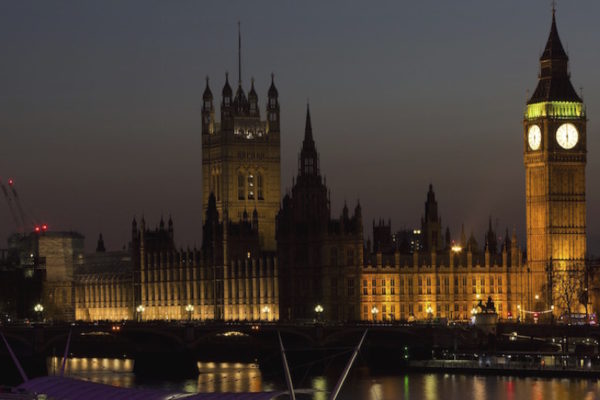 London’s streets throb with centuries worth of musical history, from monuments erected for classical maestros to roads made famous through album covers. From the British Invasion to Britpop to Grime, London has always been an epicenter for musical creativity and innovation and it’s in this city’s great halls and its dingiest dives that some of music’s most iconic legends have been made. Bowie, the Stones, The Clash, and Led Zeppelin are just a few of the icons that have called London their home. If you’re a music lover who’s yearning to see and touch real moments in music history, there’s no better city to do so. Can you hear that? It’s London Calling.

100 Club
Playing host to live music since 1942, this former WWII bomb shelter has earned legendary status among London music clubs. Countless historic shows have been staged on its humble underground stage, including sets by Louis Armstrong, [amazon template=right aligned image&asin=B01KWESCQW]Billie Holliday, Muddy Waters, The Kinks, the Sex Pistols and just about every notable Britpop band worth its salt. Its evolution from UK beat scene hotspot to R&B hub to punk rock mecca is ingrained in its walls, while its decor has changed little since the 1970s. Today, the 100 Club is still a top-notch venue for live music from both established musicians and up-and-coming bands, with big names occasionally showing up for “secret” gigs guaranteed to pack the 350-capacity space.

Abbey Road
Aside from Big Ben, double-decker buses, and the Queen, there are few things that scream “London” quite like that Abbey Road crosswalk. Made famous by the Beatles’ album cover, the Abbey Road zebra crossing has become a pilgrimage site for fans of the Fab Four. The crossing is just outside the famed Abbey Road Studio where the Brit invasion band recorded their much-loved tracks, and although you can’t actually visit inside the studio, you’re more than welcome to recreate the infamous album cover on its original site. Just be sure to mind the traffic!

The Spice of Life
This Soho stalwart is known for both current concerts and past legendary performers who have passed through its doors. In the ‘60s and ‘70s, The Spice of Life was the spot for folkies like Bob Dylan, Paul Simon, Cat Stevens, The Strawbs and Sandy Denny. Later on, the bar became a regular haunt for punk rockers including The Sex Pistols. Although Soho today is a far cry from the edgy, counterculture nerve-centre it once was, The Spice of Life keeps the area alive and kicking with its regular live-music nights, still attracting many top artists to perform.

Ronnie Scott’s
Another Soho institution, Ronnie Scott’s has been at the forefront of the jazz scene since it opened in 1959. Originally established as a small basement nightclub where local musicians could jam, these digs swiftly became the place to see and hear the biggest names in jazz: Sarah Vaughn, Count Basie, and Miles Davis among them. Today, this West End institution is still London’s hottest venue for jazz music, as the club continues to present genre heavyweights like Wynton Marsalis, Cassandra Wilson, and Kurt Elling  – who sometimes favor the intimate atmosphere over a bigger concert hall.

Denmark Street
The UK’s own “Tin Pan Alley” is a 100-yard stretch on the outskirts of Soho. Both NME and Melody Maker had their headquarters on this street, and most of the major music publishing and management companies of the ‘50s and ‘60s were on Denmark Street too. And it’s not just the small recording studios where the Kinks, the Rolling Stones and Elton John laid down their early records that saw some action; sometimes the late David Bowie could be found sipping coffee in La Giocondo cafe’. A lot has changed since Denmark’s Streets golden days as a music mecca, and nowadays Denmark Street is a sad promenade of near-identical guitar shops. Nevertheless, its musical legacy can still be seen if you know where to look, like the outbuilding of 6 Denmark Street which still has traces of graffiti drawn by none other than Johnny Rotten.

The Roundhouse
If there was an exact date that made London the coolest city on Earth, Oct 15th 1966 might be a contender. That’s the day when Pink Floyd and Soft Machine (neither yet signed to a label) played an all-night launch party for International Times (IT) at the Roundhouse in Camden. Gone down in history as one of the most “cerebral”ventures of the ‘60s alternative press, this event put the Roundhouse –  and these two iconic bands – on the map forever. This legendary cultural venue is where Led Zeppelin played their first London gig, and later on in 1976, the Ramones and Patti Smith would bring US punk to the UK via this treasured venue. Today, the Roundhouse is a go-to destination for some of the biggest names in music, and acts as a hub of culture and artistic expression for aspiring creatives.

The Good Mixer
It might not look like much from the outside (or the inside for that matter), but this small Irish pub in the heart of Camden is an integral part of iconic “Britpop” history. The Good Mixer is where Firschmann and her band Elastica signed with Deceptive Records and also where Menswe@r are said to have formed. It is also rumored that here, in the pub’s humble surroundings, is where Oasis and Blur’s famously bitter rivalry began. Amy Winehouse used to come here and play pool while knocking back a few pints before heading out on the town. There’s a sense of rebellion ingrained in this bar’s history, and it continues to keep the spirit of rock n’ roll alive with its regular live music nights that are a favorite among the Camden crowd.

PS.  If you’re a jazz lover, here are the must-visit joints in NYC.  And get to know the music scene of Sin City.

0 comments on “A Music Lover’s Guide to London”