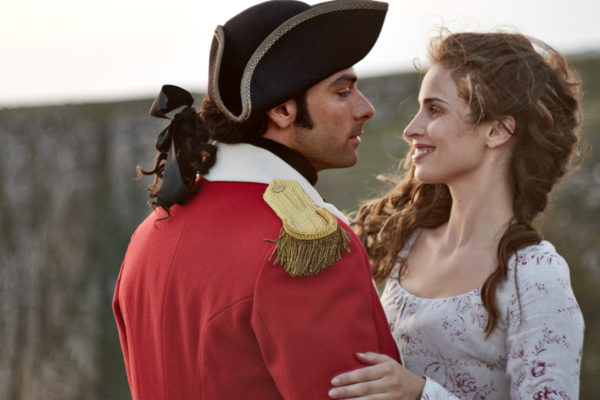 For fans of British drama (and good TV), there’s no denying that Sundays just haven’t been the same since Downton Abbey aired its final episode in March. But one word has me looking forward to Sundays again — Poldark. This PBS Masterpiece series returns tonight for a second season after a roller coaster ride of a first. If you want drama, boy does this show ever bring it. Strap in, keep the tissues handy, and feast your eyes on a wonderful leading trio of actors and some truly beautiful English scenery. (Hello Cornwall!).

Rising star Aidan Turner (The Hobbit) plays the title character, Ross Poldark, a stubborn, gritty, resilient hero who continually tries to do right in the world. The series (based on novels by Winston Graham) begins as Ross, a soldier from Cornwall, is returning home after battling in the Revolutionary War. It is anything but a happy homecoming. Ross finds out his father has died, his lands are in ruin, and his true love, Elizabeth, is engaged to his cousin. Three strikes and you’re out, right? Not Ross. He becomes determined to restore his home and fortune – and lift up the poor of Cornwall around him as well.

Enter Demelza, played by the fabulous Eleanor Tomlinson (Jack the Giant Slayer). Demelza is a poor girl who left the home of her abusive father. Ross gives Demelza work at his home — but soon their relationship becomes much more. Still, thoughts of Elizabeth (played by Icelandic beauty Heida Reed) are never far from Ross’s mind, and this love triangle continues to bubble throughout the first season.

The drama also comes through Ross’s family ties – and his business rivals. His cousin Francis (Kyle Soller) is not the most likable guy, though he pales in comparison to the detestable young banker George Warleggan (Jack Farthing). The series follows the challenges faced by Ross and the people in his village whose livelihoods rise and fall with the success of the nearby copper mines, but whose fates ultimately rest in the hands of those with money.

A lot happens in Season One — romance, scheming, tragedy — and it comes to an end with Ross’s fight for social justice landing him in a very tricky situation (to say the least). I can’t go into all of it, but I encourage anyone who hasn’t seen the first season to binge watch it and then catch up with Season Two, which promises — what else?&#!51; more drama.

Poldark is an all-around satisfying show, with a great supporting cast, wonderful period costumes, music, and sweeping views of the beautiful Cornish coastline. The show also isn’t afraid to show off its main man. For those who know the Darcy lake scene in 1995’s Pride and Prejudice, keep an eye out for Ross’s scything scene (wink, wink).

By the way, if Poldark as a series sounds familiar, that’s because it’s been on PBS before back in the late 1970s. Robin Ellis was the star then and he returns in a different role in this remake (see if you can spot him). And while I think I will always miss the Crawleys, I’m eager to get reacquainted with the Poldarks.

0 comments on ““Poldark” Brings High-Class Drama Back to PBS”