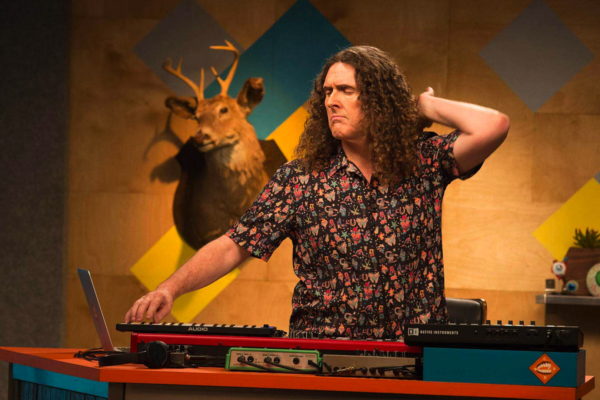 From his repeatedly spot-on music video spoofs to his hilarious cult classic film UHF to his current crazed co-hosting of Comedy Bang! Bang!, Al Yankovic – better known as “Weird Al” – has been mercilessly tickling our funny bones since the 1980s (who can forget “Another One Rides the Bus” or “Eat It”?). But while his stardom may be now cemented on YouTube, his TV appearances are equally memorable and even more manic. Only know him from perfect pop parodies? Here are five freakily great examples of Weird Al turning up the eccentricity dial from ten to eleven, oh hell, to twelve.

1. Comedy Bang! Bang!
(Season 1, Ep. 10: “Weird Al Wears a Different Hawaiian Shirt”)
Scott Aukerman’s show bumped up Weird Al from guest star to co-host and bandleader this season. While the IFC series has always excelled at poking fun at talk shows, Weird Al’s presence can take an episode into crazy-land in a heartbeat. Just check out his first appearance in which he gets to lead a daring rescue. “Goddammit, give me an Emmy already!” We agree. He’s priceless.

2. My Little Pony: Friendship is Magic
(Season 4, Ep. 12: “Pinkie Pride”)
Yes, the Weirdness of Al also translates when he’s just a voice of a cartoon. In this animated series for young and old bronies alike, Weird Al can be heard as the character Cheese Sandwich: a party-planning pony who goes head-to-head against the ever-cheerful Pinkie Pie. Songs with random non-sequiturs ensue and horse sense is learned. Even in a career filled with many WTF moments, the “why am I laughing” sentiment stands out here. And yes, there’s a polka.

3. Teen Titans Go!
(“Two Parter: Part Two” (Season 2, Ep. 18))
Darkseid may be one of the most feared villains in the DC Universe, but give the tyrannical megalomaniac a lozenge to suck on and he sounds surprisingly like…Weird Al. Still, Yankovic’s Darkseid is one bad mofo: lasers come out of eyeballs, stuff gets blown up, and it takes a team of Titans to take this dude down. Interestingly, both the Titans and Darkseid are fans of Weird Al, but for completely different reasons. You can decide which team you’re on.

4. Robot Chicken
(“The Munnery” Season 2, Episode 32)
Weird Al’s 2006 hit song “Weasel Stomping Day” gets the Robot Chicken treatment. If you’re partial to furry rodents, you probably should skip this altogether.  But if not, you’re get ready for some serious “oh, no they didn’t” moments. Ah, Adult Swim. How you love to take it there. We cannot look away.

5. Wet Hot American Summer: First Day of Camp
(“Auditions” Season 1, Episode 4)
A prequel to a camp classic, this series debuted on Netflix in 2015. Every sleepaway camp needs good kid-friendly entertainment, and what could be more entertaining than a hypnotist played by none other than Weird Al? Just wait until the end of the episode when you find out what his true purpose at Camp Firewood is. It’s not making pseudo-adolescents cluck like chickens and moo like cows.