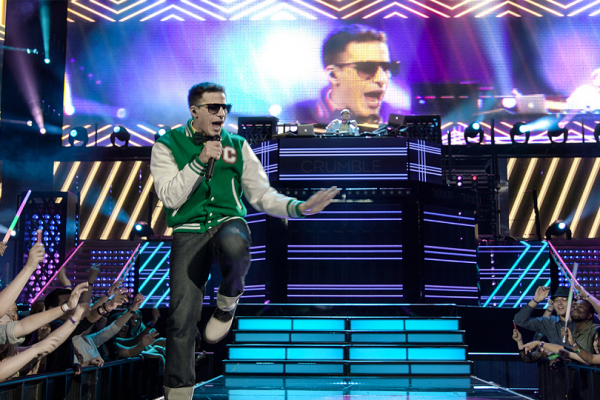 Once upon a time, the world was in love with the Style Boyz, a rap trio made up of childhood friends Conner (Andy Samberg), Owen (Jorma Taccone), and Lawrence (Akiva Schaffer). But when Lawrence splits after receiving zero credit for writing Conner’s award-winning lyrical verse, Conner reinvents himself as Conner4Real with Owen as his DJ composing his beats. Their first album blasts through the top of the sales charts and lands Conner in super stardom, so naturally he soon gets to work on his second album…in which he writes all of his own lyrics and hires about a hundred producers to write the beats instead of Owen. The result is a trainwreck of a journey through bad business decisions, a toxic partnership with up-and-coming hip hop artist Hunter the Hungry (Chris Redd), and hijinks and public humiliations galore, all on the path to stardom that may never come.

Popstar: Never Stop Never Stopping poses one simple question: can the comedy music group The Lonely Island carry a feature length movie? The answer…yes, and it’s pretty damn amusing. The movie juggles many comedy styles — slapstick, gross-out, deadpan, juvenile, absurdist, visual humor, shock humor, and more — and pulls them off spectacularly. Do they all get a laugh? No. But the many that do make you laugh loud and hard, while occasionally wondering if you’re going to Hell for doing so.

Movies about and starring pop stars and musical groups, especially documentaries, tend to be regarded very poorly because it feels like they exist to stroke the musicians’ egos. The Lonely Island, however, are comedians first and musicians second, so their goal is to entertain the audience, not show everyone how cool or “like us” they are. The film itself is actually supposed to be a satire of Justin Bieber, the title even referencing his own documentary Never Say Never (which makes it especially trippy when Justin Bieber himself cameos). In fact, the entire movie was a harsh and very accurate lampooning of pop celebrity culture, complete with overly blown egos and a brutal and well-deserved skewering of TMZ.

While I did enjoy this film immensely, I have a feeling that it’s not going to appeal to everyone. It’s true that it goes through a lot of comedic styles, but it’s a very particular brand of comedy — doing something so wrong and incorrect that it could be nothing but parody (a sort of unclever cleverness) — and I don’t know how that will gel with most people. I certainly enjoyed it, but I’m an irregular sort. Basically, listen to songs by The Lonely Island like “I’m on a Boat,” “Like A Boss,” and “Threw It On The Ground” and you’ll have a pretty good idea if you’ll like this. For me, it’s worth it for some truly outrageous songs.

Fun Tidbit: This film is loaded with cameos from the music industry, including Ringo Starr, Usher, Questlove from The Roots, Simon Cowell, Snoop Dogg, Seal, Carrie Underwood, and even Weird Al. Justin Timberlake and Michael Bolton deserve special mention as they have collaborated with The Lonely Island before. However, there’s one notable one that may have slipped past most people: Danny Strong, the creator of the show Empire, which centers around the internal politics of a hip hop company. He appears as Conner’s “perspective manipulator,” which means he stands next to Conner in photo shoots to make him look taller.