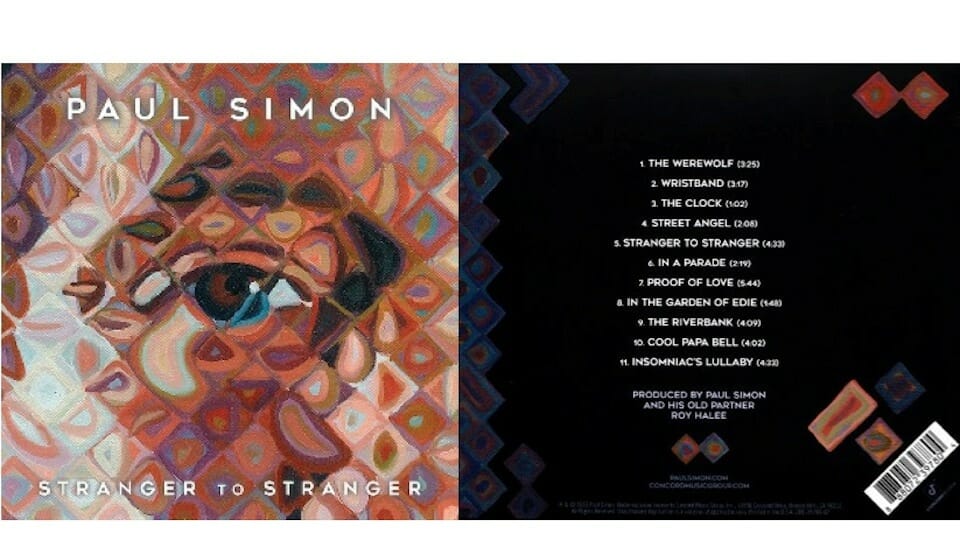 On the cover of Paul Simon’s album Stranger to Stranger, the Grammy-winning singer/songwriter stares mysteriously through a veil of colored glass painted by photorealist Chuck Close. The painting seems to filter Simon’s image through a prism, a perfect metaphor for the unique timbres on his latest album. On Stranger to Stranger, Simon’s 11th solo album since the breakup of Simon & Garfunkel, it’s Simon’s music that is filtered — through electronics, rare instruments, and multiple layers of percussion. Take the album’s opener, “The Werewolf.” It calls to mind the rhythms of Simon’s Graceland and Rhythm of the Saints with doo-wop harmonies that conjure up his latin-tinged musical, The Capeman. The song opens with a Gopichand, an Indian instrument which when played sounded to Simon like it was saying “the werewolf.” Over a rhythm of talking drums and Flamenco dancers, Simon delivers one of his funniest lyrics:

The werewolf is everything we’re afraid of — death (“most obits are mixed reviews.” says Simon), taxes, poverty, ignorance. “The Werewolf”’s complex music bed is not a gimmick. It’s a perfect setting for Simon’s anxiety as he looks at life from the wise old age of 75.

We tend to think of Paul Simon as the poignant songwriter of classics like “Bridge Over Troubled Water.” But, Simon’s humor has always been an important part of his lyric writing dating back to songs like Simon & Garfunkel’s “Baby Driver” or his own “Stranded In A Limousine.” This humor is ever-present throughout Stranger to Stranger, but as in “The Werewolf,” it often leads to serious issues.

The same thing happens in “Wristband,” about a rock star who accidentally gets locked outside the stage door. It’s another funny lyric, but it ends up being a metaphor for the disenfranchised, the “kids that can’t afford the cool brand, whose anger is a shorthand.” They never get a wristband, sings Simon.

“Wristband” has an accompaniment of little more than percussion and a bass. The Italian electronic dance music virtuoso Clap! Clap! (Digi G’alessio) contributed the rhythm bed to this song, as well as “Werewolf.” Elaborate rhythms provide the backdrop to most of the music on Stranger to Stranger as Simon collaborates with conga drummers (“Street Angel”), Flamenco dancers (“Stranger to Stranger”), clappers (“Riverbank”), and more.

Simon’s search for unusual sounds brought him to a 20th century composer named Harry Partch. Patch wrote music for a 43-note scale (as opposed to the Western 12-tone scale), and he built a variety of instruments to perform his microtonal music. Simon makes use of many of these instruments throughout Stranger to Stranger, including cloud-chamber bowls, chromelodeons, and the amusingly-named zoomoozophone. They provide interesting colors to Simon’s arrangements on songs like “Cool Papa Bell” (based on the Negro League baseball player — “the fastest man on Earth did dwell, As Cool Papa Bell”) and the instrumental “In the Garden of Edie.”

Although it’s not a concept album, Simon does reuse and transform characters and images on several songs. The visionary street angel of “Street Angel” returns in “In A Parade.” But in the latter song, he’s being treated as a schizophrenic. The wolf of “Werewolf” also returns, this time in the album’s closer, the lovely “Insomniac’s Lullaby.” To the other-worldly textures of some of Partch’s strange instruments, Simon lies in bed listening to the sirens and angels. He eventually falls asleep…

If any track is going to make you have trouble sleeping, it’s “The Riverbank.” Simon wrote it after visiting Walter Reed hospital in Bethesda, Maryland. He tells the story of an “army dude” whose mother is left with nothing but a triangle-folded American flag. Simon combines this story with lyrics inspired by the Newton, Connecticut school massacre:

High school is closed,
Same for the local police.
Shall we tearfully embrace?
Shall we sing “Amazing Grace”?
Will the shallow river waters bring us peace?

In a few lines, Simon has perfectly summed up the country’s frustration with ongoing gun violence and the uselessness of another moment of silence, another chorus of “Amazing Grace.”

“The Riverbank” is just another example of how Paul Simon has helped us make sense of the world since he wrote “The Sound of Silence” more than fifty years ago. Stranger to Stranger proves yet again that Simon is one of popular music’s greatest and most creative songwriters and that his latest album is another Simon masterpiece.

Photo Credit: Fair use images of the front and back cover of Stranger to Stranger.

3 comments on “Paul Simon: Still Ragin’ After All These Years”