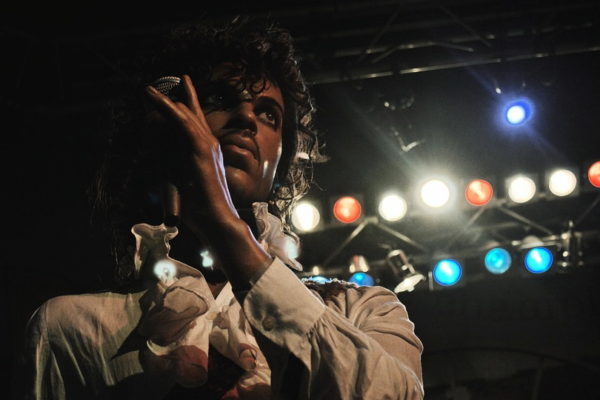 He’s the ferocious young artist sporting a mash-up of a James Brown/Little Richard bob on the cover of his self-titled 1979 album. The Jheri-curled, velvet-wearing “Kid” of Purple Rain. The guy who changed his name to an unpronounceable symbol, and is rumored to have dozens of unreleased albums locked in a vault in his Paisley Park studios. He is Prince, the Purple One. He’s taken on the music industry, been parodied by Dave Chappelle and can induce a state of teen-fan awkwardness in his fellow established stars.

[amazon template=left aligned image&asin=B000E6EHI6]And now, this famously private artist has announced that he’s writing a memoir. Yes, people – Prince is putting it all down on paper in an upcoming book, tentatively titled The Beautiful Ones. Prince Rogers Nelson first learned music by picking out the notes to his favorite cartoons on the piano. His father was a jazz musician, and a young Prince saw how the ladies swooned; it didn’t take long for him to see that this might be an “interesting” career path. While he’s dated everyone from Kim Basinger to Sheena Easton to Madonna (rumored to be the subject of “Raspberry Beret”), music has always been first in his life.

Before he was 15, he could play a dozen instruments. His current tally is 27. He composes music for his dinner parties, and challenges his band-mates to see who can write the most songs in a 24-hour period.

Despite being only 5-foot-2, he’s an incredible basketball player (and has been known to play in his trademark high heels). He doesn’t own a cell phone, likes to cook omelettes and pancakes and only sleeps 3 hours a night. He owns a pair of custom “light-up” roller skates that he carries in a locked briefcase.[amazon template=right aligned image&asin=0790731533]

These are some of the very few personal details about Prince that have come out over his three-decade career. As someone who writes an 80s music show and spends a fair amount of time researching him, I can tell you that new tidbits are like spotting a Yeti — rare (just as he likes it – he often demands his guests “check” their phones, along with their coats so as to discourage any social media sabotage. He also doesn’t allow tape recorders at interviews). So news of this upcoming book is kind of making people lose their mind.

We’ll see just how much the Purple One shares when The Beautiful Ones comes out in Fall 2017. In the meantime, his music will just have to do the talking for him.

PS. While we’re on the subject of musicians’ memoirs, check out our post on Chrissie Hynde’s revealing book here. You may also be interested in our post A Different Kind of “E” Book with more on a page turner by Elvis Costello and another about Elton John.

0 comments on “Prince Is About to Open Up — Sort Of”