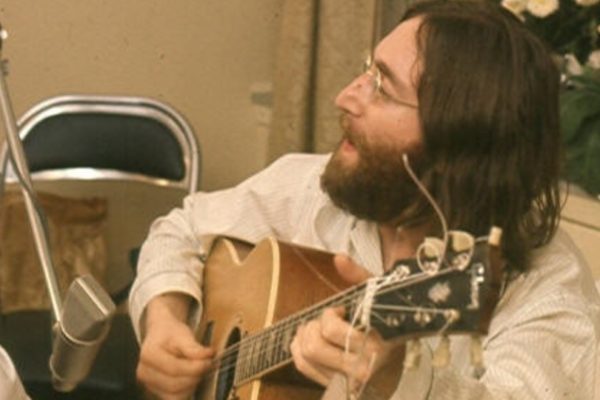 Editor’s note: This is one of our most popular posts, from a while back. Given our current, volatile political climate, it seemed worthwhile to think about it again. One of the things we wonder is what form of expression the current generation will choose. Will it be music? Social posts? Something else? In any case, the 60’s generation made its choice clear…

Without putting too fine a point on it, America’s politics are … unsettled. Once upon a time, music was a way for highly-engaged participants to make their views known. Back in the 30’s and 40’s, for example, Woody Guthrie and Pete Seeger gave voice to labor struggles, while the ‘70s and ‘80s saw massive, star-studded efforts to protest nukes, raise awareness about world hunger, and protest apartheid. But no decade quite matches the 1960s for the sheer number of songs that compelled folks to rise up and act for change. Here are ten of the most memorable.

1. Bob Dylan’s “Only A Pawn In Their Game” (January 1964)
“God On Our Side,” “Blowing in the Wind,” and “Times They Are a Changin’” could all have made this list but “Only A Pawn In Their Game” somehow feels exceptional even amid that company. The lyrics caution us to look beyond the “finger that fired the trigger” killing civil rights activist Medgar Evers in 1963 to the broader culture of white supremacy: politicians stoking hatred, pitting the “poor white man” against his black neighbor, so that the former “never thinks straight about the shape that he’s in.” Frankly, it’s as relevant today as it was back then.

2. Nina Simone’s “Mississippi Goddam”(March 1964)
The murder of Evers no doubt informed “Mississippi Goddam,” too. The track’s bouncy rhythm teases us with the idea that it “is just a show tune,” as Nina Simone says early on. Gradually, though, the frenetic pace underscores the existential despair of the song’s narrator, who has “hound dogs” on her trail and thinks every day’s “gonna be her last.”

4. Phil Ochs’ “I Ain’t Marching Anymore” (August 1965)
This rousing number leads us through a litany of battles, noting that it’s “always the old to lead us to the war.” And “It’s always the young to fall.” By the time we reach the “final mission in the Japanese sky” we feel the determination in the singer’s voice and believe him when he declares: “I ain’t marchin’ anymore.”

5. Barry McGuire’s “Eve of Destruction” (August 1965)
This Barry McGuire song tackles racism, hypocrisy and injustice. It was vilified by the establishment and banned by radio, which no doubt made it all the more appealing to the young, who helped drive it straight to number one even as the war in Vietnam continued to escalate.

6. Aretha Franklin’s “Respect” (April 1967)
Civil rights and anti-war weren’t the only battle cries as women organized and demanded equality in the ’60s, too. In his original 1965 version, Otis Redding delivers this song’s themes of love, sex and deference with typical passion and flair. But Aretha Franklin’s 1967 rendering turns it into a feminist anthem, empowering all those held down as second class citizens to stand up and demand a little R-E-S-P-E-C-T!

7. Country Joe and the Fish’s “The Fish Cheer/ I-Feel-Like-I’m-Fixin’-to-Die Rag” (November 1967)
This jaunty ditty sounds like it came straight out of Spike Jones’ repertoire. One suspects that Country Joe McDonald would like that analogy. What better way to demonstrate the cruel absurdity of war then to couch it in the zany trappings of a vaudevillian Vietnam number in which there “ain’t no time to wonder why” ‘cause “Whoopee! we’re all gonna die”?

8. James Brown’s “Say it Loud (I’m Black and I’m Proud)” (August 1968)
James Brown had children sing the call and response on this 1968 song, because he wanted them to “grow up feeling pride.” The track continues to resonate and inspire, but its black power message cost Brown a significant crossover audience at the time. Well, the dollar isn’t everything!

[amazon template=right aligned image&asin=B00W2XBH5A]9. Plastic Ono Band’s “Give Peace a Chance” (July 1969)
Recorded in a Montreal hotel room where Timothy Leary, Abbie Hoffman, Dick Gregory, Allen Ginsburg, Tommy Smothers, Petula Clark and a crowd of others banged on tables and doors, while John and Yoko sang from their bed, this song recreates the hurly-burly vibe of a mass demonstration and is still chanted wherever people assemble to protest war.

10. Creedence Clearwater Revival’s “Fortunate Son” (September 1969)
The sign of a good protest song is its ability to spark debate, even years after it was penned. John Fogerty found himself defending his 1969 song’s message about the hypocrisy of flag wavers who send others off to war and justifying its performance at a 2014 benefit concert for veterans. Now that’s lasting power!- Colm Clark

PS. While we’re on the subject of protest songs, check out our posts on Leon Russell and Lee Hays, musicians who left their mark (albeit in different eras).