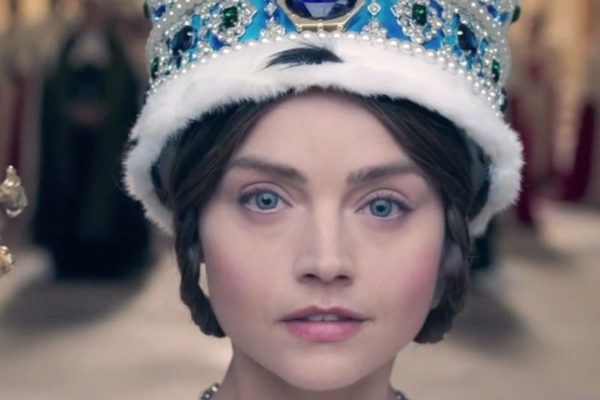 Given that the first season of PBS’s Victoria has just wrapped up, now seems like the perfect time to look back at the various film and TV incarnations of Queen Victoria. This British monarch took the throne at the tender age of 18, then following her husband Albert’s death, mourned him while ruling England for the remaining 40 years of her life. Her extraordinary mix of strength, intelligence, and vulnerability have prompted countless depictions of the “widow of Windsor” dating all the way back to silent flick The Victoria Cross in 1916. But let’s not go that far back in time. Listed below are five of our favorite portrayals of “Vicky” from the last two decades – give or take a year.

If anyone can erase the image of Queen Victoria as a stuffy “grand dowager,” it’s Jenna Coleman – best known as Clara from Doctor Who. Victoria was a spirited teenager when she took the throne, and in the masterly crafted PBS series (already renewed for a second season), Coleman’s sympathetic depiction of the youthful monarch charts her evolution from a willful adolescent with a controlling mother to the impressive young leader of the British Empire, with time for falling in love along the way.

Period drama means period garb, plain and simple. In the case of this retelling of Queen Victoria’s life, those clothes are so gorgeous that they earned this biopic an Oscar and a BAFTA award for Best Costumes. Stunning visuals aside, Julian Fellowes’ screenplay combined with Emily Blunt’s turn as the young ruler keep this recounting of the early part of her reign accessibly human. Bolstered by a star-studded cast — Rupert Friend, Miranda Richardson, Paul Bettany, Jim Broadbent and Mark Strong — and Ilan Eshkeri’s stirring score, this film of Victoria’s not-so-humble beginnings make for a quite satisfactory Anglophile fix.

One good icon deserves another! Queen Victoria has popped up as a historical character in the episodes of landmark TV shows more than a few times: Ripper Street, Drunk History, Northern Exposure, Monty Python’s Flying Circus… Still, one of her best appearances has got to be here in this Doctor Who episode which finally solves the mystery as to why hemophilia ran in the British royal bloodline for countless generations.

Can’t understand why Victoria went into mourning for 40 years after her husband died? This miniseries will make her reasons clear in two ticks. Not only is watching actress Victoria Hamilton transition from adolescence to adulthood as a queen a marvel in craft, but her costar Jonathan Firth’s Albert is just as nuanced and noteworthy. Like The Young Victoria, Victoria & Albert starts with Victoria’s life under the thumb of her oppressive mother and her mother’s comptroller, John Conroy. This version also features Diana Rigg, who’s slated to appear in Season 2 of Victoria.

Though this popular film does reinforce the idea of Victoria as the stern dowager, no list devoted to the monarch would be complete without mentioning Judi Dench in Mrs. Brown. While Victoria did mourn her beloved husband until the day she died, there are also suspicions that she found happiness again with the companionship of her Scottish manservant, John Brown (played here by the excellent Billy Connolly). The story of two older people finding love again despite the disapproval of all around them is a moving one, and Dench and Connolly together light up the screen. Rumor or truth, this film never fails to stir up all the feels.

PS. For a look at other period dramas you might enjoy, check out our posts The “Down Under Downton Abbey,” “Poldark” Brings High-Class Drama Back to Sundays, and Did You Hear the One About the Vicar and the Detective?

0 comments on “There’s Something About Vicky”