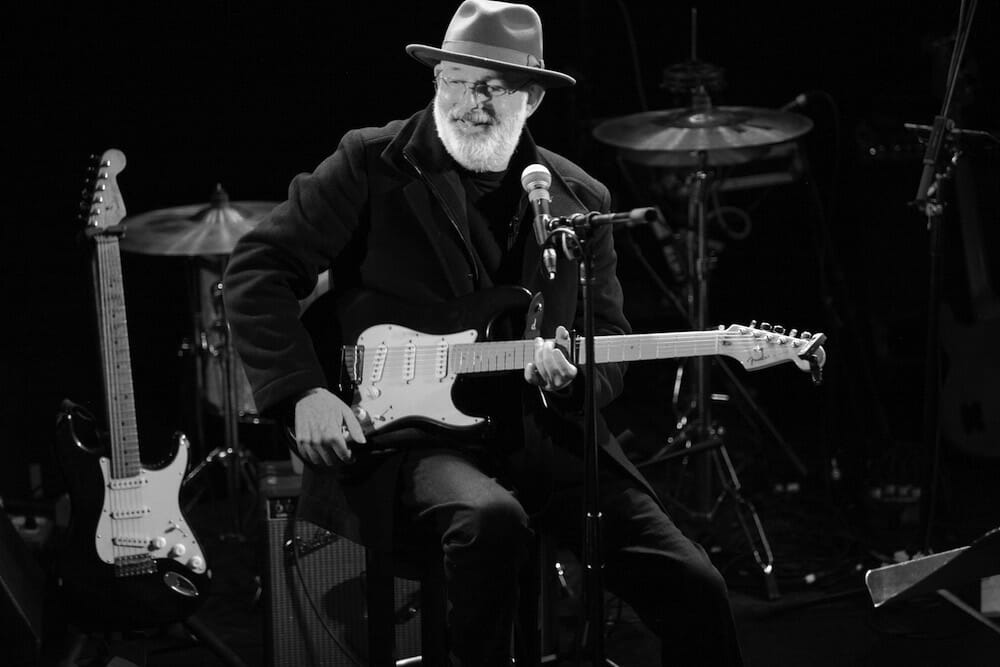 Singer-songwriter Jack Tempchin is one of those “He wrote that too?” guys. For while best known for his songs recorded by The Eagles (“Peaceful Easy Feeling,” “Already Gone”), he also wrote memorable numbers for Emmylou Harris, George Jones, and Glen Campbell. His biggest chart hit: Johnny Rivers’ cover of “Swayin’ to the Music (Slow Dancing).” Tempchin’s recent solo release, 2017’s Peaceful Easy Feeling, features his renditions of his most famous tunes while his next album just might feature a bunch of unreleased songs he wrote with Glenn Frey. For the moment though, he spoke with CultureSonar recently about his some of his most iconic lyrics.

Q: First one, Jack: “I found out a long time ago what a woman can do to your soul / Oh but she can’t take you anywhere you don’t already know how to go.”

A: Well, that’s right at the heart of the song. When Jackson Browne was doing a live record (Solo Acoustic, Vol. 1), he had a speech about how people would request him to do “Peaceful Easy Feeling” because they thought he wrote it. And he started playing the song and, when he got to that line, he stopped and he said, “Well, that’s not true. A woman can take you all kinds of places.”

I would just say that both of those statements are totally true. In the context of the song, the waitress I had arranged to meet later didn’t show up and I’m waiting for her stranded in an unknown city in this little nightclub all night. And I had been falling in love with lots of women. I thought, “Well, I’m gonna give up all this chasing around.” Part of the idea is when you give up looking for something, a lot of times that’s when you find it. Your looking was getting in the way. In that context, the guy is saying, “You can reject me, you can approve me, you can show up, you can not show up, but what you do is not gonna have any effect on the real me.”

See Related: “Perfection Is Not An Accident”

Q: The Eagles recorded that song on their debut album. Did you have any inkling what was ahead for those guys when you handed the song over?

A: No, I didn’t. I had known Glenn for a long time and he was great. When they brought the album back from England, Glenn brought it to my house in San Diego and he played the record. And after he played the first three songs (“Take It Easy”, “Witchy Woman”, “Peaceful Easy Feeling”), at that point I was thinking, “Gee this is the best thing I’ve ever heard.” I became a believer right then.

Q: Next up: “I got some news for you, and you’ll soon find out it’s true / And then you’ll have to eat your lunch all by yourself.” What was the big deal about lunch?

A: I was thinking about this recently. Later in my career, I wrote “Partytown” with Glenn Frey and it goes “I packed up my car and I got some gas / And I told everybody to kiss my ass.” But when I was growing up, you wouldn’t say “kiss my ass” in polite company. It definitely wouldn’t be on television or on the radio. So we didn’t have access to those powerful words. I was just looking for some way to say “Buzz off” and fortunately that popped into my head.

Q: By that time, The Eagles were established superstars. So how special was it that they used “Already Gone” as the first single from On The Border?

A: It was incredible. The fact that they were doing another one of my songs was amazing and the fact that they chose it as a single, it all unfolded like a dream. There’s no way to know it’s going to happen. Then after it happens, it’s just like, “Oh sure, that happened,” when, really, it’s completely unlikely. Every hit song is just a miracle if you’re ever involved in one.”

“Swayin’ to the Music (Slow Dancing)”)

Q: Next lyric: “And we just flow together with the lights are low / Shadows dancin’ all across the wall.”

A: You know I had fallen in love around that time and I was living in this little house by the beach. And those lines just came right from me falling in love and dancing in the dark.

Q: You did a beautiful duet of this song with Rita Coolidge on your most recent album. Had you ever envisioned the song as a duet, because it turns out it works great as one?

A: Well, Rita had just been signed to Blue Elan records, which is the label I’m on. They suggested that I do the song with her and I said, “How can I do that?” But then I got the idea to rewrite it and make it a duet. I had recorded it, and then we went out to LA and Rita put on her vocals. When I got back, we took everything off the recording, except we found a guy in San Diego who played the piano part. So the record was Rita, myself, and the piano, and that’s the way I really liked it.

The Girl From Yesterday (written with Glenn Frey)

Q: Next up, Jack: “She dreams of his returning and the things that he might say/But she’ll always be the girl from yesterday.”

A: The title was Glenn’s idea. And then we kinda got into it, and all of a sudden we were sitting there going, “Man this is getting pretty sad. How are we gonna end the song?” We’re like the deities looking down from Mount Olympus going, “Well are we gonna crush this girl forever or is the guy actually gonna return?” It was difficult. Glenn and I looked at each other. I think when he said, “The Girl From Yesterday,” he was thinking of a relationship that had ended. So we said, “We’re gonna make it sad.” And I just wanted to get across with those lines the fact that she’s still thinking of all the things she’s gonna say to him like you do, but she’s never gonna get the chance to see him come back.

Q: Was that a song that you and Glenn had in reserve or did you write it specifically for Hell Freezes Over?

A: We wrote that when we were still writing songs for Glenn’s albums. We wrote songs for his albums from 1980 to 1994, so we had 14 years’ worth of songs and they didn’t all get on the albums. So he recorded that with The Eagles which was super-great. I still have some songs that I’m recording right now that I wrote with Glenn.

“Part of Me, Part of You” (written with Glenn Frey)

Q: Last one, from Thelma and Louise Soundtrack: “Whatever time may take away, it cannot change the way we feel today.”

A: We got a script and we read it. But I think Glenn had already thought of a song called “Part of Me, Part of You.” It’s that scene in the end when they’re driving the car. I’m pretty sure it was my line. Just kinda saying, as with all relationships, time is gonna change it, but this is real.

Q: This has to be one of those songs that has taken on even more meaning to you after Glenn’s passing because it’s a commentary on a friendship and you guys were so close.

A: Absolutely. I had a lot of moments when I was recording it and doing the video (for the version from solo album Peaceful Easy Feeling). I just did it with a guitar overlooking the beach. I had a lot of moments thinking about Glenn. And since then I’ve written a couple of songs about my feelings, missing him. You have to do that.

Photo: Jack Tempchin at the Troubadour in Los Angeles, California on May 7, 2015. (Photo by Jim Steinfeldt/Michael Ochs Archives/Getty Images)