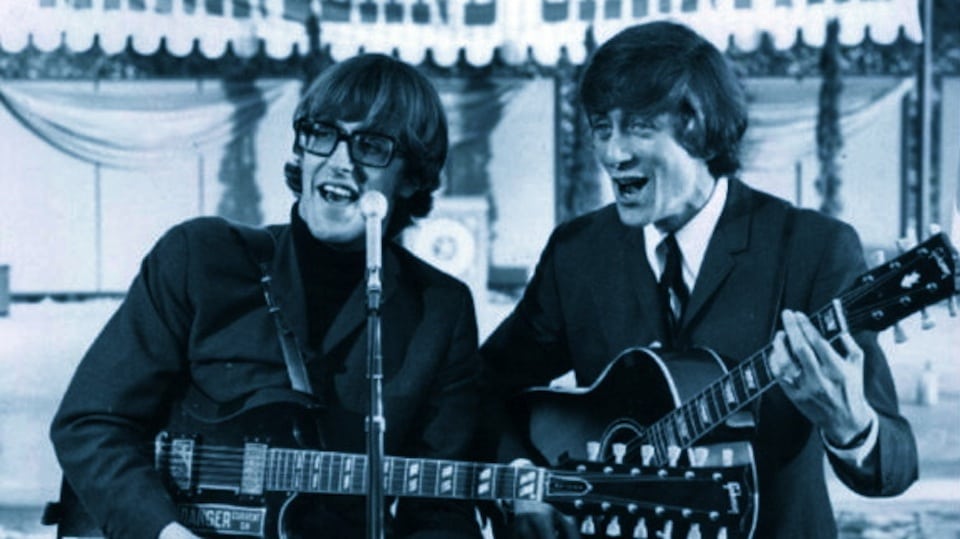 1968 was a watershed year for rock music and the counterculture, particularly for leading graduates of the 1964 British Invasion such as The Beatles, The Rolling Stones, The Who, and The Kinks, still pushing the boundaries of expression and experimentation, while peer hit-makers The Dave Clark 5 and the Merseybeat bands faded away. Though not as well known today, Chad Stuart and Jeremy Clyde, better known as “Chad & Jeremy” were charming English harmonizers who joined the British Invasion with their 1964 Top 10 hit, “A Summer Song.” Their initial success grew on a string of television appearances (including Batman) and elegantly-produced records that fused Brit-pop with goth-folk, a fairly unique combination.

In 1967, Chad & Jeremy brought their own soundtrack to the Summer of Love with Of Cabbages and Kings, a literate album of songs informed by British humor, psychedelia, and social commentary, and revealing a shared songwriting ability as well as Chad’s notable finger-style guitar-playing akin to that of John Fahey and Bert Jansch. At this point, the pair contractually owed one more album to Columbia Records. A big example had been set by label-mates Simon & Garfunkel who, in April 1968, released their sonically-stunning psych-folk masterpiece Bookends, tied-in with the hit film The Graduate. Could C&J do something like that?

Chad, aching to do film soundtracks, spotted an opportunity via a screenplay based on Stephen Yafa’s novel Paxton Quigley’s Had the Course. Like The Graduate, the title character is a college-aged man in search of meaning but in this case, he’s also a Lothario who serially cheats on three women. Jeremy quickly wrote a catchy pop micro-opera that summarized the basic story.

It wasn’t the only muse at work here either. Charles Bragg’s painting, “The Ark,” prompted the LP’s title song, a sparkling suite of orchestrated rock that set the tone for the album. During the recording, Jeremy was perturbed by Boettcher’s Tesla-like tweaks, but Chad the arranger thrived on the process.

The LP kicks off with “The Emancipation of Mr. X,” about a disillusioned businessman who snaps and goes nude in the local park. Next comes the head-sweeping “Sunstroke” (by Keith Noble, co-writer of “A Summer Song”), arguably one of the best uses of sitar and tabla by a rock band. Bittersweet lyrics and arresting arrangements enrich “The Raven,” “Painted Dayglo Smile,” and the hope-for-a-better-world tune “Pipe Dream.” More musical muscle gets flexed in the ambient instrumental “Pantheistic Study for Guitar and Large Bird” for which Stuart recorded Fahey-esque guitar parts while his newborn son sat nearby. On the lighter side is the motivational “Imagination” — which sounds like a deep cut for The Monkees — as well as the rock star in-joke “Transatlantic Trauma 1966.” The album closes with a Monty Python-ish novelty anthem, “You Need Feet.”

So with all these surefire components, why did this project sink into a sea of obscurity?

For one, the duo was finished. Chad moved to America while Jeremy went to work on an acting career in the U.K. That meant, no touring to promote The Ark. Furthermore, Usher went way over budget and was fired from Columbia, who then wrote it off and did little promotion. Finally, the “Quigley” project was wrested away by the filmmakers and re-named “Three in the Attic,” a sexploitation flick that flopped. Everyone distanced themselves from it.

Over the years, The Ark was re-discovered by audiophiles and fans of “great lost albums.” It was properly reissued on CD in 2009, and the reformed Chad & Jeremy now includes much of The Ark in their current set. Despite its stormy history, The Ark endures as an astonishing musical vessel.