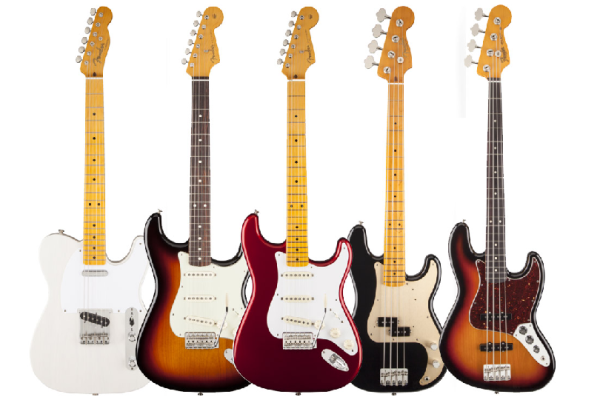 Numerous sources point to a rapid decline in sales of guitars. Fender in particular has seen a steep drop in revenue. Anyone listening to recent pop hits will notice a marked absence of guitars. Of course, the rock band has not disappeared – indie rock bands and acoustic-oriented combos such as The Avett Brothers and Mumford & Sons run counter to the rise of EDM and related synth-based music.

But clearly, the trend for the last ten years is less guitar, more synths, and virtual instruments. Even some of the guitar sounds you do hear on pop records may be software plugins, not fingers on strings (mea culpa, one of the solos on my album in progress was created this way, though there are plenty of real guitars all over the rest of it).

Why is this happening? That’s a complex question, but I want to focus on one possible culprit: changes in amplifier technology, and their effect on the approach of players to recording and performing.

Traditional guitar amps were either “tube,” meaning their power and sound production was based on vacuum tubes such as were found in all kinds of electronics until the 1960s, or “solid-state,” designed around printed circuit boards. Most will agree that tube offers a warmer, more harmonically complex sound, while solid state is prized for sonic flexibility and lighter equipment loads. This is a big topic in itself, but both of these amp types have become old school in recent years.

Starting in the mid-90s, companies such as Line 6 began to offer what are known as “modeling amps.” These amps use algorithms to emulate a wide range of amp and effect and speaker combinations. Recent models allow users access to literally thousands of tones, or “patches.”

I’ve used all three kinds of amps. Each has its advantages. I won’t try to settle the question of which sounds best, though I will say that I vastly prefer tube amps for recording and most live situations. To my ears, modeling amps have trouble sitting comfortably in a live mix, requiring unnaturally high volumes to be heard well in a room.

That said, I think the real damage done by these new amps is the way they have made guitars much more like keyboards, both in sound and in function. The guitar is reduced to an input device, while the amps offer sounds so radically different from each other that selecting among them requires the same mindset as that of a keyboardist selecting a synth patch.

The patches in modeling amps are rarely as viscerally present as the classic guitar tones; they are in fact often designed to blend with modern synth-based arrangements. Producers can be forgiven for seeing the guitar as one more synthetic sound choice. In fact, why bother with flawed guitar players when you can use a keyboard to compose easily editable virtual guitar tracks that to most modern listeners are indistinguishable from the real thing?

In sum, while these tools are amazing in themselves, I argue that they have made the guitar feel less necessary in the studio, and have encouraged a gradual impatience among engineers with anything as messy and unpredictable as an actual player using dated tech.

What do you think? Has new amplifier tech accelerated the “decline” of the guitar?

PS. While we’re talking guitars, check out our post When Dylan Plugged In and Changed Everything. Or Not. for more on the controversy surrounding Bob Dylan going electric in 1965. Plus, you might be interested in our posts How Pop Was Born In West Africa and An Instrument that Remade Jazz, Rock, Soul and R&B for a look at instruments that have made an impact on music through the years.

2 comments on “Has Technology Killed the Guitar?”