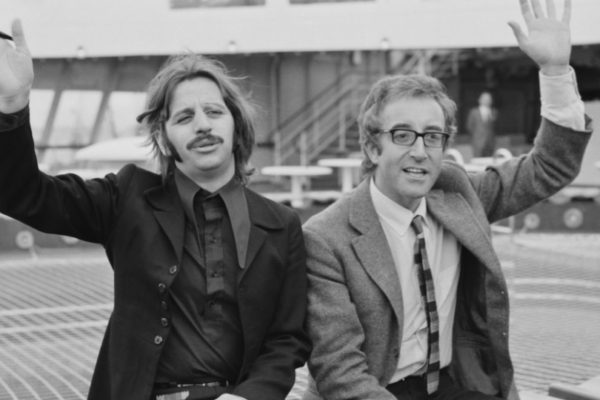 Was it fate that inspired Ringo to sing “They’re gonna put me in the movies/They’re gonna make a big star out of me” in The Beatles’ 1965 cover, “Act Naturally?” Or did he somehow sense, even then, that film would become a big part of his professional life after The Beatles parted ways? This despite the fact that Ringo had no formal acting training — but then again, he had no formal musical training either, and that didn’t stop him from becoming one of the world’s most beloved rock drummers. His films outside the Fab Four range in quality from “underappreciated cult classic” to “unforgettable mess.” But each is worth checking out — if for no better reason than to celebrate Ringo’s natural charm and willingness to engage in the delightfully weird.

Candy (1968)
After sharing the screen with his band mates in A Hard Day’s Night (1964), Help! (1965) and Magical Mystery Tour (1967), Ringo’s first solo film was also his first opportunity to portray a character not named “Ringo.” In this taboo-breaking satire based on the novel by Terry Southern (Dr. Strangelove) and adapted by Buck Henry (The Graduate), Ringo plays Emmanuel, a Mexican-American gardener who briefly loves — and quickly loses — the free-spirited title character. The ethnic jokes, such as they are, haven’t aged especially well, but it’s fun to see Ringo this far from his Liverpudlian roots. Candy features a star-studded cast that includes Marlon Brando, Richard Burton, James Coburn, John Houston, Walter Matthau, and John “Gomez Addams” Astin.

The Magic Christian (1969)
Ringo’s next was another Terry Southern satire, this one starring Peter Sellers as a wealthy, childless businessman who adopts a homeless lad (our man Ringo). Together, they conduct a series of anarchic, borderline sadistic social experiments to see just how far people can be manipulated and degraded for money. (Spoiler alert: very, very far.) It’s Sellers’ show, but Ringo holds his own in a role not far from his laid-back, Beatles persona. Fans of Monty Python take note: Graham Chapman and John Cleese provide additional material, and both appear briefly in the pic. The film is also notable for its soundtrack, featuring the Beatles-esque Badfinger song “Come and Get It,” written and produced by Paul McCartney.

200 Motels (1971)
In this Frank Zappa passion project, Ringo plays “Larry the Dwarf,” a bewigged narrator who looks a lot like Zappa. The production was famously a mess (as recounted in the YouTube-able 1988 doc, The True Story of 200 Motels) but you can’t help but notice Ringo is having a blast, as in the scene where he tries to molest a harp-playing nun played by The Who’s Keith Moon. Another key character is played by Ringo’s chauffeur, who had never acted before — or since. He came by to drop off cigarettes for his boss, and was cast as a last-minute replacement for Wilfrid Brambell (“Grandfather” in A Hard Day’s Night) who had walked out during rehearsal.

Blindman (1971)
By now, Ringo had appeared in six scripted features, all comedies. Hoping to avoid typecasting, he agreed to play a villain in this spaghetti western produced by Beatles manager Allen Klein. And to his credit, Ringo demonstrates real range, suppressing his usual boyish charm as a ruthless bandit who exploits and kills women. The part inspired Ringo to record a theme song, also called “Blindman,” but the film’s producers elected not to use it.

That’ll Be the Day (1973)
This is considered by many to be the best of Ringo’s post-Beatles films. In this drama set in 1950s England, he plays a savvy carnival worker who mentors a fatherless young man in the ways of rock ’n roll. This more serious role is a departure from the Ringo we generally know but that doesn’t mean we can’t still love him.

Son of Dracula (1974)
On paper, this one sounds like a blast: Ringo and fellow pop star Harry Nilsson in a rock ’n roll horror comedy, directed by Hammer Films stalwart Freddie Francis. But Ringo fails to turn on the magic charm as the wizard Merlin. He was a producer on the film (on behalf of Apple Films) and it seems like the stress of his dual duties put a damper on his charisma.

Lisztomania (1975)
Ringo bounced back in his next movie, directed by Ken Russell (Tommy), by most accounts his best director since Richard Lester (of Help!). This fantasy presents a surreal version of the life of composer-pianist Franz Liszt, reimagining the 19th century classical music scene through the lens of 1970s rock stardom. In an amusing turn as the Pope (!), Ringo reasserts his undeniable charm.

Sextette (1978)
Raise your hand if you knew that Ringo co-starred with Mae West in her last film. Raise your other hand if you knew it was directed by the man who made Chitty Chitty Bang Bang? Anyone got both hands up? Anyone? No? Well, god bless the then-85-year-old Mae for thinking she had one more innuendo-soaked comedy left in her, some 40 years after her heyday. Ringo acquits himself well as one of West’s many ex-husbands. The cast — another all-star ensemble — includes Timothy Dalton, George Hamilton and Tony Curtis, alongside rockers Keith Moon and Alice Cooper.

Caveman (1981)
Finally, we wrap things up with the best known of Ringo’s post-Beatles films (and the one most likely to turn up on cable TV in the wee hours of the night). This near-wordless Stone Age slapstick doesn’t take itself too seriously, and neither does its star. You can’t help but appreciate how thoroughly Ringo commits to the goofy physicality here — and how committed he is to co-star Barbara Bach, whom he met on set then married later that year. The two have been together ever since.

0 comments on “The Fascinating But Forgotten Films of Ringo Starr”