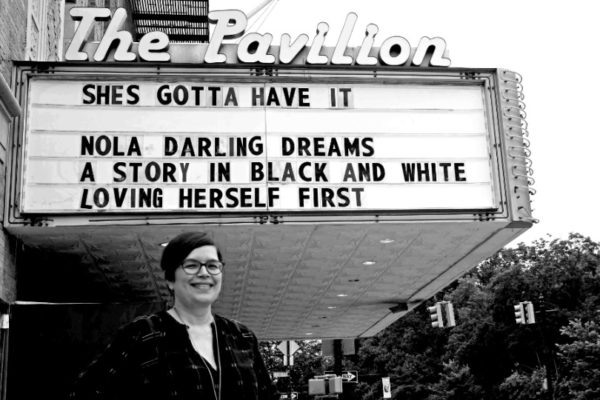 Over the past few months, the movie marquee at the long-shuttered Pavilion Theatre in Park Slope, Brooklyn has served not so much as space a for advertising what’s playing (the theater is currently being renovated by new owners Nitehawk Cinema), but as the site of an art installation project for which haiku based on movies are displayed. The project — entitled Movie Marquee Poems — is the brainchild of Saint Flashlight, an art duo consisting of Molly Gross and Drew Pisarra. Gross took some time to answer some questions about the project’s genesis and her own involvement as well as what lies ahead.

Q: You contributed a haiku to the first batch of Movie Marquee Poems. What is it about She’s Gotta Have It that inspired you and what was your process like?

A: Seeing She’s Gotta Have It when it came out in 1986, I was enthralled with Nola Darling who was also a young woman and one listening to her own counsel. Women are inundated with messages about being pleasing and getting along; Nola was centered in her own truth. Writing my haiku, I honed in on her spirit considering phrases such as “at peace with herself” and “freedom.” Spike Lee filming in black and white was memorable for the 80s era, so I also wanted to mention his aesthetic choice.

Q: The first three months Saint Flashlight has been focused on movies set in Brooklyn. Is there a movie that wasn’t chosen that you’d secretly like to see a haiku written for? What is it and why?

A: Because we chose films with wide name recognition, that precluded titles under the public’s radar. As a cinephile who had worked on BAMcinématek’s team for many years, I had a front row seat to watch many films when they were released. One of my all time favorites was Jim McKay’s Our Song (2000) which follows three teenage girls living in Crown Heights, including Kerry Washington, as they make their way into young adulthood. I am definitely drawn to stories about women coming of age.

Q: Can you share a little about your own history as a poet?

A: I’ve been writing poems since I was a kid. Poems by writers such as César Vallejo, Anne Carson, and Rainer Maria Rilke have been an inspiration, as is hearing contemporary poets read their works at venues like St. Mark’s Church where the Poetry Project presents readings weekly. Since moving to New York in 2001, I started gathering my poems in chapbooks every few years. You can read them on my website. Two of my favorites appeared in the great online platform Diagram.

Q: What themes will you be doing in the upcoming months with Movie Marquee Poems?

A: Through September we are featuring films set in Brooklyn. In October, we will run a series on Halloween films focusing on contemporary works such as Get Out and Let the Right One In and classic Hitchcock films; November there will be a call for haiku from the public; December will highlight holiday films; and we will end the project in January with poems on the act of watching films.

Q: What’s been the public reaction to this project?

A: As we installed the poems, people came up to us curious about the theater as it has been closed for a while. Online, we have seen photos on Instagram posted by people who are playfully engaging with the poetry on the marquee. And last month, after a wonderful article about our project appeared in the New York Post, a woman from Spike Lee’s office contacted us. On a call, she said that Lee had seen my She’s Gotta Have It haiku and thought it was great. That was a thrill.

2 comments on “The Poetry of Cinema”