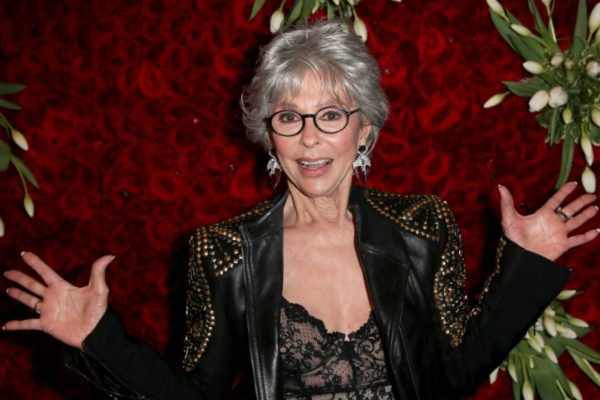 From 1971 to 1977, Rita Moreno, as Millie the Milk Lady, yelled her catch phrase “Heyyy youuu guyyys!” every week on the PBS children’s show The Electric Company. Millions of American kids grew up watching Moreno, Cosby, and others teach reading through a sketch-oriented, Laugh-In style format. On January 6, 2017, Rita Moreno, as Cuban-American grandma Lydia Riera, yelled “Heyyy youuu guyyyys!” on the Netflix reboot of the sitcom One Day at a Time. That’s a long time to wait for an easter egg. What was Moreno up to in the meantime? Well, for one thing, other than a three year hiatus from 2007 to 2010, she has been consistently working in primetime TV for 40 years, winning two Emmys in the process (Rockford Files and The Muppet Show). Moreno has been steadily busy on stage as well (she won a Tony for The Ritz in 1976), in both musical theater and straight drama.

[amazon template=right aligned image&asin=0451416376]Before The Electric Company she had already won a Best Supporting Actress Oscar for West Side Story, oh and by the way, she has a Grammy for a children’s album, and a Presidential Medal of Freedom. All of this, over a seven decade career, and yet somehow she has a relatively low profile in show business, compared to, say, Betty White. That may be partly by choice, and I don’t want to make more of it than it is. But I think it’s worth pointing out a few things about Moreno’s career and its possible significance to later popular culture, especially series television.

Rita Moreno was born in Puerto Rico in 1931 to a seamstress and a farmer. She worked at 11 dubbing American films into Spanish, and made her Broadway debut with a young Eli Wallach in Skydrift in 1945. She was on the cover of Life in 1954 with an article titled “Rita Moreno: An Actresses’ Catalogue of Sex and Innocence.”

She worked through many “exotic” roles she found frustrating and distasteful, such as a South Asian exchange student on Father Knows Best. Even with an Oscar on her shelf, she struggled to find meaty roles until 1971, when at the age of 40 she broke through (again) in a big way, and in a decidedly odd way. That year, she had a key role as an upscale hooker in Mike Nichols’ Carnal Knowledge… and a starring role in a hit children’s television show.

Since her burst of fame in the 70s she has been a steady presence on TV, and it’s here I believe her hidden contribution lies. This clicked for me when I saw her on Jane the Virgin. I realized I was watching a woman who had slowly carved out space for herself as a character actress, building out the reality of Hispanic womanhood in broadcast television over many small and not so small roles. And now I saw her working in a series that, among others like Devious Maids, massively benefits from that difficult, most likely humbling work which Moreno and others did over decades.

This connects for me with the sense that early television built up a vocabulary of gesture and narrative, across cheap and trashy formats, which now becomes available to auteurs. Analogously, actors like Moreno did the brush clearing work of broadening and deepening the available characterizations for other actors and stories to come. I tip my hat to her, and I wish work like hers was more fully acknowledged among the many strands of our popular culture. It almost makes me want to yell, “Heyyy Youuuu Guyyyyys!!”

0 comments on “Hey You Guys! Rita’s Back on Netflix!”