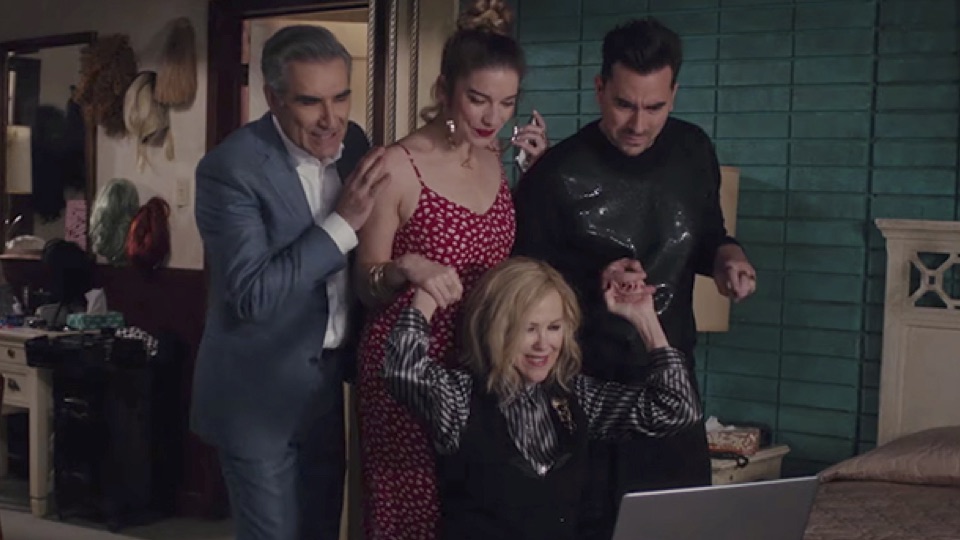 A “Rose” by any other name would be just as sweet if played by Catherine O’Hara, Eugene Levy, Dan Levy, and Annie Murphy. Unlike the character of Moira Rose trying to remember the name of vintner Herb Lintfinger, fans will not soon forget the names of Moira, Johnny, Alexis, and David. If you’re late to the game and haven’t yet made Schitt’s Creek your favorite binge, you still have time to watch the first five seasons of the show on Netflix before its final season ends on Pop and CBC.

Schitt’s Creek could very easily have relied on standard sit-com humor for laughs. On the first watch of the pilot, I dismissed the show, thinking it would mine its comedy by spoofing Kardashian clones and poking fun at the stereotypical rubes living in Schitt’s Creek. After a few episodes, I can’t believe I ever thought this about a show that has perfected the art of leaving you feeling good, while keeping you laughing.

It only takes a few episodes into Season 1, to see the journey that showrunner Dan Levy has set up for the Rose family: to go from the penthouse of life, to what they think is an outhouse of a town, only to find themselves and regain their sense of family. The beauty of this show is how it takes an outrageous premise and grounds it in humanity. We love rooting for the Roses as they slowly rediscover their sense of self, through the relationships they develop in and around the motel and the café in Schitt’s Creek. Here’s a look back at the sweetest moments from the first five seasons of Schitt’s Creek.

5. Patrick Comes Out to his Parents- Season 5- Episode: Meet the Parents

“You’re going to laugh yourself right out of the closet with this one.” In any other comedy, a moment as important as Patrick coming out to his parents could be the emotional apex of the show. Dan Levy has always strived to fill the show with love and watching David develop this easy chemistry with Patrick in Season Four has taken fans’ obsession for the show to another level. In the episode, David plans a surprise party for Patrick and when Johnny assumes that Patrick’s parents know about David and Patrick’s relationship, David has to break the surprise to Patrick before the party. You can’t help but put yourself in Patrick’s shoes when he nervously tells David that his parents are “good people” but he still worries they may see him differently. The audience finds out Patrick’s parents didn’t care that he was gay before Patrick does, but it’s still an emotional hurdle that Patrick needs to get over. Patrick’s “coming out” to his parents brings his family closer together. It’s another classic Schitt’s Creek scene that has you laughing through a choked-up throat as Patrick and David dance.

To say Moira had let her relationship with Alexis slip away before they arrived at the motel is an understatement. Moira really stepped up to the plate in this episode after she sees that Alexis is in a funk and decides to push her back into the dating world. Moira offers to drive Alexis and Twyla on their “girl’s night out” at The Wobbly Elm. “Sometimes in life and in love risks must be taken,” says Moira while telling Twyla and Alexis the story of her almost-dalliance with JCM (John Cougar Mellencamp).

Moira doles out pearls of relationship wisdom to Twyla, who happens to find success using Moira’s hook-up trick at the bar. This scene shows just how far Moira and Alexis’ relationship has come since the days where Alexis would accompany her to the Playboy Mansion and hang out in the “children’s grotto.” This poignant moment really drives this point home;  Alexis’ maturation is on full display when she chooses to leave the bar alone, and asks for the keys from a drunk Moira.

By the end of Season 5, David is no longer a fish out of SoHo but he’s still David, which makes Patrick’s choice to take him on a hike, a challenging setup for a perfect proposal. David is as out of place on a hike as Roland Schitt would be at The Met Ball. It’s a testament to just how much faith Patrick has in their relationship, and the comfort level they share, that he would choose to take David so far out of his comfort zone.

Some relationships ebb and flow before that peak where two people are completely comfortable. Patrick and David had that easy chemistry from the moment Patrick walked into Rose Apothecary. Dan Levy wisely gave the show the time for the audience to grow to love the character of David with all his quirks, before introducing Patrick. As a viewer, it’s been refreshing to see a gay relationship build in such a natural way.

Anyone can see themselves in Patrick and David’s relationship. As David shouts “Where’s the bear?!,” after Patrick steps on a branch, I knew I was the “David” in my own relationship. The moment Patrick asks David to open the front pocket of his bag, you can’t help but feel the butterflies-in-the-stomach-nervousness of the moment for both characters. Watch it for a second time and you still may get four lumps in your throat, one for every ring in the engagement box.

After spending the season furthering the personal growth that has seemingly grounded Alexis and David in the town of Schitt’s Creek, the final episode of Season Five puts the spotlight on Stevie through her leading role in the town production of Cabaret. From the very beginning of the series, the flannel-clad, dead-pan delivery of Emily Hampshire, as “Stevie Budd,” the small-town girl who was never just a small-town girl, was our window into Schitt’s Creek. While Stevie helped the Roses adjust to the shock of their new life, her bond with the family helped her become more confident in realizing she could have more in life than just sitting behind the desk at the motel.

As it became apparent that Stevie and David were meant to be friends, the show wisely partnered Stevie up with Johnny in earlier seasons to give her a father figure and a mentor she could rely on. In Season 5, when Moira cast her as Sally Bowles in Cabaret, it was Moira’s confidence in Stevie and a well-timed backstage pep talk that helped Stevie get over her insecurities and let her budding rose bloom.

“I call you when I need you, my heart’s on fire…” It only takes Patrick one line to capture the heart of David, Moira, the crowd at Rose Apothecary, and everyone watching. As a fan who has rooted for David for four seasons, the scene takes you along for the emotional ride that David is experiencing. In under a minute, my reaction went from “Oh my God! Patrick can sing” to “Oh my God! This is the sweetest thing I’ve ever seen.”

If you love Schitt’s Creek, you can’t help but get swept up in the moment. The tear-jerking scene is executed perfectly and set up by the fact that the viewer has no clue that Patrick (Noah Reid) can sing, much less make a Tina Turner classic his own. After the episode aired in 2018, Dan Levy stated in a Twitter post that the only line he wrote in the script was “Patrick serenades David with an acoustic cover of Tina Turner’s ‘Simply the Best’.” Noah Reid arranged this version himself and each lyric feels like it was written by Patrick for David.

David’s hesitance to being serenaded in public by his boyfriend is also shared by Moira, which is why their reactions make this romantic moment so moving to watch. The camera deftly shows Moira welling up in pride, looking at him as he gets completely lost in the beauty of the moment, and she can see how much Patrick truly “gets” David. When Twyla (Dan’s real-life sister) glances at David, it’s a quick reminder that family and love are always at the heart of the show.

0 comments on ““Schitt’s Creek”: Best Moments from the Sweetest Show on TV”