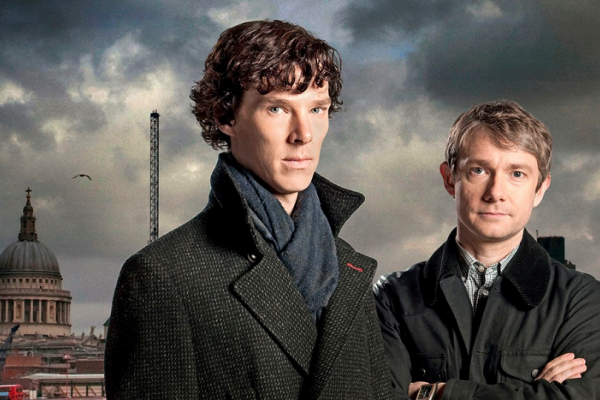 According to Guinness World Records, he’s “the most portrayed literary human character in film & TV.” But it’s the 21st-century version of Sherlock Holmes portrayed in the BBC drama Sherlock that has me enthralled. I admit I’m a bit late to the sensation that is Sherlock. The first series aired in Britain and on PBS’ Masterpiece in 2010 and there have since been two more series and a stand-alone special (more on that later). My brother begged me for ages to watch Sherlock so we could talk about it, and I finally binge-watched it on Netflix earlier this year. It is certainly worth your time – a fun, intriguing, suspenseful, and supremely clever show with terrific acting and writing.

Benedict Cumberbatch (The Imitation Game) won an Emmy in 2014 for his portrayal of Sir Arthur Conan Doyle’s famous detective and is nominated again this year. His partner in crime, Dr. John Watson, is played by Martin Freeman (The Hobbit), who also won an Emmy for his work on the series. Cumberbatch and Freeman are both wonderful and have great chemistry (who doesn’t love a great bromance?).

When we first meet Sherlock Holmes, he is examining and then beating a dead body, trampling on the nerves of shy morgue worker Molly Hooper (played by Louise Brealey) by noticing her lipstick, and then (nearly) perfectly analyzing Dr. Watson on their first introduction – with Watson saying hardly a word. (I’m always amazed that Benedict Cumberbatch can memorize all of the complex lines he has – and say them with such speed – and that Martin Freeman can keep a straight face during it all!)

It’s clear from his first meeting with John Watson that Sherlock is a master of what he calls “the science of deduction.” Really, he is a highly observant, logical, remarkably intelligent man who is also uniquely strange. He acts as a “consulting detective” for Scotland Yard, putting mere mortal detectives to shame time and again. But Sherlock is definitely not without his faults (a drug addiction comes into play).

Dr. Watson comes with his own baggage (scarred by his time served in Afghanistan), but he and Sherlock form a friendship and a bond that frequently gets tested throughout the series. They settle in at 221B Baker Street in modern-day London with their feisty landlady Mrs. Hudson (Una Stubbs) and begin solving crimes together, with Dr. Watson chronicling them in a blog.

Each episode of Sherlock is like a mini-movie, running about 90 minutes. There are only 3 episodes per series, so it’s easy to catch up. Episode names are fashioned after Doyle’s novels and short stories, and they are jam-packed with distinctive cinematography, camera angles, edits, flashbacks, etc. Movie quality for sure. The series soundtrack is also very enjoyable.

The series gets stronger as it goes on. We meet Sherlock’s archenemy, Jim Moriarty, in the third and final episode of series one (though he is alluded to earlier as well). Actor Andrew Scott plays Moriarty, and for me he does a good job since I find him so creepy and unlikable!

Some other characters you’ll get to know include Sherlock’s brother, Mycroft (played by series co-creator Mark Gatiss) and Mary Watson (played by Martin Freeman’s real-life partner Amanda Abbington). Both are important, strong, complicated characters and have plenty of surprises for the leading men.

I don’t want to spoil any of the plots of the episodes, but needless to say there is plenty of murder, kidnapping, intrigue, and plot twists and turns. Sherlock’s powers of deduction are constantly on display and consistently impressive. But even Sherlock Holmes can be brought back down to reality. I will say “The Sign of Three” (series 3, episode 2) may be my favorite.

That stand-alone special, “The Abominable Bride,” aired in January of this year, and it’s the only episode with a Victorian theme. The special has been nominated for 6 Emmys, and without giving anything away, it touches on a big plot point involving Moriarty.

Now is a great time to catch up on Sherlock (if you haven’t watched already), because series 4 will debut in early 2017. Series creator Steven Moffat promises it will be the darkest, most action-packed series yet. We also know Toby Jones will appear as another villain. Watch the trailer below, along with the series 1 trailer. The game is afoot!

0 comments on “Sherlock: The Game Is On”