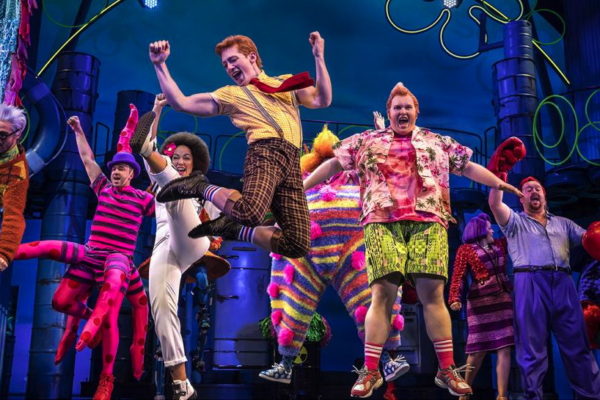 I first encountered SpongeBob SquarePants during a vacation in San Felipe, Mexico where it may have been the only TV show that wasn’t dubbed into Spanish — which seems somewhat surprising, given that SpongeBob’s a cartoon. Then again, who could capture the one-of-a-kind vocals of television’s most famous talking sponge? Some things aren’t so easy to translate across cultures, especially this beloved animated creature who sounds so inexplicably endearing, so eternally quirky, so strangely adorable most of the time. Don’t tell that to actor Ethan Slater, however. As the title character in the splashy if apocalyptic Broadway spin-off SpongeBob SquarePants: The Musical, he’s channeling all that hyperbolic hopefulness and happiness with squishy steps and gargling giggles to boot. He is SpongeBob without even looking like SpongeBob. How is that even possible, you ask?

Well, Neptune and Nickelodeon be praised, director Tina Landau and set/costume designer David Zinn have forsaken a Disneyesque theme park approach that would’ve had Slater walking around the entire time in a yellow foam cube and opted for something infinitely more Seussian. These are the Waterworld cousins of Whoville’s Cindy Lou Who, not the subterranean relatives of Beauty and the Beast’s Lumiere. That means Patrick Star (Danny Skinner) doesn’t really resemble a five-armed starfish and Eugene Crabs (Brian Ray North) doesn’t look the least bit crustacean. Okay, okay, Squidward Q. Tentacles (Gavin Lee) does have four legs but they’re really more of a sight-gag than a simulation. Ultimately, the residents of Bikini Bottom, SpongeBob’s hometown, aren’t Julie Taymor people-puppets. They’re a crew of flashy kooks who have raided the costume shop of RuPaul’s Drag Race then snatched some tall wigs from a touring production of Hairspray. This is camp more than cute although — it’s a cute camp when you get right down to it.

The plot is similarly over the top: Bikini Bottom is set to explode in less than two days and everyone’s freaking out despite a potential life-saving plan devised by Squeaky Cheeks (Lilli Cooper), the town’s immigrant squirrel. Kyle Jarrow’s sly book makes no fishbones about its political allusions. The show’s villain — a double-talking aquatic organism named Sheldon Plankton (Wesley Taylor) — may be clad in green instead of orange but his motives are similarly profit and power and a wish to hypnotize the masses so they’ll do whatever he says. None of it’s especially edgy because so much of it’s good-natured. Any presidential digs or social commentary are intended to keep adults engaged more than they are to indoctrinate the kids.

Really, what holds it all together is Slater as SpongeBob. Exuding an irrational optimism with a touch of sexy swagger in his clownish strut, this guy is a total vaudevillian who can stretch his face into strange shapes, cross his eyes individually and in tandem, flip, split, contort, and hit a breakdown move as the situation demands. If Cirque du Soleil were exploring the possibility of crafting a one-man-show, this guy would definitely qualify for their short list. If you’re seated up close, you’ll notice he definitely breaks a sweat. But why shouldn’t he drip? He’s a sponge. And you’re going to want to give him a big squeeze at the end.

0 comments on “SpongeBob SquarePants: The Seussical”