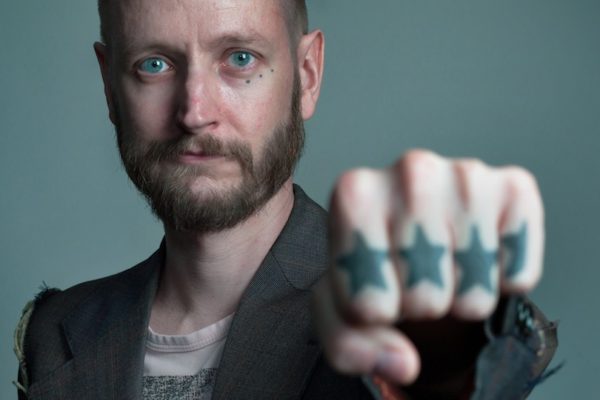 Vocalist and vibraphonist Kevin Kendrick definitely has eye-popping stories to tell. After all, he was kidnapped in Colombia during the late 1990s then kicked heroin in NYC in the mid-‘00s. So where does that leave him for the latest decade? Making some pretty delightful music with his band A Big Yes and a small no. Rather than dig into his dark past again, we asked him some questions about his current passions. Sure, some Sartre crept into the dialogue but even more so was an enthusiasm for life that’s downright contagious. And as Kendrick says himself, “Light needs darkness.” Who are we to argue with that?

Q: The title of your album Mise En Abyme refers to a kind of hall-of-mirrors effect. How would you say this idea plays out in the music?

A: The title track started because I was reading Jean-Paul Sartre’s Being and Nothingness where he uses “mise en abyme” — literally “placed into abyss” — to describe the fact that humans know they exist, and also know that they know they exist, but should not go any further down the rabbit hole. When you see yourself into infinity, which one is really you? I got a small face tattoo years ago, and the effect it has had on me is to make me conscious that the person I see when I look in the mirror isn’t me; it’s my opposite. Every time I see a picture of me I’m shocked to see that my face tattoo is on the opposite side of where I see it every morning. Which is me? Jazz vibraphonist? Or knuckle-tattooed indie-pop frontman? You can ask the same of this band and all the guys in it, and you hear it on this record. We were all in an instrumental band called Fat Mama almost 20 years ago that played Bitches Brew-era Miles stuff. We still have so many inside jokes that sometimes I think, is this just a mirror image of Fat Mama, face tattoo on the other side? Vocal where it was once instrumental?

The guys all have many different “reflections” peering back from the mirror as well. Jon Goldberger plays in an Indian wedding-music dance band called Red Baraat. He also plays in Jim Black’s Bagatelles quartet (written and arranged by John Zorn), and you can glimpse those two different “reflections” in the guitar solo on “We Talk Too Much” and the noise solo on “I’m Gonna Die One Time.” Erik Deutsch plays in Leftover Salmon. He also played with Shooter Jennings, Charlie Hunter, and puts out crazy outlaw-jazz records with serious “cats.” It was so fun to expose Erik Deutsch’s many “reflections”, from warm and fuzzy Erik on “Stranger Things” to jazz badass on “Photo Finish.” Jonti Siman has an acoustic trio with Jon called Surface to Air that’s, like, incredibly sexy tabla-driven acoustic lounge with a middle eastern bent. I’m lucky to have an electric bass player who can pick up an upright and swing his ass off like Jonti does on “Photo Finish.” And Joe Russo? He’s practically a religion on the jam band scene, but then he also plays in Big Yes and with Craig Finn from The Hold Steady (among many others) and comes from serious Jersey-rocker roots. And he really puts those on display on “Don’t Pull It Out” and “We Talk Too Much.” I personally put a lot of my hip-hop DJ background into “Enough is Enough.” When I listen to some of the things these guys come up with, I’m just stunned. Who ARE these people? That’s what I wonder. Who is looking back at them from their mirrors?

Q: What drew you to record your own version of “Amazing Grace”? And what is it about that song that keeps musicians coming back to it?

A: The lyrics. They are so powerful. The recognition of a higher power gives them an element of the sublime, in the literal usage of the word. As in to make you feel that you are bearing witness to something greater than yourself. To me, the higher power is the universe and how beautifully insignificant you are to it. I feel that there is a bit of darkness in that (light needs darkness as they say), so I began playing with doing it in a minor key and realized that the lyrics really resonated with me more that way. I never noticed how almost violent and scary they were until I sung them in a minor key. Since this was the first album I did where I really felt my heroin addiction was completely behind me, I consider it something of a funeral for the old me, and what’s a funeral without “Amazing Grace”?

Q: You’re a vocalist-vibraphonist, a fairly uncommon hyphenate, especially outside the world of jazz. That said, are there particular jazz vibraphonists you’re enamored of?

A: Oh my god I could go off here. Bobby Hutcherson, who passed just in 2016, swung so hard, played only the raddest notes, and played on so many amazing records. He was also a recovered junkie so I like to think we were kindred spirits. I recommend Blow Up with Herbie Hancock, doing Herbie’s music from the Antonioni film of the same name. Now, Gary Burton is an absolute beast. He redefined the instrument from two mallets and mostly melodic to four mallets and harmonic (chordal). Jon Goldberger and I have a band with Dave Dreiwitz from Ween and drummer Jeff Davis that does all his music from the ’70s called Scary Burton. His records from that era are achingly beautiful. I recommend Gary Burton & Keith Jarrett (doing Keith’s amazing rock-gospel tunes and featuring Bill Goodwin of Tom Waits’ Nighthawks at the Diner on drums for the rock snobs out there) and Dreams So Real (doing Carla Bley’s amazing music). I need to shout out Milt Jackson for being the hottest straight-ahead player, Steve Nelson (Dave Holland Quintet) for being the best vibraphonist who always gets slept on, Bryan Carrott for playing on those amazing Lounge Lizard’s records, Bill Weir (Groove Collective) for being able to play any style with finesse, Doug Walter for being a fantastic teacher, Mike Dillon (from Austin, Texas, now in New Orleans) for making vibraphone PUNK and reminding everyone that vibes can do a lot more than just swing, and Roy Ayers for making it SEXY.

Q: You actually can hear a jazz sensibility creep into the song “Photo Finish.” But if you were to cover a jazz standard, what might it be?

A: Yeah, I was going for a Dean Martin thing on that. Jazz geeks might notice that I give a nod in the opening line to another minor blues, Oliver Nelson’s “Stolen Moments.” In terms of a true Tin Pan Alley standard, it would be “You and the Night and the Music” by Arthur Schwartz and Howard Dietz. Bill Evans’ version on the album Interplay will swing you into bad health. My honorable mention would be “Softly, as in a Morning Sunrise” by Romberg and Hammerstein. That melody is haunting; almost self-aware. A trip-hop version would crush. Maybe I’ll do that…

Q: It’s been ten years since your debut LP Jesus That Looks Terrible on You. Listening to that album today, what song speaks to you most?

A: “I’m Always Manic (When I’m Around You)” still makes me stop and smile. It was the first lyrical song I ever wrote. Coming from a classical first, then weirdo-jazz background, that was a big moment for me. I always wanted to write lyrics. To finally finish a song, demo it, and go, “Oh my god…I actually love this” was a high that no drugs I ever did could quite compare to. I took a burned CD of it to the bar I worked and made them play it and was like yelling, “I MADE THIS!” It is so full of joy, because I had just gotten off heroin, Methadone, etc. for the first time in years after feeling like I’d NEVER get clean, and had just landed in New York. It was my chance to finally hit “reset.” I was in the honeymoon period still and loving it. I wasn’t as out of the woods as I thought, but I didn’t know it then!

Q: I’m assuming you’ll be touring to support the release of “Mise En Abyme.” Is there a city you’re particularly looking forward to playing in again?

A: Well, I’m psyched to play The Acoustic, April 17th in Bridgeport, Connecticut because I love that room and historic Bridgeport doesn’t get enough love, but I’m also psyched to get down to Philly because I have friends down there who moved there from Brooklyn, and it’s always fun to see them and listen to them try to convince me (and themselves) that they don’t miss Brooklyn. When you’re on tour you’re kind of forced to behave like you’re still 25, so it makes you feel young (and later tired and sore) again.

Photo Credit: Kevin Kendrick of A Big Yes and a small no courtesy of Calabro Music Media

P.S. Click here to pre-order your copy of A Big Yes and a small no’s Mise En Abyme.