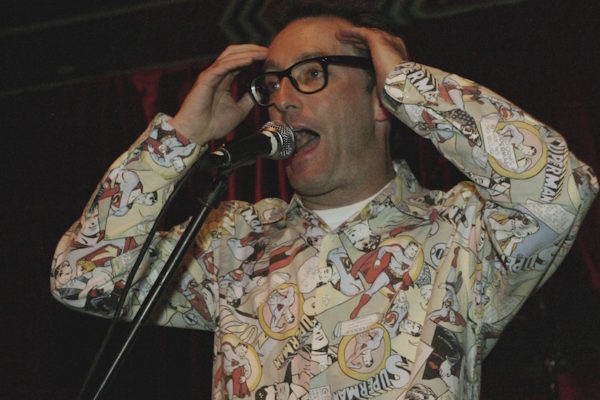 SpongeBob SquarePants is that truly unusual kids’ program that has improbably, defiantly and unquestionably transcended its genre to become an indisputable all-ages sensation. At its core, a large part of its success can be attributed to the fact that, since its debut in 1999, the show and its offshoots have often made pop music a central element. Its spin-off movie and Broadway show have recruited a wide array of talent — from alt-rock’s Ween to country’s Lady Antebellum to genre-crossing icon Cyndi Lauper; an eclectic variety of music to cross frequencies and come out of Bikini Bottom.

At what is considered the peak of the series’ success in 2004, creator Stephen Hillenburg decided it was time to release a SpongeBob SquarePants movie. Having already established itself as a prominently musical show, this highly anticipated flick would be built around its music, which meant Hillenburg needed a strong soundtrack. Knowing this, he reached out to psychedelic rockers The Flaming Lips. After working out the song “SpongeBob & Patrick Confront The Psychic Wall of Energy,” that band’s frontman (Wayne Coyne) suggested bringing in Justin Timberlake for a duet  but Hillenburg quickly shot the suggestion down, proclaiming (according to Fader), “I don’t want any of those sort of commercial weirdos on there.” What he envisioned — and received — were songs written by The Flaming Lips, Motorhead, The Shins, Wilco, and Avril Lavigne. (And eventually a movie sequel.)

Following the critical acclaim of the first movie and its soundtrack came The Yellow Album, its artwork mirroring the style — if not the hue — of The Beatles’ White Album. Released a year later, this compilation gathered together 23 original songs featured on the show since its debut, including “Underwater Sun” (performed by The Cramps’ Lux Interior) and Bubble-Bowl Halftime staple “Sweet Victory” (performed by David Glen Eisley.) Soon after, Tom Kenny — a.k.a. the voice of SpongeBob — thought up a project of his own: “There’s SpongeBob everything… but nobody’s ever done an all-original SpongeBob music album.” What resulted was the 2006 album The Best Day Ever with tracks by Kenny and producer Andy Paley and a talented lineup that shifted from alternative to classic via The Beach Boys, the Ramones, and the Wrecking Crew amongst others. Although masquerading as a kids’ music album, you’ll still find Tommy Ramone on drums, Brian Wilson doing some backup vocals, and the members of NRBQ fleshing out the sound. (NRBQ drummer Tommy Ardolino actually introduced Kenny to Paley years before, while Kenny, a hardcore NRBQ fan, helped orchestrate a lesser-known 17-minute SpongeBob audio episode that’s a total NRBQ tribute.)

As of late, the SpongeBob SquarePants franchise has taken its brand and some bands to the stage with SpongeBob SquarePants: The Musical. Although the show originally premiered in Chicago in 2016, it’s currently on Broadway and, akin to the 2004 movie, features a wide array of talent from Plain White T’s to John Legend to Panic! At The Disco and Aerosmith’s Steven Tyler and Joe Perry. There’s even a cover of an obscure B-side by the late David Bowie who was no stranger to SpongeBob: he appeared in the 2007 musical special Atlantis Squarepantis, joining the likes of fellow musicians Davy Jones of The Monkees and KISS’s Gene Simmons to have guest-voiced for the series.

Through the years, the show has successfully reinvented itself to stay fresh but has always maintained its unwavering pop music prowess at the heart of its identity.

PS. Outside of Bikini Bottom,  David Bowie’s “Station to Station” was a game-changer.  And here are some Aerosmith songs that should’ve been singles.