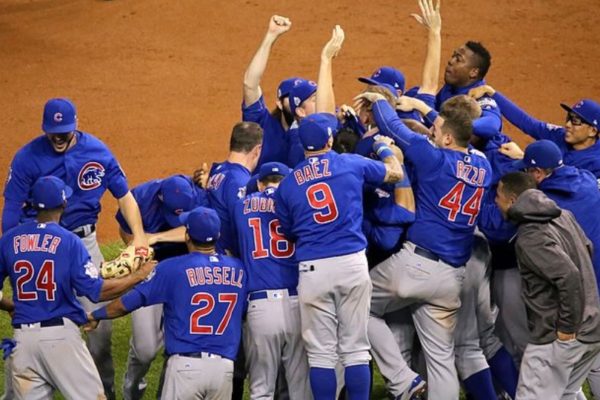 The Chicago Cubs recently won the World Series for the first time since before World War I. That’s right: The first World War, not the second one. Which leads us to believe that now is a great time to reflect on some equally breathtaking sports moments that transcended their game and their players to become a part of our larger shared history. These are the kind of moments that are so impactful that if you saw them, you probably not only vividly remember the event itself, but also where you were when you watched it happen. And if were actually a participant, you can now rest on this laurel for the rest of your life.

Ending a 108-year World Series drought by coming back from a 3-1 deficit is no easy accomplishment and a big part of that success here must be attributed to Aroldis Chapman, the pitcher who, after giving up a three-run homer in the eighth inning of Game 7, got back on the mound and rallied back after a rain delay to lead the team to victory. Goodbye Curse! Hello pandemonium in the streets of Chicago! Takeaway: You can always turn it around.

This is what you call a Wheaties cereal box moment: Brandi Chastain’s penalty kick defeats China and earns the U.S. Women’s soccer team the World Cup. What makes this moment so unforgettable is that it was like an exclamation point to one season’s series of successes that let young girls know the possibility of future pro soccer careers might await them. This was a team that had grown up together: Some had played together for17 years! Takeaway: America’s female athletes have come of age in the world’s most popular sport.

Who will ever forget when Magic Johnson announced that he was HIV+ and was retiring from basketball? At the time, it felt like the sports world’s equivalent of the Space Shuttle Challenger explosion. Yet this story has a happy ending as Magic fulfilled the wishes of fans who voted him in by coming out of retirement for that season’s All-Star Game where he lit up the court with his trademark smile, executed his no-look passes and even made a Larry Birdesque three-pointer at the end of the game. To his great credit, this remarkable athlete became an unofficial ambassador for people with HIV and helped remove the stigma that the virus had at the time. Takeaway: You can come back in a blaze of glory.

American tennis fans in the ‘70s and ‘80s were all obsessed with Jimmy Connors. You either loved him or loved to hate him. His legacy was set by 1991, his legend a thing of the past. Or so we thought! Who can forget the surprise when the 39-year-old resurfaced with an 11-day run of fist-pumping classic serves and returns propelling him to the U.S. Open’s quarter-finals? With each victory, he seemed to turn back the hands of time. The fact that he didn’t go all the way is unimportant compared to his defeat of Aaron Krickstein, 15 years his junior, in an epic 5-set match. Takeaway: Age is just a number.

Millennials know him as a likeable former boxing champ with cameos in the Hangover movies, but in the late ‘80s, teenage Tyson burst into the squared ring with literally unbeatable force. He was just what the sport needed: a heavyweight champ from the mean streets of Brooklyn, with enough swagger and prowess to get fans to purchase Pay Per View and Nintendo cartridges. No one thought he was invincible but nobody thought relative unknown “Buster” Douglas would be the one to take him down. Yet one night in Tokyo, Douglas fought the fight of his life and knocked Tyson, his mouth guard and his air of invincibility, out. Takeaway: All reigns must come to an end.

“Do you believe in Miracles?” was the rhetorical question asked by sportscaster Al Michaels at the end of the biggest upset in Olympic history. Coach Herb Brooks had pulled together a group of U.S. college-age amateurs to compete against the Soviet squad of legendary veterans. The Russians had won Gold the four previous Olympics; the Americans, never. Post-Watergate, Cold War-entrenched, and midway through the Iran hostage crisis, the U.S. needed an ego boost. This was it. Takeaway: Never underestimate the underdog.

Tennis legend Billie Jean King has fought her whole life for women’s equality (including equal pay on the tennis courts) but even she admits that at her funeral people will probably be talking about her match with Bobby Riggs, the one-time number one tennis player-turned chauvinist carnival barker who after “proving” men are better than women by beating number one ranked Margaret Court, made the mistake of taking on King, who ran Riggs’ legs all over the court. The match was a spectacle befitting something out of WrestleMania, held at the Astrodome, in front of the largest-crowd-ever for a tennis match. Additionally, 90 million people tuned in worldwide to see King make Riggs eat crow. Takeaway: We’re not totally defined by our gender.

In one corner, you had Ali, the flamboyant fighter returning from a three-year exile after refusing the draft during Vietnam. In the other corner, you had Joe Frazier, a stoic bruiser subjected to numerous taunts via Ali’s hype for the match. The two boxers battered each other for 15 rounds at Madison Square Garden and even though Ali lost by way of unanimous decision, he showed the courage and the perseverance that would become his trademarks over the remainder of his career in the ring. Takeaway: You can lose and still win.

There’s nothing worse than leaving the room then returning to discover you’ve missed a major play. November ‘68 saw that feeling multiplied by 100. How so? Well, during a Jets-Raiders game, the unthinkable happened. With the Jets leading 32-29 and about a minute left, NBC switched to previously scheduled programming. Namely, Heidi. So while the Raiders recovered a fumble then scored to win the game, no one on the East Coast saw it. Angry calls flooded the network after the final score was shown on-screen during the movie. From then on, football games would always be shown until their conclusion. Takeaway: Live sports rule over all other forms of entertainment.

The Nazis planned the Olympic Games to be a showcase for Aryan superiority. What they hadn’t planned on was Jesse Owens. Less than a decade after Martin Luther King Jr. was born, Owens was not only dealing with institutionalized discrimination at home but was called upon to represent American ideals in the face of Adolf Hitler’s Third Reich. Owen’s four gold medals (100-meter dash, 200-meter dash, the long jump and the 400-meter relay) made him an American hero who crossed all cultural borders. His victoriously raised fist on the podium eventually became a de facto symbol of Black Power. Takeaway: Greatness is colorblind.

1 comment on “No Passing Fancy: 10 Transcendent Moments in Sports”