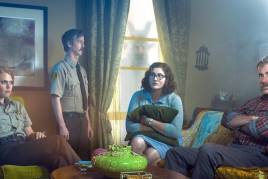 With Portlandia, Documentary Now!, and the soon-to-depart Comedy Bang! Bang!, IFC has shown no trouble combining comedy with eccentricity in its original programming. Given it’s still Halloween season, Stan Against Evil won’t have any issue fitting in with its bizarre brethren. But while other series on the network tackle sketch comedy, documentary, and talk shows with their own weird bent, this one takes on the horror genre with bloody, fun results.

Amidst the pie-baking contests and church auctions in quiet-seeming Willard’s Mill, New Hampshire, there are goat demons, succubae, and all matter of evil things. In the 17th century, the small town was the site for 172 people being burned as witches, and now they want their revenge. For centuries, local sheriffs have died violently in repayment for the constable’s role in their deaths. In the present day, Sheriff Stanley Miller (John C. McGinley) has mysteriously survived long enough to be forced to resign after he attacks an evil-looking woman at his wife’s funeral. The new sheriff is Evie Barret (Janet Varney), and she joins forces with her predecessor as creatures target the town’s citizens, often looking like normal people when they first appear. They’re helped by Stanley’s adorable adult daughter Denise (Deborah Baker Jr.) and inept Deputy Leon Drinkwater (Nate Mooney) as they fight one demon per episode in traditional monster-of-the-week format.

The always-funny McGinley is in full-on grumpy, macho mode. It’s at once different enough from his previous role as fast-talking insult master Dr. Cox on Scrubs to not feel like a retread and similar enough to remind audiences why they love him. Varney pulls double duty here and on You’re the Worst, and she plays the straight woman well, though she gets a chance to have fun, too. The show’s most pleasant surprise is Baker’s Denise, whose sunny oddness is a great contrast to her father’s gruff demeanor.

Most of the show’s budget appears to go toward paying for talent like McGinley and Varney–and the rest toward copious amounts of fake blood and viscera. It’s charming in its low-fi approach to comedy-horror on TV, and for all its goofiness, it doesn’t hesitate to go for the gore. Demons vomit black goo, blood splatters across our heroes’ faces, and a creepy old woman has her hands degloved. (I recommend not doing a Google image search if you’re unfamiliar with the term. Trust me.)

Stan Against Evil was created by stand-up comedian/writer/actor Dana Gould, who also makes occasional appearances as the small town’s cemetery caretaker. It’s a show that gets better as it goes along, though I’m still debating whether the series actually improves with each episode or if each half-hour simply brought me more onto its wacky wavelength. Willard’s Mill is an odd town, but you may start to feel like a local if you binge enough episodes. Just don’t blame me–or Gould–if you start looking suspiciously at your neighbors after a few in a row.

Comparisons to Ash vs Evil Dead are inevitable and frankly deserved. Stan Against Evil doesn’t appear to be directly aping the Starz show, but both share the same silly tone and love of slapstick, blood, and guts. It’s gory enough that it won’t likely win over any non-horror fans, but it won’t be too much for anyone who loves The Walking Dead. After that show’s controversial season premiere, Stan Against Evil feels almost quaint in its approach to the genre, making it serve as a fine palate cleanser for viewers. Though with all the gore, I probably wouldn’t recommend eating while you watch.