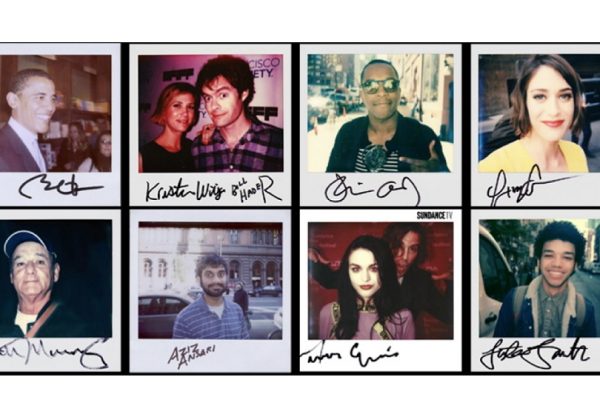 How do you turn your passion into a career? You’d do well to ask Portroids shutterbug and mastermind Rick DeMint whose instant photographs have gone from being a hobby to featured on such web heavyweights as BuzzFeed, Mashable, and Slate. He even covered the Sundance Film Festival for its namesake network SundanceTV. Additionally, he’s had an 11-week exhibition of his work showcased at a gallery in New York’s tony SoHo neighborhood. How did all this happen? Read on to find out.

Q: How and when did Portroids.com come about?

A: Thirteen years ago in October 2003, I started shooting Polaroid portraits of people I knew and celebrities whose work I enjoyed. I’d also have the subjects sign their name on the bottom of the photo, thus creating instant memorabilia. It started mostly just as a fun way to document my life and interests. After a few months, as my collection grew, I realized that people other than my friends and family might be interested in seeing the shots. I combined the words “portraits” and “Polaroids” into “portroids” and built the site around that. One of my goals, passions, has always been to expand by association, to grow my own experience, and that of others, by linking current interests to potential future ones. Quick example: in 2005, I attended a comedy festival to see Eddie Izzard, caught a Patton Oswalt show for the first time, checked out his website, got introduced to another comedy site AST where a relatively-unknown Aziz Ansari was posting comedy videos he was making, so when I ran into him on the street in early 2006 I knew him and took a portroid. Similarly, if someone is directed to my website from an internet search for Aziz, perhaps they will also see a shot of some new, up-and-coming comedian/writer/musician/etc. and check out their work and expand their own world.

A: I sort of stopped tracking popular pages on my site, as it was driving me crazy trying to figure out who and why someone was getting thousands more hits than another person that I found comparable. I do also try to post up my photos across the various social media platforms and I find it so fascinating how a collage of the cast members of Parks and Recreation I posted on Tumblr, after sitting with a hundred likes, suddenly jumps up tens of thousands of likes/reposts within a couple days. Once a niche fan group gets hold of something that touches their base, it’s amazing how quickly it spreads. That said, one of my most consistently popular photos on portroids.com is the one I shot of Barack Obama in 2006 (ten years ago!). A lot of people seem to like that guy.

[amazon template=right aligned image&asin=B015JIAD7C]Q: If you could share one photo from Portroids what might that be and why?

A: It would have to be my portroid of Barack Obama. I’ve taken a ton of better photos, but this is the one that always comes up when my site/project is discussed [Kanye West blogged about it in 2009 (note: I’ve never met Kanye himself)]. The story behind it is also one of success through perseverance. Simply, there was a book signing for The Audacity of Hope and the venue had thousands of people waiting. I was toward the end of the line and 500 or so of us were told there was no way we would make it in. Also, no photos allowed. I waited anyway. So many people gave up that I kept inching forward in the line, and ultimately was one of the last couple people to make it in. Because I was at the end, I was also still there a few minutes later as he was leaving the building, so I shot my Polaroid as he was passing by, and then he came back and signed it for me when I asked.

Q: What’s coming up of particular interest for you as Mr. Portroids?

A: I just finished a huge project on October 19, 2016 called “The Broadway Project,” where I shifted my focus from celebrity photographs and instead took portroids of the people of New York. With the help of Sarah Roberts (from WIP Artists), a team of people and I walked 13.6 miles from the very top of Manhattan at 220th all the way down Broadway to Battery Park, taking portroids of the people we met along the way. It was an incredible experience and so much fun to interact with the city in this way. And, of course, it wouldn’t be portroids without randomly running into a celebrity or two along the journey (Justice Smith of Netflix’s The Get Down agreed to be part of the project when we ran across him). Another big event coming up is the annual charity fundraiser Never Not Funnys Pardcast-a-thon. I’ve been lucky enough to participate each year by shooting portroids backstage of all the celebrity guests and auctioning them off to benefit Smile Train. The upcoming marathon comedy podcast is going to be 24 hours (historically it has been 12 hours) and takes place in LA in early March 2017.

A: People are generally pretty happy or enthusiastic to have their portroid taken, especially when they see the Polaroid camera (novelty, nostalgia, whimsy, and a bit of magic all in one), but the one recent response that thrilled and touched me the most was from Leslie Odom, Jr.. He had just won the Tony Award a couple days prior for his portrayal of Aaron Burr in Hamilton and was doing press for his new album when I ran into him and took a portroid of him holding his Tony (he was just departing a morning show appearance, thus the presence of the award). I posted the photo online (like always), tagged him in it, and that was it. A month or so later, right before his final performance in Hamilton, he posted my portroid of him on his Instagram as a representation of the kindness and love he has found being part of that show. I ran into him again a month later, introduced myself, and thanked him for posting the shot. He told me he loves that photo so much and now we’re best friends (just kidding about the best friend part, but still… Awesome!).