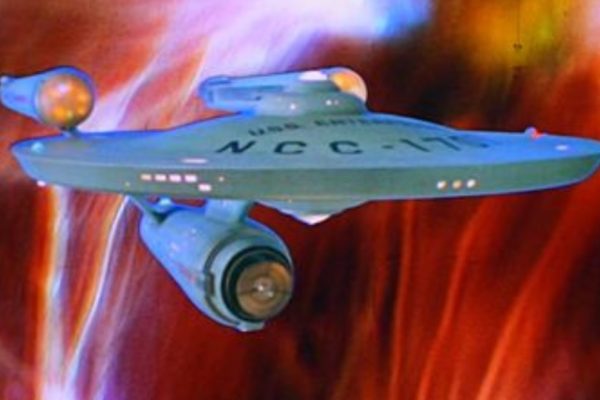 So many articles have been written about the original Star Trek series (1966-1969) — from the challenges of getting the series off the ground to Gene Roddenberry’s fervent push to make the cast multicultural to the storylines reflecting the political realities of the 1960s and today. Even the show’s background music and theme song have become embedded in our pop-cultural consciousness. But there’s one musical facet too often overlooked: the original lyric-driven tunes featured on the show. It didn’t happen frequently and likely only devoted Trekkers will recall them, but these songs from the show’s initial three-year run are definitely worth a re-listen.

1. “Oh Charlie”
Our first tune is from the first-season episode “Charlie-X” (1966) in which the crew encounters a young man (Robert Walker Jr.) whose strange powers get out of control. With Uhura on vocals (Nichelle Nichols, who’d previously performed for Duke Ellington!) and Spock on Vulcan Harp, this song begins as a gentle teasing of Spock’s devilish but attractive features then shifts its attention to Charlie, the aforementioned young man. Problem is, Charlie is a sensitive “teen” who uses his power to mute Uhura’s voice and Spock’s lute as a way to show his displeasure. Not a crowd-pleaser.

2. “Beyond Antares”
In “Conscience of the King,” Uhura takes up the Vulcan Harp for a rendition of “Beyond Antares” to satisfy the request of Lieutenant Riley (Bruce Hyde) via intercom. Working alone in engineering, he’s desperate for “…a love song, something to reassure me I’m not the only living thing left in the universe.” Naturally, she obliges, leaving Riley so entranced that he doesn’t notice someone’s poisoned his military-issued cup-o-milk. The song gets an unexpected encore in the later episode “The Changeling.” This time around, the space probe NOMAD decides that Uhura singing the song is illogical and promptly wipes her mind clean. That’s two people seriously injured because of this song. Finally, the tune also appears as a track on the all-but-forgotten Leonard Nimoy Presents Mr. Spock’s Music from Outer Space.

3. “The Way to Eden”
In “The Way to Eden” episode of Season 3, the bare-chested space-hippie Tongo (Charles Napier) delivers a folksy tune about how trouble can be avoided if a man tells another man to “be my friend.” When he switches his space guitar to church organ mode, his sidekick Mavig (composer Deborah Downey) joins in with the sentiment “let’s say goodbye or let’s say brother.” Hearing the impromptu concert, crew members file into the Enterprise’s rec room until Tongo ends the song with “Let’s get together and have some fun / I don’t know how to do it but it’s got to be done!”

4. Spock and Mavig’s Jam Session
During this same “Eden” episode, Spock and Mavig jam for an E-major Hendrix-chord instrumental…in the rec room again! Spock’s back on Vulcan Harp; Mavig’s playing something that looks like the wire-rims from a 1960s MG midget. The duo pantomimes quite well as the music broadcasts throughout the ship, including the bridge where an exasperated Scotty carps about these young troublemakers making noise. In the song’s defense, the melody has a nice changeup while following a very basic blues progression with some organ backing. Little does the Starfleet know that the hippies (and the unknowing Spock) are using the music to subdue key staff while planning to hijack the ship to their desired destination: Planet Eden.

5. Heading Out to Eden, Yeah Brother
The final song from “The Way to Eden” episode features Napier crooning a pleasant ballad about his projected plans on Eden: “eating all the fruit and throwing away the rind.” Outside of the promotion of littering, this song proves a pleasant reprise with Napier’s highly reverbed voice and simple acoustic instrumentals evoking calm despite the astro-hippies space mutiny that’s in progress. The trio of songs in “The Way to Eden” descend from upbeat to down-tempo which is your melodic clue as to where these spaceniks are headed. Eden is not all it’s cracked up to be.

PS. For all you Trekkies out there, check out our posts A Season of Change for “Star Trek: The Next Generation,” “For the Love of Spock”: A Salute to Leonard Nimoy, and The Shatner Album That Is Actually Really Good.