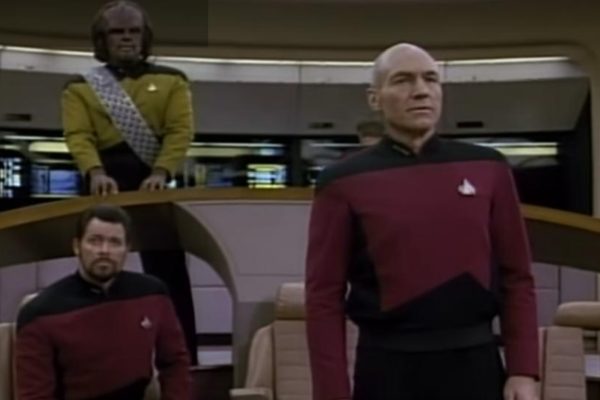 Later this year Star Trek: Discovery will debut on CBS All Access as the first new Star Trek TV series in 15 years. To some extent, it’s been overshadowed by a recently-settled lawsuit surrounding a fan-made Star Trek film, and relatively little information about it has been announced so far. One of the few concrete facts is that its premiere coincides with the 30th anniversary of the program that truly cemented Star Trek‘s place as a force in popular culture, Star Trek: The Next Generation. With a couple decades of hindsight, it’s easy to forget that there was a time when there was genuine doubt whether Star Trek: The Next Generation (“TNG” hereafter) would be remotely successful, let alone become a TV classic.

Even without the legendary behind-the-scenes drama, the people working to launch the show in 1987 had a daunting task: The need to demonstrate to fans that the show was “still Star Trek” but also different enough to encourage those same Trekkies to watch new episodes instead of just revisiting the original series (“TOS”). Like the pilot episodes for all the other non-Kirk Star Trek series to date, “Encounter at Farpoint” is a solid introduction to the show, but the rest of that initial season is highly uneven. Some of this was certainly driven by the aforementioned off-screen strife that David Gerrold and other TOS alumni who were involved in TNG‘s early days have detailed over the years. At the same time, an identity crisis on-screen seems to have been just as much a factor.

The legacy of TOS has hung over every live-action movie or TV series that followed. TNG had the unique challenge of wrestling with that legacy while the original was still a going concern (at least in the movies). By all accounts, Gene Roddenberry was adamant about not wanting the new series to copy the original, but as a practical matter, the production team often found themselves in limbo between embracing the heritage and the new path Roddenberry wanted.

When established elements of Star Trek do appear in first season episodes, they generally feel stuck between their familiar incarnations and the ones they’d evolve into over the next decade-and-a-half. Along with specific alien races like the Romulans, this mindset also comes through in its narrative approaches. In TNG‘s second episode “The Naked Now” using the familiar scenario of the TOS story “The Naked Time” proves a useful method to depict the ways in which the new crew is both similar to and unlike their predecessors. In some ways, though, the more subtle callback found in the episode “Too Short of Season” is the most substantial of all that season’s stories.

Despite input from Star Trek veteran D.C. Fontana, “Too Short a Season” is by no means a great episode. The script isn’t just talky but also quite stagey and, despite the regular cast being solid, the supporting characters lack dimension, especially the key role of Admiral Mark Jameson. The part of a good man whose efforts to atone for a tragedy that he helped cause lead to further tragic events would have been perfect for one of Patrick Stewart’s fellow actors from I, Claudius like Derek Jacobi or actor John Hurt. Instead, Jameson is played by journeyman TV actor Clayton Rohner, who approaches the character with enthusiasm but is ultimately unable to elevate the material.

That’s unfortunate because at the heart of the episode are the underlying values of Star Trek itself, as embodied by the Prime Directive. The Prime Directive, as transcribed in the first edition of The Star Fleet Technical Manual, reads in part:

Throughout the history of Star Trek, those words have been used as a guiding principle, even if characters were often defined by acting in opposition to it. Characters are also defined on occasion by skirting the directive’s intent, bending the rule but not quite breaking it. As “Too Short a Season” unfolds, we learn that the aging Admiral Jameson is one of these people, having resolved a diplomatic crisis by supplying weapons to both opposing factions on a planet 45 years earlier. This echoes the choice made by Captain Kirk in the TOS episode “A Private Little War”, where he provided one tribe on that week’s planet with guns to match what the other was receiving from the Klingons. Whether this is a deliberate echo or coincidental, it still offers a point of comparison.

The key difference between the two situations is that only one of the officers involved suffers as a result of their decision. Where Kirk was probably given a commendation for original thinking and allowed to let the events fade into memory, Jameson’s past decision and the knowledge that it led to decades of war clearly weigh on him, leading to further mistakes in the present. Even if its depiction on-screen isn’t as nuanced as it could be, the distinction still speaks to the ethical underpinnings of TNG in relation to its predecessor — to the vision of the future it wants to portray and by extension the kind of Star Trek it wants to become.

That’s not to say that past actions never had future repercussions in the Kirk era, as anyone who’s watched the movie The Wrath of Khan can appreciate. As a rule, though, the need to hit the reset button on network TV tended to limit consequential outcomes in TOS and encourage what a later episode of TNG would refer to as “cowboy diplomacy.” In contrast, the later series — not to mention its successors — would be a show where one day’s choices could easily ripple across the years and across the galaxy, but “Too Short a Season” shows that it wasn’t there yet either in concept or execution.

Midway through its second season, TNG would emerge as the show of our collective memory. Much of this is certainly due to the main characters fully adopting their iconic roles and personalities, which is also an on-screen reflection of a stabilization of both personnel and viewpoint behind-the-scenes. The turning point is “The Measure of a Man,” which explores the question of whether the android Commander Data could be considered a sentient being or a piece of Starfleet property. Every Star Trek series has been driven at least to some degree by questions of conscience, and “The Measure of a Man” shows the production team having found their way to translating such questions into an involving drama. The show’s first year of episodes may have been just tentative steps on that path but they are important ones nonetheless.

PS. Captain Kirk fans may also enjoy our posts The Shatner Album That Is Actually Really Good and “The Twilight Zone” Can Still Surprise You. Plus, check out our post on the trailblazing women of sci-fi here.

0 comments on “A Season of Change for “Star Trek: The Next Generation””