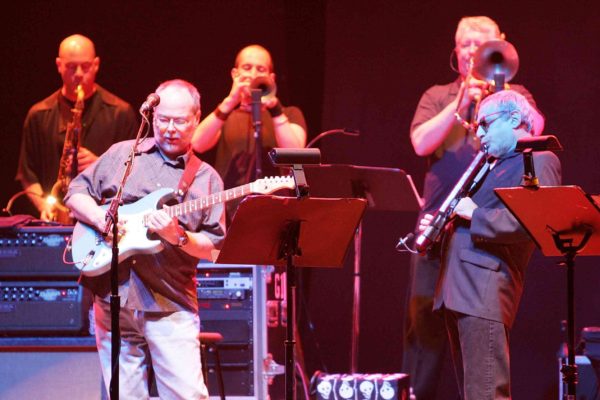 Editor’s note:  This was the first of an occasional series, from a few years back, where we “get under the hood” of some great records to see what makes them run so well.  It seemed a good time to re-visit it. Scott Freiman is our uniquely qualified guide, having built a worldwide following doing the same for Beatle albums.

Steely Dan is known for jazz-influenced arrangements, quirky lyrics, and pristine production.  Even non-fans recognize the brilliance of their 1977 album, Aja. For many music lovers, it’s their first choice for a late-night listen accompanied by iced Manhattans. Audiophiles use it to audition high-end stereo speakers. Jazz purists discuss its intricacies with classic rock veterans.

Donald Fagen and Walter Becker had formed Steely Dan as a band in the early seventies, serving as the group’s principal songwriters. They combined their love of rhythm and blues with their deep appreciation of jazz. They weren’t a rock band with horns or a jazz fusion band. Steely Dan was something different and unique — a rock band that used jazz harmonies.

By the time of Aja, Fagen and Becker were the only permanent band members (although original guitarist Denny Dias often appeared as a guest). They supplemented their instruments with the best session players in New York and Los Angeles. Their jazz-rock sound, with hardly a traditional major or minor chord in sight, was recorded with the utmost care thanks to the work of producer Gary Katz and engineer Roger Nichols.

Although Aja generated three singles – “Peg,” “Deacon Blues,” and “Josie” — many consider the title track one of the greatest songs of Steely Dan’s long career. Clocking in at eight minutes, “Aja” was the longest song the Dan recorded, and the most intricate. Its sophisticated structure makes it more like a suite than a single song. In fact, Becker and Fagen created it by combining several of their unfinished songs. In addition to Becker’s guitar and Fagen’s keyboards, the song featured a who’s who of great jazz musicians — Steve Gadd on drums, Wayne Shorter on sax, Larry Carlton on guitar, and Joe Sample on keys. The song also featured a guest appearance by the Eagles’ Timothy B. Schmit on background vocals.

There are Web sites devoted to interpreting Steely Dan’s lyrics, and “Aja” is no exception. According to Fagen, it was based on a Korean woman named Aja, although he also said that it’s about the “tranquility that can come of a quiet relationship with a beautiful woman.” But, you don’t need to understand the lyrics to come along for this exotic journey.

We begin with a four bar introduction – Michael Omartian‘s jazz piano with some light rides on the cymbals. Electric piano and guitar duet across the stereo spectrum. Fagen sings a three line verse about the people “up on the hill” who “don’t stare” because “they just don’t care” (0:17).  Are they the people who don’t approve of the singer’s relationship/infatuation with Aja? Or are they too caught up in their own lives to even notice her? Whoever they are, Becker/Fagen insert a few instrumental bars (including some marimba from percussionist Victor Feldman) to separate them from the singer (0:26). Already, the structure of the song is unlike any other song by Steely Dan — or any other group for that matter. We’re drawn into the mystery.

The dispassionate people of the verse are offset by the chorus’ “Chinese music in the banyan trees” (0:38). Yet, there’s really nothing Eastern about the percussion, which provides a Latin-tinged rhythm. Stacked vocals over jazz cluster chords accompany the first mention of “Aja.” On the word “you”, the song seems to suspend in time.

A brief electric piano arpeggio (1:07) returns us to another instrumental interlude and a second verse. Again, the arrangement contrasts the “hill people” of the verse with the heroine of the chorus. “Throw out the hardware,” sings Fagen. “Let’s do it right.” Things with Aja are definitely heating up!

We now enter an extended instrumental section that is like a song unto itself with intros, verses, and solo sections. It begins with an eight-bar introduction and two “verses” featuring a melody played by the marimba (2:16). The rhythm is driven by the percussion and not the drums. It feels as if we are visiting a tropical island. About halfway through the section (3:08), a Denny Dias guitar solo makes us lose all sense of rhythm. We don’t know where we are in the song or what will happen next. Just when we’ve lost our place, the marimba section of the instrumental returns with Dias soloing over top (3:30). Is Aja Chinese, Latin, or Hawaiian? And why is Fagen blowing a police whistle? Before we have time to ponder these questions, the “guitar out of time” section returns (4:13).

One might expect the verse to return at this point, but the Dan have other plans. In place of the verse, we get a great eight bar drums/saxophone solo courtesy of Gadd and Shorter (4:42). They solo while the rest of the band plays a single syncopated chord. Another interlude (4:58) where the solo appears to be winding down. But, Shorter and Gadd aren’t finished yet. They perform a second eight bar solo (5:14) followed by another interlude.

Finally, the tranquil mood of the introduction returns (5:48). It brings us back to a familiar place. We get a final verse about the people on the hill. This time Fagen sings of “angular banjos” (Is he comparing Aja to a banjo?  And why is it “angular?”).  The song ends with a long fade out (6:57), featuring a spectacular 28+ bar drum solo by Gadd over repeated chords by the rest of the band punctuated by Fagen’s synthesizer. According to Gadd, he nailed the solo on only the second take.

“Aja” is a masterpiece that sucks you into its magical world. Each musician’s performance is perfect for the song with not a single note out of place. In fact, jazz critics routinely rate both Gadd’s and Shorter’s playing on this song as highlights of their respective careers. The complex song structure takes us on a journey much like the singer’s journey from the land of “the hill” to the exotic world of Aja. “Aja” is the high point of an album filled with high points, an album that is itself a high point of Steely Dan’s career.