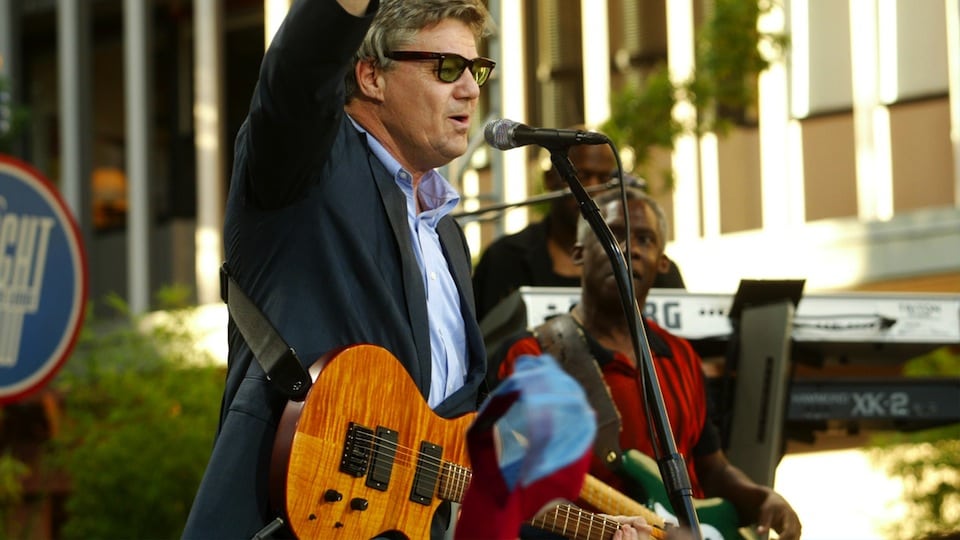 Steve Miller Band has been winding its way across the U.S. and Canada on another of their sprawling tours, this one the aptly titled “Underway.” Along that trek, they’ve been entertaining fans with a show that has remained mostly unchanged for more than two decades.

We’ll breeze through the history here: Steve Miller, born 1943 in Milwaukee. Jazz-mad parents. Les Paul a family friend. Moved to Texas. Started forming bands. Met Boz Scaggs. Back to Wisconsin for college. Left school with just a handful of hours left to make music. Found the Chicago blues scene. A stay in New York. Back to school. Still didn’t like it. Went to San Francisco. Fell in love with music all over again after seeing Jefferson Airplane.

To think that Steve Miller Band has been on stage for 50 years now is an actual shock to many a classic rock fan. When you think longevity, you instantly think of the Stones – or whatever version of The Who is out there nowadays – but not Steve Miller. The concept for many is that of a mid-70s rock-to-pop crossover act that still pours out the speakers of FM radio. And while it’s true that the last big hit came with 1982’s “Abracadabra,” that hasn’t stopped the man from leading his band cross-country to full houses for nearly 35 years since.

I recently had the pleasure of seeing Steve Miller Band at Ravinia Festival. The place was packed from gate to gate following a day of gorgeous weather. Chicago scene stalwart and harmonica aficionado Charlie Musselwhite opened and later joined Miller on stage for a set of blues standards before the pair announced they’d decided to begin work on a project featuring a slew of names familiar to the Chicago blues landscape.

Just a pair of songs into the show the crowd had its first interaction with the man behind the sunglasses. But let’s sidebar here for a moment, if we can (we’ll come back, don’t worry).

Miller, for right or wrong, has achieved a bit of a reputation for being hard to work with. Musicians have been put off by his demeanor over the years, though it could be said that anyone working in any industry for five decades is going to rub a few the wrong way.

Just this past year, after The Black Keys inducted Miller into the Rock and Roll Hall of Fame, Dan Auerbach decided to air his frustrations: “The whole process was unpleasant for Pat (Carney) and me,” he said. “The most unpleasant part was being around him.” Miller reportedly had no idea who the pair were.

For his sake, Miller has very little flattering to say about the Hall of Fame itself. At one point during the Ravinia show, he lambasted the organization, saying it was filled with egos and void of a purpose. “It should be teaching people about music,” he said, not asking them to pay to see guitars and glitter-adorned costumes in display cases.

In interviews following the April 9 induction ceremony in New York, Miller didn’t hold back on the heads of the Cleveland-based museum: “The whole process feels like you’re dealing with a company that wants you to give them everything,” he told Billboard, “and they’re going to go make all this money and they’re going to do everything with it, and you have no input into it, no say about any of it, take it or leave it. Probably what the general public thinks and what it really is are two different things.”

This is a guy who is 72-years-old, mind. There are very few cares he has left to give, and hearing that The Black Keys found him a bit sour at an event he didn’t particularly crave to be at is not shocking, especially given Miller had no input on the matter in the first place. “I wanted to ask Elton John to induct me,” he said, “because Elton knows my music and loves my music and we’re friends, and I thought he would probably have a good historical perspective. “But they said, ‘No, the Black Keys are going to do it,’ and I said, ‘well, OK, and they said ‘There’s no negotiation on any of it, that’s the way we do it, that’s the way we’ve always done it, that’s the way it’s gonna be. It’s all gonna be a surprise; you’re not gonna know what they’re gonna say, you’re not going to know anything about that.’”

Still, it’s not as though he didn’t have friends in attendance as well. Cheap Trick’s Rick Nielsen gave Miller a guitar to add to his collection – a sparkling metal-flake blue (including the fretboard) Strato-variety – at the induction ceremony, an event long overdue for both. Miller showed it off to a round of applause from the Chicago crowd.

But, here’s the thing about Miller’s supposed sometimes caustic attitude: fans don’t care if Steve Miller doesn’t care that much about modern rock music. Fans care about seeing Steve Miller Band play the 20 songs they paid to hear. And that’s exactly what this man still does – and goddammit, he does it well. From start to finish, not a note out of place, not a beat dropped, not a problem to be had. You paid for entertainment with an expectation of exactly what said entertainment would be, and you were entertained.

So let’s go back now to that first crowd interaction. After opening with “Jungle Love,” a track which can’t help but draw an audience directly into the show, the group segued to “Take the Money and Run.” Four young men in the front row – whose introduction to the band one would imagine came from a copy of Greatest Hits: 1974-78 they grabbed at Barnes & Noble one evening – took to dancing in the narrow aisle that separates the Ravinia stage from the venue’s classic wooden seats.

Now, Ravinia is not exactly a get up and dance kind of place, at least not in the bowl. Miller, recognizing the fact that four tall men dancing may be a bit of a distraction for the persons in the rows immediately behind them, took a moment out of his “Thank you”s and “It’s so great to be here”s to have some fun.

“It’s awesome that people want to get up and move around and enjoy the show,” he said, “but let’s all get comfortable and sit down and relax.” Some more gentle prodding failed to do the trick, so Miller went the more direct route. “I’m talking about you, you, you, and you. Sit down, please. The people behind you don’t want to see your backs.” Laughter erupted, and the boys might have thought they were part of a bit for just a second. “But really,” Miller said, assuring them they were not, “sit down. We’ll have time to dance later.” Compliance ensued.

Critics would say it was a sign of the abrasive nature of Miller, a man now out of touch with a scene he helped shape. This viewer would posit that it’s just the opposite case. Again, this is a guy who at 72 and 50 years into a career doesn’t particularly have to care, and the evidence was there to behold: Thousands upon thousands of people filled the Ravinia grounds that night to hear him play much the same set list he’s been working with since the mid-90s. To say Steve Miller doesn’t know his crowd would be disingenuous at best. This man owns his craft, and he certainly knows how to entertain the people there to see him.

To point, an Easter egg was uncovered a few pairs of ears at a time as Miller came out of an instrument change strumming his 6-string in a solemn minor key. Familiar lyrics slowly poured into the microphone, but many in the crowd had a hard time placing the words in what resembled a poetry reading for only a moment. I won’t ruin the punchline, but Mark Knopfler would’ve been proud, not just of the delivery but of the turn of face by one of rock’s most iconic pop slingers. “I’m just kidding,” Miller quipped to the listeners who’d picked up on the schtick. “We’ll play that one the right way later.”

The show quickly returned to form: “The Joker,” “Fly Like an Eagle,” “Serenade,” “Dance, Dance, Dance,” running right down the checklist. In an era where bands of decades gone crave relevance in an ever-shifting landscape, Miller achieves it by sticking to the script. Few would line up to see his band slot in a half-dozen of their 20 top-100 singles around a set of new tunes. Such ventures are the downfall of many a 70s rock group who wish to impart on crowds – those in attendance to see their idols play the tracks that made the soundtrack of their life – the sounds of a brand new album only few in attendance will ever bother to pick up.

There are around 20 dates still listed on Steve Miller Band’s 2016 tour, with more still being added, including one yet-to-be-listed on their website just a few blocks out my front door. And even though I just saw the act a few weeks ago, I’ll be there. I’ll be there because Steve Miller gets it. It’s entertainment, and it’s done right – and even if some of his peers don’t see it, the people in the seats still do.