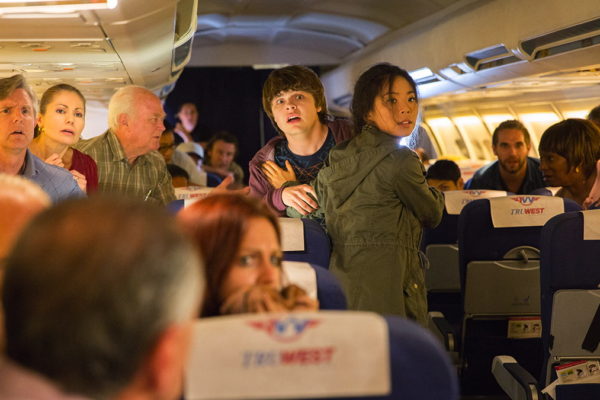 You haven’t missed an episode of either The Walking Dead or Fear the Walking Dead yet you’re still hungry for more? Then it’s about damned time you checked out the various Walking Dead web series with their increasingly sophisticated, self-contained stories that take place in the Dead universe and even expand on events and character arcs from the series.

Flight 462 (2016) – 16 webisodes
As a testament to the improving quality, this web series is nominated for two Emmy Awards. It also illustrates a key event in Fear the Walking Dead: The crash of a commercial airliner on the beach. Claustrophobic and nightmarish, Flight 462 opens with teenager Jake boarding a plane home to LA. “Do you think it’s this flu that’s been going around?” he wonders when a middle-aged passenger becomes ill and locks himself in the bathroom. The man’s vodka-chugging wife insists that it’s just “the reflux” but no one’s convinced…least of all Jake. Flight 462‘s handful of survivors proves a stark illustration of the group’s dynamics—who’s accepted the new ruthlessness and who’s still resisting, the strength of family bonds vs. strategic alliances. There’s also a sly callback to the zombie-guts strategy which Glenn and Rick use as a disgusting but effective strategy to survive.

The Oath (2013) – 3 webisodes
We meet Paul and Karina, who joined a group of survivors living in a tent city near Rockford, Georgia, not long after the dead rise. The camp’s oath was “one lives, all live.” But all didn’t. So these two find a car containing a map to aid stations, pretty much all closed until they roll up to Harrison Memorial Hospital, staffed solely by one Dr. Gale Macones. You may recall Rick woke up there in the very first episode. So now we see spray-painted “DON’T OPEN DEAD INSIDE” on the cafeteria doors. Not that we need to know that; it’s just a treat, buried in yet another story whose final scene hammers home the brutal truth that horrifying times breed horrifying acts.

Cold Storage (2012)  – 4 webisodes
This one starts out almost like a bit of no-frills theater: Just a couple of dudes on a rooftop, talking. Nice-guy Chase plans to meet up with his sister in Cynthiana (author Robert Kirkman’s hometown!), while boorish bro Harris is happy to hole up in the self-storage facility across the street, enjoying dead people’s fancy wine and freaky porn. This episode’s kicker is the contents of one particular storage locker happen to belong to Rick: a treasure trove of photos and mementos of himself, his wife Lori and his son Carl before the tidal wave of rotting flesh hit. But the scariest part is not what’s being held in cold storage but who.

Torn Apart (2011) – 6 webisodes
The first live-action Dead series is quite literally a back story, revealing the better days of “Bicycle Girl,” the legless half-zombie of Season One’s first episode. It opens on a child’s plaintive question — “Why do things have to die?”—  followed by the divorced mom-of-two Hannah’s gentle, no-nonsense reply: “That’s God’s plan, baby boy. Everything dies.” They’re talking about a goldfish, but by the time the line is echoed by Hannah’s daughter, it’s come to mean a whole lot more. The webisode’s final shot of Hannah’s reanimated corpse dragging itself across a neatly-trimmed lawn is a heartbreaker, as is Rick’s reaction. It’s still early enough in the apocalypse that he can imagine the woman she was and say “I’m sorry this happened to you” before pulling the trigger.

Days Gone Bye (2010) – 1 webisode
More a web short, than a web series, this black-and-white bit of animation covers Rick’s shooting, his subsequent emergence from a coma, and his discovery that the world has undergone some dramatic changes while he was sleeping. But though the story mirrors some of the premiere episode, the web version is even more aligned with the graphic novels in its dynamic presentation of a single-panel format.