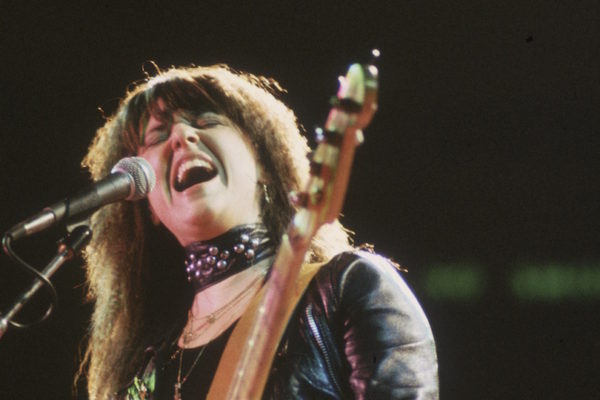 Female rockers slinging guitars are common enough in today’s music world, but back in the early 1970s, they were fewer in number. The eventual rise of bands like Joan Jett & the Blackhearts, Heart, and The Pretenders (led by Chrissie Hynde) changed all that, but there was someone who helped pave the way for them; Suzi Quatro. You might chuckle when you hear the name, recalling she played “Leather Tuscadero” on Happy Days but there’s more to her story than that and her pop duet with Chris Norman on “Stumblin’ In.” Quatro was born in Detroit, where she and her two sisters formed a band called The Pleasure Seekers. The group had some local success and even released a single before changing their name to Cradle.

While touring the Midwest in this later incarnation, the group was spotted by British producer Mickie Most, who believed Quatro could succeed as a solo artist, so he signed her to a contract, and Quatro moved to England. There, Most teamed her with writer-producers Mike Chapman and Nicky Chinn (songwriters for glam-pop groups like Sweet) who helped her create a string of hits in Europe, including “Can The Can” and “48 Crash.” Quatro has influenced artists as diverse as Tina Weymouth (of Talking Heads) and the all-female heavy metal group, Girlschool. If that’s not enough, here are five more reasons that this bass-playing firebrand rocks.

This tune from her second album Quatro (1974) fuels its opening declaration “All my life I wanted to be somebody, and here I am…” with a striking vocal and thrashing guitars. Definitely her signature song, “The Wild One” also inspired rocker-to-be Joan Jett, who has long proclaimed herself an avowed fan of Quatro. In fact, the 2010 biopic about The Runaways features Kristen Stewart as a young Jett trying to play this very song on her guitar.

This track from Quatro’s debut album Suzi Quatro was a huge hit in the UK, with its propulsive guitar riff and pile-driving drums. The song also gets a glam-rock sheen, courtesy of producers Chapman and Chinn. That said, there’s no doubt about who’s in charge here: The music video shows just how comfortably Quatro fits into the role of badass front-woman to a band full of males who are trying to parade their own tough-guy attitudes.

While Quatro had great success abroad, she wasn’t making much of a dent in the US, despite opening for established rockers like Alice Cooper. Then she was cast as “Leather Tuscadero,” the younger sister of Fonzie’s girlfriend “Pinky” on Happy Days. Quatro appeared on the show several times, and while some of her rougher edges were smoothed out for TV audiences, her rebellious spirit still shines through. Check out the original version of this number she performed on the show.

Quatro’s visibility on television led to her fifth album If You Knew Suzi (1978) which finally achieved serious sales success in the States. The album rose to number 37, and the single “Stumblin’ In” — a duet with Chris Norman (of Smokie) — climbed all the way to number four on the charts. It remains Quatro’s highest charting song stateside. If this song is all the Quatro you know, take note: “Stumblin’ In” is somewhat atypical of her work up to that point, although she did shift to a poppier sound on some of her later releases.

Quatro often recorded music associated with other artists ranging from Elvis Presley to Little Richard to The Beatles. One of the more interesting cover choices for the pioneering tough girl was this version of the recently departed Tom Petty’s “Breakdown,” which is also featured on If You Knew Suzi. As Petty tributes go, it’s a really good one.

PS.  A  rebel of a completely different kind…plus, some women who totally deserve Rock Hall honors….

2 comments on “Before Heart and Joan Jett, There Was Suzi Quatro”