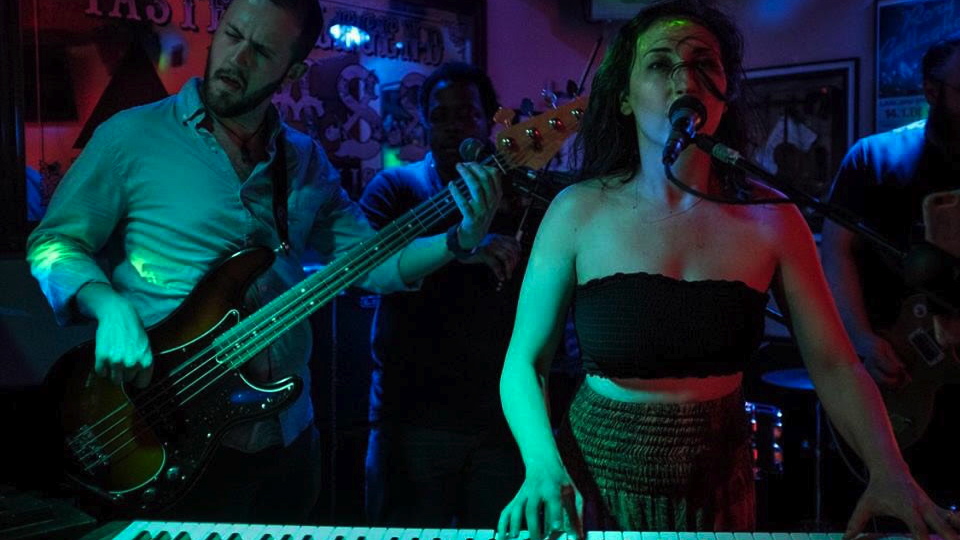 Sylvana Joyce & The Moment reflect a hybrid of genres and that’s part of what makes them so intriguing. Their piano-and-violin-infused songs are epically theatrical with strains of gypsy folk, cabaret, and jazz. Sometimes, they rock really hard, too, which may be why Sylvana has concocted a new designation for her music: “Drama Rock.” Geographically, Joyce also falls outside the typical. A native of Queens who’s now a resident of Jersey City, she’s been carving out a career just outside the sometimes shallow and unforgiving music scene in Manhattan without defaulting entirely to Brooklyn. How does she do it? Let’s go back to the beginning. Literally.

Q: What was your first memory of music?

A: My mom was a kindergarten teacher when she was pregnant with me and one of the songs she taught the kids was “Hello Mother, Hello Father.” Shortly after I was born there was a commercial that used that song and when the commercial came on I whipped my head around and tried to sort of gurgle-sing along with the music. So my mom likes to say that I had a keen musical ear even in utero. (Laughs.)

Q: So how long after that did you know you wanted to be a singer and performer?

A: When I was in elementary school there was an after-school acting program that put together renditions of musicals. A little while after that my acting teacher noticed I had talent and encouraged my mother to take me to an audition for a new Tony Kushner play called “Slavs!” I actually nailed the audition and they wanted to cast me, but I ended up being an understudy. They wanted to shave my hair because I was going to be a Chernobyl victim and my mom wasn’t sure I’d be able to handle such a heavy script. She wanted to protect me and kind of gave them mixed messages about whether I wanted to be in it. By then they cast someone else, but I was still able to be a part of it and I had a little introduction to the excitement of the Broadway scene.

Q: Your music seems well-suited for fans of epic adventure. Are you a gamer or an anime fan?

A: I’m absolutely an anime fan. The first series I got into as a pre-teen was Sailor Moon. I loved the storyline and heard that I could get a more full-fledged storyline from watching the Japanese version. So I scoured Flushing, Queens for VHS tapes of all the Sailor Moon episodes in Japanese with subtitles.

Q: Do you approach songwriting as if you are writing a play or a graphic novel?

A: I allow the song to build its own world. Even if that’s at odds with another song I’ve written. One song will be folky. Another will have some jazz elements. Another will sound like metal. I’m usually not thinking about continuing a vibe for a whole album. I’m usually thinking song to song. And I definitely give the guys [in the band] the freedom to discover how they want to express themselves in the world of the song.

Q: Have industry types ever told you: “If only you wrote shorter songs?”

A: I’ve met opposition the entire time. One of the earliest opportunities we had was to cover a pop song for an iHeart Radio competition and the winner would be able to perform with Carmen at the iHeart Radio Awards. So, our band covered their hit song, but after doing it, we felt like we lost a part of ourselves. I eventually learned to say no to certain things.

Q: Do you feel like you’re steadily gaining momentum, or has it been a struggle?

A: From 2010 to 2013 we’d been on a trajectory and building. The press came to us unsolicited and we won a bunch of Battle of the Bands. We felt like we were on a winning streak. But that started to die down and coincided with a lot of venue closures in Williamsburg. And the music scene started decentralizing and changing in NYC. We felt that loss; people being too busy to come out. Early in 2015, we played a gig and nobody showed up. I really thought, “Is this it?” It took me about a year, but I decided to stay local in Jersey City. I decided to focus on being a good person and not so much on building a dynasty. Competing with the status quo, I realized I couldn’t win and that I didn’t want it.

Q: And now you’ve tapped into a musical collective in Jersey City, right?

A: This music community is incredible. Just an entire modern orchestra of people who are insanely gifted and generous. And we all have come together organically and are putting on shows together. One coming up is The Last Waltz tribute [on Nov. 16 at White Eagle Hall in Jersey City, NJ]. More than 30 musicians will be contributing and we’re all friends!

Photo Credit: Image of Sylvana Joyce & The Moment by Paul Grossman courtesy of the artist

0 comments on “Sylvana Joyce: Outside the Shadow of Gotham”