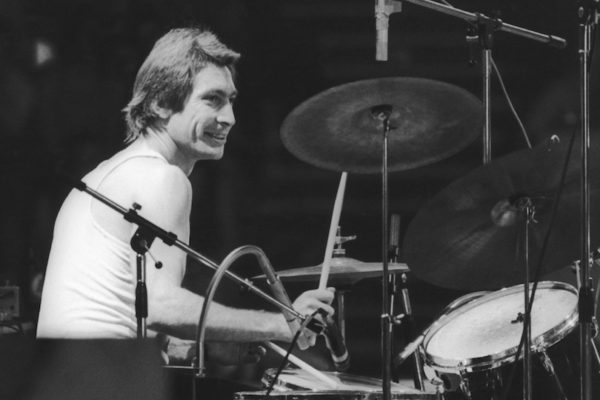 You may or may not agree that The Rolling Stones are “The Greatest Rock and Roll Band In The World” (I’m a Beatles Guy, more on this later), but their seismic impact upon popular music is undeniable. Their lengthy discography is peppered with some of the most important slabs in rock and roll history, they’ve set new standards for the size and scope of concert tours, and they’ve done it all while remaining faithful (with few exceptions) to the potent blend of blues, rock and roll, and R&B that first inspired them nearly six decades ago. So by now, there ought to be a book that examines The Rolling Stones from a scholarly, “deep dive” perspective: a studious, academic deconstruction and dissemination of their music and story, loaded with technical jargon and detailed accounts gleaned from hundreds of hours of interviews with various Stones associates.

Sympathy For The Drummer: Why Charlie Watts Matters is not that book. But thank God for that: instead, it’s a celebration, a verbal roller coaster ride through rock and roll, blues, jazz, drums, voodoo, sex, magic, and everything else that’s truly important in life. Mike Edison – author, raconteur, and former editor of High Times magazine – does not waste time with note-for-note forensic analysis of Stones records, speculative interpretation of the lyrics, how the drums were miked, or other such minutiae. But he’s clearly a die-hard Stones/Charlie devotee, and seemingly the only one qualified to have written this book: when he breaks down his favorite Watts grooves and fills, he does so with an insightful passion that jumps off the page and grabs you by your complacent shoulders and shouts, “Check this s*** out, man!”

That’s not to say that Edison doesn’t know his stuff. He goes deep with authoritative treatises on the history of the music, connecting Watts and The Stones not only to well-known idols like Chuck Berry and Bo Diddley but to their drummers like Fred Below and Ebby Hardy; to jazz and drummers like Gene Krupa and Sid Catlett, to the blues and the drummers of Chess Records like Earl Phillips, to the twin opposites of disco and punk, skating on the thin ice that separates all of these potent American musical forms. (At several points in the book he asserts, correctly, that “It’s all the same s***.”) When he pointed out, for example, that only The Stones could penetrate the onslaught of disco and punk by making what was, essentially, a country album (1978’s Some Girls), I found myself on a Manhattan-bound train with this book and saying out loud “Holy crap, he’s right!” By the time I reached the last page, I was almost – ALMOST – questioning my lifelong allegiance to The Fab Four. (Of course, the Beatles vs Stones thing is nonsense; we’re talking about two completely different kinds of talent and greatness, and in many ways, one could not have existed without the other, but that’s a whole other story for another article.)

Related: “When The Beatles Moshed It Up with The Stones”

It’s a gifted writer who can use the printed word to evoke emotions and sensations usually reserved for music and to help you hear music you’ve known your entire life as if you’re discovering it for the first time. Edison’s near-evangelical fervor for Charlie Watts, The Rolling Stones and the music that inspired them is irresistible and infectious, and essential. Jazz, R&B, country, the blues, and rock and roll are America’s finest exports, and Sympathy For The Drummer proudly exalts our nation’s own cultural heritage in print as much as The Stones did onstage and on record. Whether you’re a Stones fan or not is irrelevant: if you have a pulse, you’ll love Sympathy For The Drummer: Why Charlie Watts Matters. It’s an essential text that should be required reading for every musician (and music lover) at every level. Kudos to Mike Edison for reminding us what it’s all about!

3 comments on “Sympathy for the Drummer: Why Charlie Watts Matters”