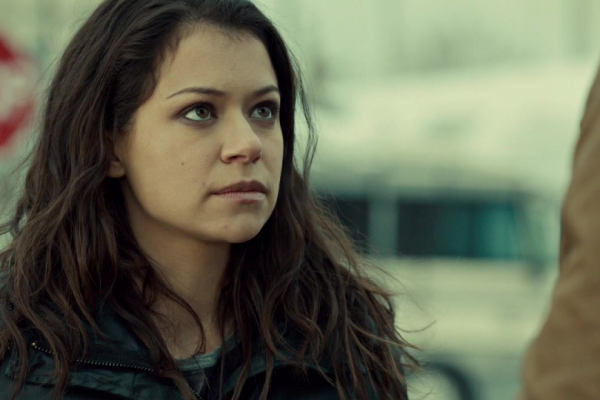 Ask any card-carrying member of The Clone Club and they’ll tell you, Orphan Black’s Tatiana Maslany is the best actress on television, bar none. Like a Meryl Streep on steroids, the show’s leading lady is so effective at creating endlessly distinct clone characters, you sometimes forget the same woman is playing them all. Thankfully, the members of the Academy of Television Arts & Sciences have caught on. Sure, some fools may label her a long shot to win Best Actress, so here are seven reasons Maslany needs to finally take home the statuette at the Emmy Awards on Sunday, September 18th.

Tatiana Maslany as Sarah Manning
Sarah’s the kick-ass mom we all wish we had. A tough broad with a giant heart and a sexy swagger, she seems at once over her head and able to rise to any situation. On any other show, Sarah would be the fan favorite; she’s the type of gal men want to get seduced by and women want to emulate. Granted, Maslany might never have gotten nominated for this part alone, but that’s where the rest of the Clone Club comes into play. Read on!

Tatiana Maslany as Rachel Duncan
Cold as ice with a blonde bob as well-constructed as her motives, Rachel gives Maslany a chance to be the boss, without heart getting in the way. As Queen of Neolution, the series villainess is a schemer with style. She’s always three steps ahead of everyone and never has a hair fall out of place. Robin Wright got nominated for a similar performance on House of Cards, and that was the only one she had to give. Just saying…

Tatiana Maslany as Krystal Goderitch
In Season 3, Maslany defied expectations by creating another new standout character. What could have been a one-off joke, the ditsy manicurist with cleavage, grew into one of the most heartwarming characters in the series. Maslany, like Monroe before her, is too smart to play someone as a dumb joke. You can see the intelligence behind Krystal’s eyes, even if she’s got a habit of pretending there’s nothing behind them.

Tatiana Maslany as Alison Hendrix
Suburban super mom. Drug dealer. Neighbor-killer. How many Golden Globe nominations did Mary-Louise Parker get for Weeds? Anyway, this is probably Maslany’s most polarizing character, a woman intense to the point of panic attack, able to juggle the fight against a worldwide clone conspiracy with her duties at the PTA. Plus, she acts in the show’s community theater (which is a meta level of acting in acting).

Tatiana Maslany as Elizabeth Childs
An emotionally unstable cop who slowly realizes her entire life was a lie, Beth Childs’ story was that of a woman undone. Yet another completely unique creation, this brittle and terrified woman driven to suicide is a smaller part, yes, but it begs the question – should Maslany be nominated for Best Supporting Actress, too?

Tatiana Maslany as Cosima Niehaus
Crunchy, kooky Cosima is the role that makes Maslany’s acting talents seem limitless. Almost every character on the show gets a love story, but none feels more tragic than the romance between Cosima and Delphine. Seemingly doomed from the start, these characters weather betrayal and assassination attempts, kidnapping and online dating. Did we mention that Cosima is suffering from a terminal illness? You know, just to up the ante.

Tatiana Maslany as Helena
Of all the “Sestras” (i.e., cloned sisters), none threatens to jump the shark more than this psycho killer goofball, yet whenever this bottle blonde assassin pops up, the show becomes electric. We think it’s safe to say that there’s never been a character quite like her on television. Sometimes nemesis, sometimes clown, sometimes abuse survivor, sometimes wacky house guest, Helena is a one-of-a-kind performance that could easily stand on its own as an Emmy contender. Dare we say this is the part that should get her the prize?