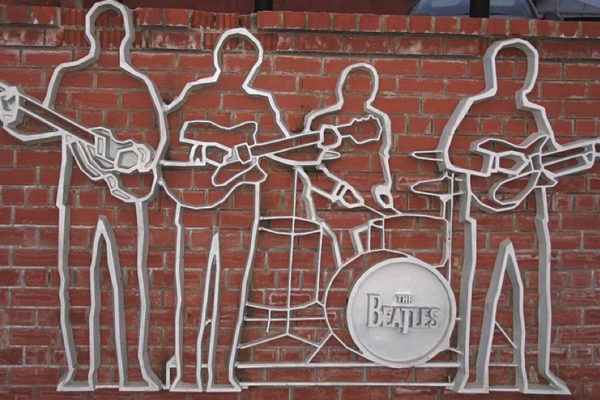 Sometimes, when a musician auditions to join a group, it’s not how he plays an instrument that gets him into a band but the fact that he owns an instrument—or an amp or two.  It certainly didn’t hurt Bill Wyman when he strolled into the Stones’ audition lugging three amps including a chic Vox AC30 model.  He commented: “I thought the opinion of the boys was, ‘Real good amps, the bass player’s nothing special, but we’ll keep him so we can use his amps.’”

Another English group shared the same mindset when they allowed Colin Hanton to join them in 1956 simply because he owned a drum set.  Colin had a three year run with the band that ended with him stuffing his drums in a closet for 38 years; all because of a row he had with two of his bandmates: John Lennon and Paul McCartney.

But before Colin warmed up a drummer’s seat for Pete Best and Ringo Starr, he was an unwitting witness to history. In a 2018 interview plugging his memoir, Pre-fab! The Story of One Man, His Drums, John Lennon, Paul McCartney and George Harrison, he saw Paul tell John: “Look.  We got to start doing our own stuff and John realized that if Paul could write songs, he didn’t see any reason why he couldn’t write songs.”

One of Paul’s compositions was “In Spite of all the Danger,” the only song he ever co-wrote with George Harrison.  On July 12, 1958, the Quarrymen (John, George, Paul, Colin, and pianist John Duff Lowe) paid seventeen shillings and sixpence to cut a shellac disk at Percy Phillips’ shabby, one microphone recording studio in Liverpool.  Since the band split the cost of the recording session, it was agreed that all would share the disc amongst themselves.

In a 2021 interview on the Drum History podcast, Colin recalled that John took it to his home for his mother, Julia, to listen, only for her to be killed three days later by a car driven by Eric Clague. Clague was an off-duty policeman who later became a postman—and delivered fan mail to Paul McCartney’s old home.  Colin said, “I can only assume Julia listened to it.  After she died, John was a bit of a recluse for several weeks and couldn’t face the world.”

The record was also passed around to friends of the band.  Colin remembered: “I had a friend, Charlie Roberts, who worked in a factory and they had a PA system and you could take records and play it for the factory workers but then our record was just left with him. I forgot about it, we all forgot about it.  Then in 1997, I meet Charlie and his wife said in the ’90s, there was a mad craze of dipping records into boiling water to soften them up and make them into plant pot holders.  And she was sitting before a pot of boiling water and she picked up the Quarrymen record and was about to dip it in when she thought, ‘No, that should go back to one of the Quarrymen.’ And Charlie met Duff [pianist John Lowe Duff] and Duff put it in his sock drawer for years.  Duff contacted a newspaper reporter who reported that Duff was seriously thinking of selling it. Paul got word of it then contacted Duff’s mother who contacted her son who sold it to Paul.”

When “In Spite of all the Danger” and its flip side, “That’ll Be the Day” appeared on the Beatles’ 1995 Anthology 1 album, Colin laughed, “I got a couple of bob for that.”

The retired Colin, who owned an upholstery shop in Liverpool, doesn’t regret saying goodbye to John, Paul, George, and possibly fame and fortune; recalling, “I didn’t think we were getting particularly far. Those three were started to mold together. They were spending more time together without me.  I wasn’t having an awful lot of fun so it was time for me to pack up.”

Colin wasn’t having a fab-ulous time in 1959 when the lads played at Finch Lane Busmen’s Sports and Social Club in Liverpool.  After they had finished their five-song set, Colin said the group heard: “‘There’s a pint at the bar!’  And that’s the worst thing anyone could ever say.  And John, Paul and myself, we didn’t stop at one pint.  We got quite drunk. George (who was then 15) was sober because his mum and dad were in the audience.  And the announcer came over to us and said, ‘Five minutes and you’re back on again.’  I didn’t know we were doing two spots.  I was a bit annoyed about that.  And we went on and it was a disaster.  John and Paul couldn’t stop giggling.  And then I found out that the two sets were an audition for a guy from the bingo hall who wanted to hire us to play regularly at his hall.”

Lane Busmen’s announcer told the boys that the Bingo hall owner loved their first set but the second one turned him off from hiring them.  It also turned Colin off from drumming for 38 years.  But in 1997, a batch of Quarrymen, including Colin, Pete Shotton, Eric Griffiths, Rod Davis, and Len Garry, got together to do a “one-off” to help raise funds and repair St. Peter’s Church Hall where John first met Paul.  The reformed group later embarked on worldwide tours, not exactly inciting sick Quarrymen Mania, but earning some healthy paychecks.

Colin is now the subject of a recently completed documentary called Pre-fab! Hopefully, there will be a sequel where Colin will dispel the myth that the Quarrymen pinched their name from a pre-historic rock group that backed Fred Flintstone as he sang “The Twitch.”