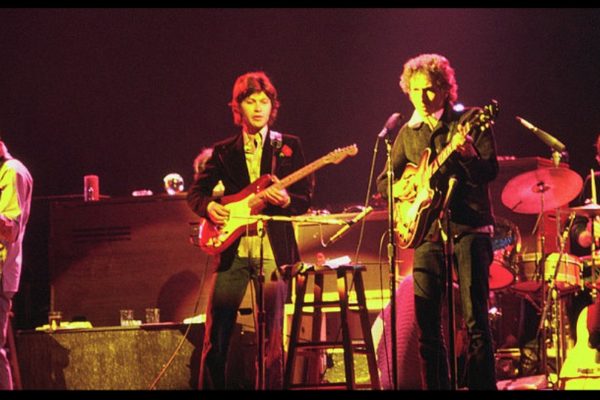 Some people know The Band solely by their Bob Dylan connection, whom they accompanied both in the infamous 1966 electric tour and the recording of the basement tapes one year later. Others know the group for the two game-changing albums they did after escaping Dylan’s shadow, 1968’s Music from Big Pink and 1969’s The Band. You may also be familiar with their farewell concert film, the Martin Scorsese-directed The Last Waltz. And you may just be fooled to believe that’s all there is to know about the Canadian-American group, when in reality that’s just the beginning and the end of their story. All of the albums in-between are interesting in one way or another, with plenty of cuts that stand up to the highlights of the first two albums. And here are what I consider to be the 10 best ones:

[amazon template=right aligned image&asin=B000TENFKO]10. “Out of the Blue”
A largely forgotten Band song, this was included on the album release of The Last Waltz without being featured in the film itself. A studio track, it is also a rare instance of Robbie Robertson taking over the lead vocals – and he does a damn good job, injecting a certain dose of innocence into this moody ballad. The result ends up sounding more like a 70s soft rock/pop product rather than something rootsy. But even if the track is hardly representative of what The Band were all about, it’s still one of their most affective and effective ballads, not to mention an overlooked gem.

9. “Georgia on My Mind”
A sad part of navigating chronologically through The Band’s discography will always be the sight of Richard Manuel slowly and gradually losing his voice. By 1976, the falsetto that once could send shivers down your spine had turned into a raspy croon struggling to hit those high notes. But the good part is that this new style was sometimes perfect for the material in question – with “Georgia on My Mind,” he took on the herculean task of doing his best Ray Charles and managed to pull it off. The song was eventually included on 1977’s Islands, no more than an odds-and-sods type album released as a contractual obligation, but not without its small charms.

8. “Acadian Driftwood”
With “Acadian Driftwood,” The Band seemed to aim at another story-telling epic in the league of “The Weight” and “The Night They Drove Old Dixie Down.” And while maybe not as immediately memorable as those, it certainly shares the same immersive quality of creating its own world and absorbing the listener in it for the whole 7-minute duration. Manuel, Levon Helm and Rick Danko trade lead vocals proving once again that The Band had three voices all with their own distinctive personality, but also with an excellent blend when it comes to joining in together for the chorus.

7. “All la Glory”
With every single member a multi-instrumentalist, The Band were always masters of arranging a track. It was all about the small touches and how they complemented each other, and “All la Glory” may just be one of the best examples of that. The accordion, the slide guitars and (later on) the organ all set a wonderfully lazy and evocative mood for Levon Helm to come in and sing in his trademark world-weary tone. A perfect Sunday afternoon listen.

6. “Ophelia”
Not every Band song has to have hidden deeper meaning or a pouring of emotions; sometimes they were at their best when locking into a solid, funky groove and “Ophelia” is just that. This is one of those songs that’ll make you move in one way or another, whether it is actual dancing, tapping your foot or even air-drumming. A lot of this has to do with Garth Hudson’s Dixieland-influenced horns, which, along with the inviting chorus make for another drunken, good-time, sing-along classic in the vein of “Rag Mama Rag” and “Up on Cripple Creek.” Would be covered by many other artists.

5. “The Moon Struck One”
Many fans usually point at Robbie Robertson taking over the song-writing duties as the main reason for The Band’s decline. But without getting into all that, I’ll just say that I rarely feel any member is underplayed in a song. Even if Robbie is credited as the main songwriter, the ending results still feel like a collaborative effort with each member getting time in the spotlight. Take for example “The Moon Struck One,” penned by Robertson but really made what it is by Manuel’s heartfelt, heartbreaking vocal performance. The latter was always The Band’s to-go vocalist when it came to ballads, and this is just the perfect continuation to “I Shall Be Released,” “Whispering Pines” and “Sleeping.”

4. “Stage Fright”
One of the main reasons for The Band’s break-up was Robbie getting fed up with touring and the rock ‘n’ roll lifestyle in general and, as he himself states in The Last Waltz, not wanting to become another Joplin/Hendrix-type victim of it. But it seems that by 1970 he already had a love-hate relationship with the idea of going on stage every night, as captured in the iconic “Stage Fright.” Danko takes the vocal duties in a fitful paranoid style and the lyrics sum up perfectly how the lifestyle takes its toll on you both psychologically (“Since that day he ain’t been the same”) and physically (“And the doctor warned me I might catch a death”).

3. “When I Paint My Masterpiece”
By 1971, it had been quite some time since The Band covered a Bob Dylan song. Of course their debut had “Tears of Rage,” “I Shall Be Released” and “This Wheel’s on Fire” which proved them to be some of the best interpreters of the singer-songwriter’s material. But since then every album would be filled with original material from top to bottom. On Cahoots they take the relatively forgotten Dylan track, recorded at a Leon Russell-produced session and released only on a Greatest Hits compilation, and once again completely make it their own. “When I Paint My Masterpiece” has a distinct European feel due to the accordions and mandolins, as well as the countries/cities name-dropping in the lyrics.

[amazon template=right aligned image&asin=B00003CXB1]2. “The Shape I’m In”
Lyrically, The Band’s first two albums were filled with stories of wars, thieves, servants, farmers and poverty. On the third one, they seemed to switch the focus on themselves, moving into a more personal territory. “The Shape I’m In” is said to have been written by Robertson directly about Manuel, whose alcohol and drug addiction kept getting worse at the time. His energetic vocal performance proves that he resonated with the subject matter, and the catchy chorus and guitar-organ dialogues made the song a deserved Band classic.

1. “It Makes No Difference”
This is, simply put, one of the best heartbreak songs ever written. But it is also a song that I feel only truly reached its full potential when performed live in The Last Waltz. It’s there that Rick Danko pushes what was already a deeply felt vocal performance into new heights, where lyrics as simple as “And the sun don’t shine anymore / And the rains fall down on my door” have a devastating effect. It’s also there that Robbie’s weeping guitar lines make the most sense with the message of the song. And finally, the moment when Garth comes into the spotlight seemingly out of nowhere and sends the crowd into ecstatic applause with his saxophone playing is just pure Band magic. It’s moments like these that won’t ever be replicated by anybody.