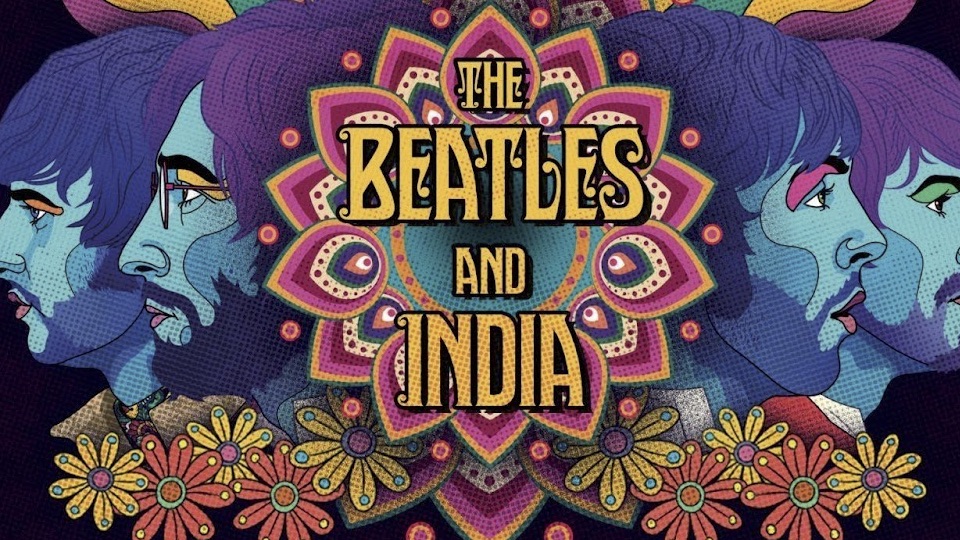 We think we know the story. After they’d conquered the pop-music world in the mid-1960s, the Fab Four head to India to seek spiritual truth and meditate with the Maharishi Mahesh Yogi.  While there, George Harrison learns the Sitar with help from Ravi Shankar.  The foursome discovers that ‘Rishi is hitting on women, John becomes disheartened and writes “Sexy Sadie” as a veiled unmasking of the guru, and they all leave with the thought that they had been taken in by a fraud. Nonetheless, George sneaks in sitars, Eastern spirituality, and other Indian sounds styles into several songs.  The end. right?

To the casual Beatles fan, that’s a reasonably accurate depiction.  But even devoted aficionados don’t know all the details. The new film, The Beatles and India by directors Ajoy Bose and Peter Compton (streaming here) delivers interesting background about this part of the Beatles chronicle.

The film, narrated via accounts by members of the Beatles, reporters who were there, and locals who interacted with the group, details how George’s pregnant mother used to listen to eastern music in 1942 during the repeated air raid alerts while in Liverpool. We are shown that, as is commonly known, it was Harrison that was drawn to the eastern teachings, lifestyles, and spirituality. The more he listened to the music, the more he loved it. He felt that it provided even more musical freedom than jazz (widely considered the freest of the musical styles).

While filming Indian restaurant scenes for Help! in 1965, George saw a sitar and plucked a few strings, finding the sound funny but interesting. Later, in inner circles, he continued to hear the name Ravi Shankar, often through acquaintances with members of the Byrds. Harrison purchased one of Ravi’s records and found the music emotionally engaging, though he couldn’t figure out why. The group also first heard of yoga and meditation during filming in the Bahamas, so they decided to travel to Delhi, India to learn more. As in the West, they were inundated by fans, and their interest in Indian musical instruments drove sales way up.  And while the experience was frustrating because of the lack of privacy, they were immediately enthralled by what they found.

The Indian community was not used to such attention. Once the British left their colony for good in 1947, the country became quite isolated. At the time there was a feeling of embarrassment with Britain’s disengagement. This made its way into the culture, causing many to seek meditation and turn away from the rest of the world. When Beatlemania started, younger Indian musicians were drawn to the music, with its upbeat lyrics about love and happiness. By the mid-1960s, average Indian teenagers were hooked on the Fab Four. The members of the Beatles-styled Indian music group “The Savages” are interviewed on what drew them to the music, and describe a comical vignette about going out dressed as the Beatles, with mop-top wigs and being urged to pick up instruments and play some Beatles songs.

A good part of the narrative covers how the Beatles were dawn to Maharishi’s meditation gatherings while in Britain. Both the band members and their wives experienced these spiritual sermons. He invited the four couples to Bangor, Wales to study with him, and then to Rishikesh, India to stay at a mountain retreat to further explore their spirituality. This coupled with the untimely death of Brian Epstein in 1968 caused them to make the journey, if only to deal with their sorrow for the loss of a close friend.

The most interesting part of the documentary is the firsthand accounts of what happened while the Beatles were in seclusion in Rishikesh. We’re taken through the compound as it appears today, and it’s compared (and sometimes eerily overlaid) with original videos of the same locations from the same viewing angle. Modern-day interviews with Nancy Cooke de Herrera (née Veitch), publicist for the Maharishi, describe how she was responsible for the Beatles’ every need, from making sure the accommodations were upgraded to reasonably modern, to helping the band routinely receive supplies of fresh vegetables.

There are also accounts of the power the Maharishi had over people and a good dose of skepticism about the spiritual babble that people were asked to repeat while meditating.  And while the leader’s alleged sexual exploits are not mentioned, you can surmise that his powers of coercion probably got him the favors he sought. He is quoted as remarking that it is obviously more pleasant to look upon and be around attractive people.

Most viewers will be familiar with the origins of “Dear Prudence” and “Bungalow Bill,” written during the group’s stay in India. In The Beatles and India, we hear from the people who were part of the events that underpinned the songs.  Also, an explanation of the meaning of  “Jai Guru Deva, Om“ from Lennon’s “Across the Universe” is explored. And it turns out that most of the songs that appeared on The Beatles (White Album) were conceived of during this stay.

Pattie Boyd (Harrison) provides a good portion of the narration, describing George’s inner thoughts at the time. She describes her renewed spiritual awakening that resulted in a new “birth day” celebration, which included both Eastern and Western music, while we see videos of the original and current state of the location of the event. Mike Love, Donovan, and jazz flutist Paul Horne contributed to the festivities.

The film wraps up with a debunking of a conspiracy theory that suggested the campus at Rishikesh and Maharishi were part of a Soviet conspiracy to compel famous people to disregard politics and instead focus on themselves. A KGB agent confesses that while that would have been nice, the Soviets were just glad that such sentiments were being espoused at the compound without any secret effort. Also, we learn Maharishi had privately negotiated movie rights for films of the people who came to meditate with him.  He suggests that he prefers rich, influential people to meditate with him.

All of this leads to the band leaving, and John and Paul having a press conference to suggest they had been fooled by a fraud. And while the common theory is that was the end of the Beatles’ interaction with the Maharishi, in fact, they each ultimately reconciled with him. In interviews with band members from the 1980s to today, all four Beatles remark that the Maharishi was not a bad person and they had learned a great deal from the experience. Paul took his daughter to meet him in 2007. Harrison continued to be enthralled with Indian spirituality and music, forming a lasting friendship with Ravi Shankar. George returned before his own death to apologize to the Maharishi, who remarked that they were angels and had nothing to be contrite about. Ringo concedes that they never really saw anything inappropriate happen.  Archival tapes show John and Yoko speaking positively of the visit.

All this uncommon knowledge and much more is handled well by the filmmakers. Where possible, interviews with people who were part of the various times the Beatles visited India provide personal remembrances of what happened, including reporters, music shopkeepers, fans who snuck into the inner sanctums, current-day Rishikesh park rangers, and workers at the compound. This film is for anyone who wants to understand one of the biggest impacts on who the Beatles grew into, both together and individually, and in some ways, what may have driven them apart.