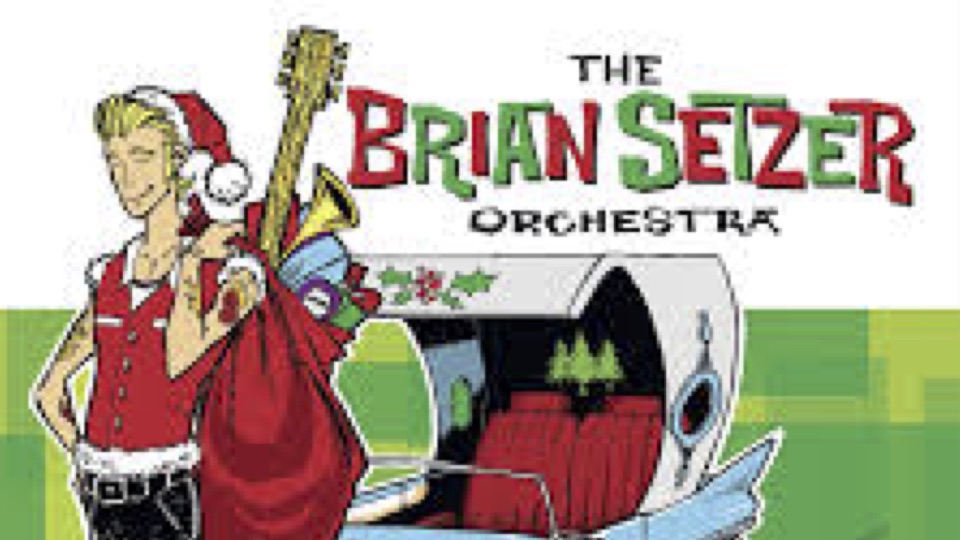 Fans of Brian Setzer were no doubt saddened to learn that the singer-guitarist would be forced to cancel his 16th annual “Christmas Rocks! Tour” due to a “severe case” of tinnitus. The announcement came just days before the Brian Setzer Orchestra was set to kick off a 26-city run in Minneapolis. Those bummed about missing out on seeing the iconic rocker live—and, of course, concerned for his long-term health and well-being—can at least rejoice in the knowledge that he recently released limited red & white and green & white 12″ vinyl versions of two seasonal classics: Boogie Woogie Christmas and Dig That Crazy Christmas.

Boogie Woogie Christmas, released in 2002, was the BSO’s first foray into Christmas music and, given their penchant for holly jolly merriment, one wonders why they waited nearly a decade into their tenure before tackling the genre. Songs like “Jingle Bells,” Leiber and Stoller’s “Santa Claus Is Back In Town” and Chuck Berry’s “Run Rudolph Run” seem tailor-made for the band’s particular brand of horn-soaked, six-stringed swing.

Perhaps even more revelatory is the band’s take on a much older holiday classic, Tschaikovsky’s “The Nutcracker Suite.” The song kicks off in full, Rat Pack mode before settling into the more familiar celesta-tinged delicacy of “Dance of The Sugar Plum Fairy.” Another pleasant surprise is Setzer’s duet with Ann-Margret on Frank Loesser’s 1944 classic, “Baby It’s Cold Outside.” For a singer like Setzer, who so often channels Elvis (including on this record’s “O Holy Night” and the aforementioned “Santa Claus Is Back In Town”), it seems fitting he would pair with one of the King’s leading ladies.

The elegiac choral rendering of “The Amens” rounds out the set on an appropriately reverential note. As Christmas discs go, the Grammy-nominated Boogie Woogie Christmas is a fairly well-rounded affair that is sure to appeal to a broad range of music fans this or any other holiday season.

Disc 2 is Dig That Crazy Christmas, originally released in 2005 on Surfdog Records. Once again Setzer and company remake classics like Irving Berlin’s “White Christmas” and Cahn and Styne’s “Let It Snow! Let It Snow! Let It Snow!” using their mix of big band, exotica, and rockabilly. And though his basso profundo will likely not replace Thurl Ravenscroft’s in the collective imagination, Setzer’s take on “You’re a Mean One, Mr. Grinch” does feature a wickedly delicious guitar solo and a jazzy, feedback-laden ending that makes its own indelible mark on the song. “Jingle Bell Rock” is just what you’d expect from the BSO and, of all their holiday covers, is the one that gets the most airplay year after year (or so it seems to this particular fan).

Setzer’s rough-hewn vocal on the Louis Armstrong classic “Zat You, Santa Claus” revives that gem for modern-day audiences. Once again, though, it’s his nifty fretwork that distinguishes his version from other run-of-the-mill rehashes and leaves no doubt that a master instrumentalist is at the helm for this one. He even manages to slip in a few notes from a song he played with that other band of his, the Stray Cats (“Stray Cat Strut”).

In addition to the covers, Dig That Crazy Christmas features two Setzer originals—“Hey Santa!” and the bluesy call-and-response “Santa Drives a Hot Rod”—and another duet, this time with Setzer’s wife and BSO background singer, Julie Reiten. As Ann-Margret did three years prior, Reiten joins Setzer on a Loesser-penned tune: “What Are You Doing This New Year’s Eve?”

A few of these BSO covers of Christmas classics have already found their way into the holiday canon. The question is: how many of these limited edition discs will find their way into Xmas stockings and onto holiday playlists? If it’s more than a few then surely that will be music to Brian Setzer’s ears.

0 comments on “The Brian Setzer Orchestra Drops Some Christmas Goodies”