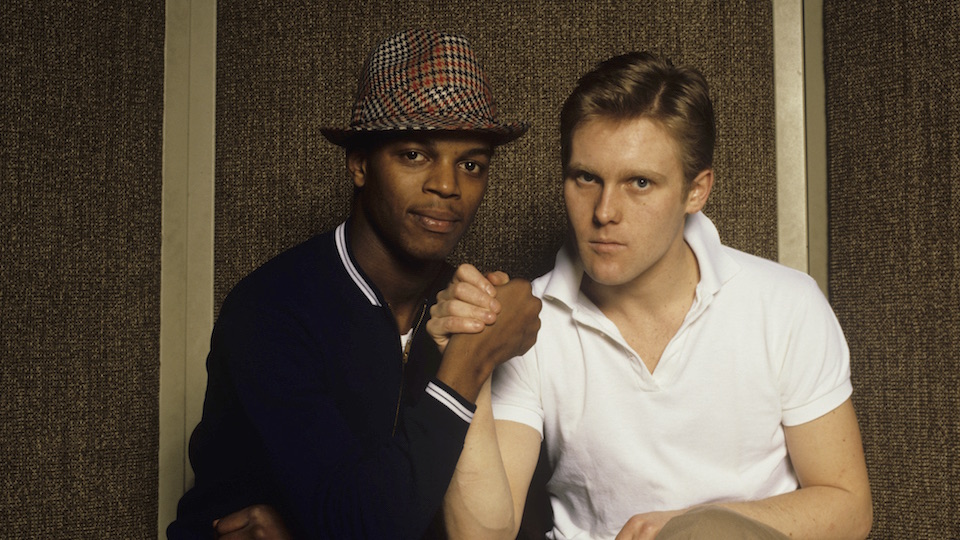 “Mirror in the bathroom / please talk free…” There’s something slightly decadent about the sound of the 1980 hit “Mirror In the Bathroom” by the English Beat. The song mixed punk, ska, reggae, and who knows what as it introduced us to a new kind of New Wave that gave a preview to all the hybrids ahead. But back in 1978, The English Beat — or “The Beat” as they were first called until challenged by an American group that had taken the name a nanosecond earlier — were ahead of the curve. When singer Dave Wakeling joined Ranking Roger and others to form this seminal band of the early ‘80s, the hits came.

“Tears of a Clown.” “Save It for Later.” “Can’t Get Used to Losing You.” “I Confess.” The band may have never cracked the Top 10 but they were still a major draw, touring alongside the likes of The Pretenders, David Bowie, The Clash, and R.E.M. Then, in 1983, the band imploded. Or maybe, um, “subdivided.” Wakeling and Ranking Roger split to form General Public (“Tenderness’) while Andy Cox and David Steele went on to join Roland Gift in creating Fine Young Cannibals (“She Drives Me Crazy”). Obviously, talent doesn’t take a day off, despite internal disputes.

General Public labored on for a bit. Until it didn’t. Wakeling continued to make music. Roger took a time-out during which he gave lessons for inline skating a.k.a. rollerblading, thereby staying trendy even when he’d switched fields. Happily, these days, both former members of the English Beat are back in the game, albeit separately. Roger works throughout Europe under the moniker of The Beat Featuring Ranking Roger; Wakeling helms The English Beat, even as he regularly throws General Public hits into the set. [Editor’s Note: After publication, Ranking Roger passed in March 2019].

Of the two, Wakeling is perhaps the more prominent. After living in California for over three decades, he released the crowdfunded Here We Go Love (2018), the first English Beat project since 1982’s Special Beat Service. Now in his sixties, the expatriate pop singer notes in an interview with Denver’s Westword that much of the societal turmoil stateside happening now mirrors what was happening in his native Britain when the band first formed:

“All of a sudden, everybody’s on high alert about China and Russia and nuclear war and Iran… It’s all the same sort of fear. It’s not specific. Nobody’s saying anybody’s going to do anything, but we’re all standing on our tiptoes. …”

Far from looking at the various crises with disinterest, Wakeling admits he’s one of those artists who uses his art to process and to react to what’s happening in the world around him.

“I’m always interested as a songwriter because you watch on the TV, and out of the corner of your eye, certain things going on in the world can inspire a song. So I keep a keen eye on things. And the similarities to the late ‘70s are remarkable.”

Furthermore, he notes that the years haven’t lessened his passionate interest in societal change. From an interview with the San Francisco Examiner, Wakeling had this to say:

“I think people who saw the hippie revolution and the punk revolution expected that the larger nations were going to leave the world in a better and a safer state than our parents have. I think people are coming quite surprised and are perhaps disappointed that it doesn’t necessarily seem as though that’s the case.”

The beat does indeed go on.