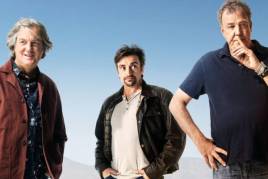 The wait is finally over. The boys (and cars) are back — and it feels so right. Sure, their new show has a different name and a different home, but Jeremy Clarkson, James May, and Richard Hammond — the former stars of the BBC’s Top Gear — pick up right where they left off with Amazon’s The Grand Tour. The debut episode, “The Holy Trinity,” has everything we’ve come to expect from these three pals and their team: lots and lots of car porn, self-deprecating humor, racing, beautiful scenery and production, and moments of surprise. Add in a new test track called “The Eboladrome” and you know you’re in for one entertaining ride.

The Grand Tour does not ignore the reason for its existence in the first place either — Jeremy Clarkson’s abrupt departure from the BBC after he allegedly physically and verbally attacked a Top Gear producer in 2015. (May and Hammond also left when Clarkson’s contract was not renewed.) The show opens with Clarkson on camera while audio of news reports about his fate are played. He walks through the rainy England weather and catches a flight to sunny Los Angeles.

From the opening sequence, it’s clear that Amazon has spared no expense with TGT. Clarkson and his two partners in crime arrive in style, driving some kickass Ford Mustangs, at a huge outdoor concert in the California desert, the song “I Can See Clearly Now” providing some apt messaging. When the eight plane flyover is done, we get reintroduced to our favorite hosts. Clarkson begins with James May, saying “He was born in 1836.” Then May introduces Richard Hammond with this quip: “Ladies and gentleman, you probably can’t see him from the back, but I assure you he is here.” Finally, Hammond does the honors for Clarkson with, “He’s basically a shaved ape in a shirt.” Gosh, did I mention their cheesy humor? It’s pretty obvious that these three like and admire each other — in fact, their presence and friendship were crucial to Top Gear‘s success.

Also key: amazing supercars presented in fantastically produced, filmed and edited packages. The majority of this first episode is delivered in that same way, this time featuring three supercars with hybrid technology — a McLaren P1, a Porsche 918 (my husband’s personal favorite), and a Ferrari LaFerrari. The hosts take these very expensive technological wonders out for a spin on the track and later race them down a straightaway. Just pure fun.

Though The Grand Tour can feel like Top Gear, just with a new name, the new show obviously incorporates some rebranding. Instead of “The News,” we get “Conversation Street.” Instead of the “Star in a Reasonably Priced Car,” TGT gives us a silly segment called “Celebrity Brain Crash.” Additionally, I very much enjoy the introduction to the new test track, called “the Eboladrome” (so named because, viewed from above, it’s the same shape as the Ebola virus). Located in England, the track is surrounded by trees, animals, an old lady’s house, an unexploded WWII bomb, and an electrical substation. You can’t say it’s not interesting!  And just like the TG track, the twists and turns have been given fun names like “The Isn’t” straight and “Your Name Here” corner. NASCAR driver Mike Skinner (“The American”) is unveiled as the show’s test driver. (The Stig remains on Top Gear!) In this episode, Skinner drives a BMW M2, or what Skinner refers to as “a cry for help.”

This first episode of The Grand Tour will have you smiling, laughing, and remembering the good old days of Top Gear. Clarkson, May, and Hammond will be traveling the world for their new Amazon show — filming in front of audiences in South Africa, Germany, the UK, and elsewhere. A sneak peek at what’s to come shows us plenty more of our favorite trio in ridiculous situations with racing, explosions, cars in water and all sorts of hi-jinks. The season will have a total of twelve episodes, with a new one released on Amazon Prime each Friday. To that I say, lay down some rubber.

0 comments on ““The Grand Tour”: “Top Gear” Is Back With a Different Show”