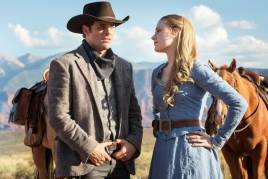 Live without limits. That’s what the fictional, Wild West theme park on HBO’s Westworld promises its guests. It’s also what the show delivers to its viewers: a chance to slip free from the everyday mores of civil society and get to our true obsessions – namely, sex and death. Sound familiar? Well, they’re at the heart of another HBO hit, a little program called Game of Thrones. Maybe you’ve heard of it. After years of searching for a worthy successor to the network’s biggest hit, Westworld looks ready to take a seat on the Iron Throne, thanks to a heady mix of smarts, sex and bloody mayhem.

Much like the 1973 movie it’s based on, Westworld tells the tale of a robotic theme park where tourists can come and play Cowboys and Indians for a few weeks of violent vacay. But unlike its source material, which topped out as pulpy fun, the breakout-hit series seems just as concerned with big questions about life, freedom and the human experience as it does with cool sci-fi set pieces and robot copulation. Existential dread is the name of the game here, whether the guests and the scientists behind the park want to admit it or not.

The series itself plays the same game with us. At first glance, Westworld feels like the latest “mystery box” show (akin to Lost or Alias), prompting endless and outlandish fan theories that lead to a never-ending rabbit hole. What is the maze? Why are the robots remembering? Who is transmitting company secrets? Are there multiple timelines messing with our heads? Who is Bernard?!  These questions may lead somewhere or they may peter out. Don’t get too attached yet. Remember how much we cared about the smoke monster or the Rambaldi artifact? What did that get us again?

But those questions and concerns aside, Westworld is nailing one thing right. It’s doing mood better than almost any other show on television. Set to a score of modern hits twanged out by a player piano, the series generates an uneasy dread that makes it impossible to just sit back and enjoy the carnage and carnal delights. Now, if it’s going to really succeed, Westworld is going to have to double down on its exploration of the human condition. So far, it appears the powers-that-be behind the show know that. The Man in Black’s quest for The Maze is really a search for reasons that life matters while brothel-keeper Maeve Millay’s desire to remember is a journey of self-discovery. The fact that both of these characters kick ass – while showing some too – only makes it all the more fun.

Sex. Death. The meaning of life. Those are three pretty profound topics to spin a story around. But whether you prefer a mystery whose central question is “who done it” or “who am I,” HBO’s Westworld looks to have enough T&A, gunfights, and crazy plot twists to keep us entertained for five more seasons. Can it do it? We can’t tell yet. But what’s clear is Westworld is a hit.