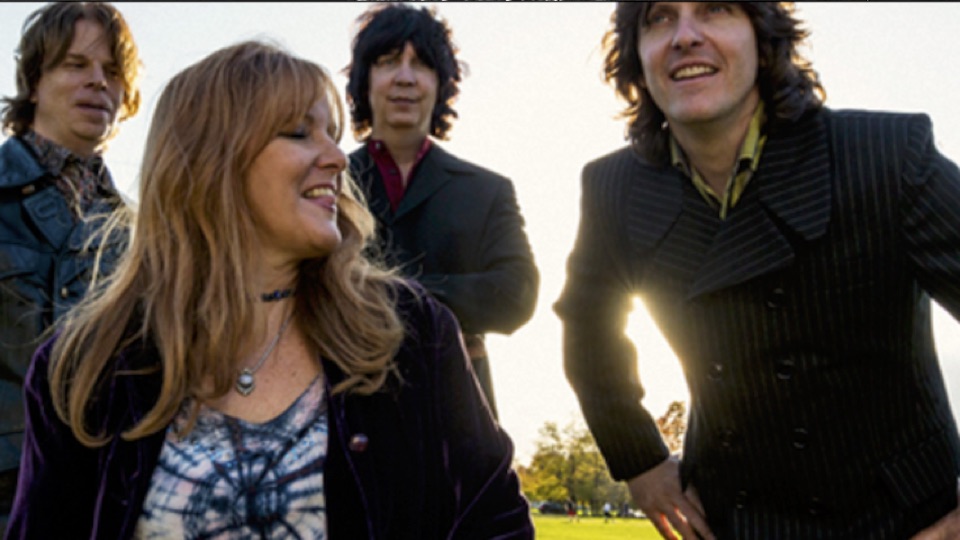 The Grip Weeds are one of the foremost modern practitioners of the psychedelic rock, garage rock, and power pop genres. The music of this well-respected New Jersey band is strongly influenced by the mid to late 1960s sounds of The Beatles, The Rolling Stones, The Who, and Buffalo Springfield. Since the band formed back in 1998, they’ve been captivating their fans with fantastic live performances and excellent discs such as 1994’s House of Vibes and 2015’s How I Won The War. The current lineup of the band features Kurt Reil on vocals, guitar, drums, and keyboards, Kristen Pinell Reil on guitars, percussion and vocals, Rick Reil on vocals, guitar and keyboards, and Dave DeSantis on bass. The Grip Weeds have just released their latest album, DiG, on JEM Records. It’s an outstanding disc, celebrating the garage rock and psychedelic era music that inspired the band. DiG includes classic songs from The Zombies, The Byrds, and The Monkees, but the album is also chock full of lesser-known (and equally memorable) tunes from bands such as Mouse and the Traps, The Gants, and The Nightcrawlers. The liner notes for the album are provided by Lenny Kaye, whose groundbreaking 1972 compilation Nuggets was one of the first retrospectives of the music of the garage rock and psychedelic era. I recently had an in-depth chat with founding member and producer Kurt Reil about the making of DiG.

Q: What was the genesis of DiG? Given the fact that your sound is deeply entrenched in the music of the 1960s, encompassing genres such as rock, pop, psychedelia, and garage rock, the songs on the album feel like a perfect fit for the band.

A: DiG is partly a discovery or re-discovery of our roots, and partly a way to get through a very difficult time during the pandemic. The album was something we found we could do as a band, and in some cases, work long distance because of the circumstances. We were planning to start a new record of original material, and we worked on a few things, but it quickly became apparent that we were actually having more fun playing the cover tunes we were messing around with, so we just shifted gears. It was just something we just found ourselves gravitating towards at the time.

Q: One of the things I love about the album is that you didn’t just pick familiar songs to cover. The selection of tunes is wonderfully eclectic. Even though there are some well-known songs like “Journey to the Center of the Mind” from The Amboy Dukes and “Lady Friend” by The Byrds, there are a number of tunes from less familiar garage rock bands such as “Lie, Beg Borrow and Steal” by Mouse and the Traps, and “I Wonder” by The Gants. Before the advent of CDs and internet radio shows like Little Steven’s Underground Garage, the only way to hear these records was on a vinyl compilation like Lenny Kaye’s Nuggets, or to search them out in places like used record stores.

A: We went pretty deep on DiG. When we started out as a band, we were excited by the songs that we hadn’t heard or that hadn’t been played to death. They were hard to find, and when we discovered them, we were saying “Wow! I can’t believe this record.” It was very exciting. Part of the DiG concept is the musical excavation of these nuggets or buried treasures. That’s what it was like for us in our early days when we would track down these records at flea markets or garage sales. When we started out in the late 1980s, these records were just gone. They had been forgotten by the industry because they’d had their run. They were really hard to come by, and CD re-issues of this kind of music hadn’t kicked in yet. What spurred on these garage bands to make music in the first place, was dreaming about becoming stars, because of The Beatles. We started out that way, too. That was the dream that The Beatles made possible. These groups, particularly the ones featured on Nuggets, were often teenagers, and in a lot of cases, they didn’t have much money. The bands would make a record in a local studio, they’d have some success, and their songs would take off for a while. Then they went on with their lives, and that was it. Those records are like time capsules of that era.

Q: One of the other cool things about the music of that era is that the “garage rock” bands actually wrote and recorded songs that encompassed a number of genres, including rock, pop, and soul. It wasn’t just one type of music, and that’s reflected by the songs on DiG.

A: These groups were looking at the charts and listening to the radio, and there were a lot of different kinds of music being played on “pop radio” back then. The garage bands were mirroring what they heard, so if what they heard was The Rolling Stones, they did a blues kind of thing, if it was The Beatles, they went for a pop or rock sound, and sometimes their inspiration came from other things, like Motown or vocal groups. We tried to accentuate that on DiG. One example is the song “Little Black Egg” which is included on the deluxe edition. The band used to play it in our early days, during our acoustic shows at Maxwell’s in Hoboken, New Jersey. We wanted this version to have a really playful tone, so we pulled out a banjo and temple blocks to help give it that child-like vibe. One of our friends suggested Kristen should sing the lead because she has such an innocent-sounding voice. “Little Black Egg” was really fun to work on. Each song on the album has a particular significance and a story behind it.

Q: Your version of “Child of the Moon” by The Rolling Stones is one of the high points of the album for me.

A: “Child of the Moon” was another song we used to play at Maxwell’s, and at some of our other acoustic shows. We’ve never done that song electrically. One of the reasons it was included on the album was for balance. We had a bunch of full-on, full-band rock tracks, like “Lie, Beg, Borrow and Steal,” and everything was kind of heavy. So we brought in “Child of the Moon” and did a really stripped-down version. That was the same reason we covered “I Love You” by The Zombies. We’re huge Zombies fans, but we never really thought to do that song until this album came along, and we wanted something that was more acoustic in nature, where we could also focus on our three-part harmonies. That song was actually a “Nugget” since it was covered by a band called People in 1968, and in a weird coincidence, when Kristen and I were on our honeymoon years ago, the guy that owned a hotel we stayed had been the bass player for People. There were a lot of connections like that make us want to do these things, and include these songs!

Q: Speaking of Nuggets, how did you get Lenny Kaye, the curator of the Nuggets series, to do the liner notes for DiG?

A: Marty Scott [president of JEM Records] is pretty resourceful, and we had discussed using various writers, but between the two of us we realized Lenny was a good choice. We had been in each other’s orbits before, and Lenny knew who we were, and it turns out we’re all from the same area of New Jersey. He really got the whole vibe we were going for with the album.

Q: The joy inherent in the band’s performances is palpable throughout the album. To use an old-school term, the positive energy leaps off the grooves of the record. Did you feel that vibe while you were in the studio?

A: That’s really good to hear. We made a decision to have a good time and have fun with these songs. They call it “playing” music. If you have that vibe when you go into a studio, that sense of “let’s play” and you’re able to bring that kind of energy into the music, people will pick up on that. There’s a lot of markers like that set down on this record, including on “DiG Theme,” which is a playful little thing that we had a lot of fun with. It makes me smile, and I hope people will be equally enthused by it.

Q: The Grip Weeds versions of these classic songs on DiG manage to stay true to the spirit of the originals, while you also were able to put your own stamp on the material. Was that a conscious decision?

A: It’s really great to look back on all of this stuff. The Grip Weeds were definitely formed out of this kind of music, and I feel we’ve taken it to another level with our original songs. So this was a chance to re-visit the music that influenced us with a whole lot more skill, experience, and wisdom. The band could take these songs and run them through our system, our fingers, and our brains, and bring them out the other side. We could put our own imprint on them because we’ve made records and we have our own sound now. We’re coming at these songs which inspired us from a whole different angle. There’s no point in doing an exact Xerox or carbon copy of a well-known song. We had time on our hands because of the way we did this, and we could let our imaginations fly, and ask “What can we do with this song that we haven’t heard before? Where can we take this?” They only went so far with it the first time around because of financial or technical limitations. We don’t have those limitations now, so we wanted to turn these songs on, and switch them on. That’s really what DiG is.

DiG is spectacular, and it’s essential listening for fans of The Grip Weeds, and of these much-loved songs. From the band’s ethereal take on “Porpoise Song” by The Monkees to their groovy pop-rock reading of “I See The Rain” by Marmalade, on through to the hard-rocking grooves of “Louie, Go Home” by Paul Revere and the Raiders, every song on the album is worth your attention and worthy of multiple spins. DiG is now available for digital downloads and in single-disc and double-disc deluxe editions. There’s also an exclusive three-disc version, A Deeper DiG, which is only available from The Grip Weeds website.

0 comments on “The Grip Weeds “DiG” Some Cool Covers”