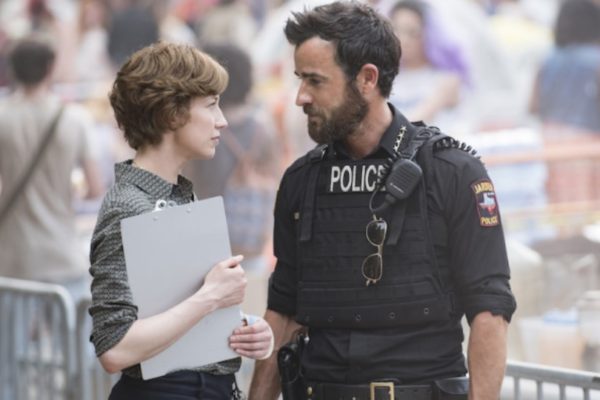 Ever feel like the world is out of control? Well, have we got a show for you. The Leftovers is a rich character-study of broken people set in a not-too-distant future where things have definitely gone from bad to worse. Based on Tom Perotta’s novel of the same name, the series concerns the “Sudden Departure” of a good part of the population, widely perceived as a “Rapture” in which the Saved have been taken by God to Heaven. How would you explain the worldwide disappearance of 140 million people — around 2% of the world’s population?  A bit of a riddle yes, but the series is the brainchild of Damon Lindelof, the creator of Lost so what do you expect? Fittingly, the HBO show returned with its third and final season on Easter.  Here’s a list of thoughts on why you should jump in and watch it all.

[amazon template=right aligned image&asin=B0195VYVOA]1. Lean into the Weirdness
The show weaves a rich tapestry of the religious, the spiritual, and the supernatural. Although sometimes hard to follow, the narrative does take you on a trippy, often mystical ride as even sedate scenes have tension bubbling beneath the surface.  And while “The Sudden Departure” may be God’s will, other theories are out there. Perhaps it’s a mass schizophrenic breakdown happening, for instance! How else to rationalize the disappearance of cheating husbands, corrupt politicians, and Bronson Pinchot? Amid the madness, people are acting out in anger, joining a cult, or simply losing their grip.  Needless to say, the end of the world is a messy affair.

2. Acknowledge that Time Is Fluid
Given that this is a Lindelof show, there are going to be time jumps and flashbacks and alternative realities. Hey, even the Ancient Egyptians knew Time was circular. Here, that roundabout back and forth is slyly executed as the writers manipulate our perceptions by redefining characters’ actions by giving us glimpses into their pasts. Some bad guys transition unexpectedly into heroes; others become victims or villains despite being good guys before. No one is necessarily as they first seem.

3. Don’t Expect Answers to Every Question
Questions are raised repeatedly about what exactly is real. It’s fascinating to see characters struggle to find the meaning in life after being left behind. To its credit, The Leftovers doesn’t dictate a single interpretation but lets you form your own opinion about what’s happening. How outlandish does it get? As Patty Levin (Ann Dowd) quips, “The solution to all your problems was a magical black man sitting out on the edge of town? That’s borderline racist.”

4. Groove to the Music
This show has some of the best music on television. Each episode features a mix of Max Richter’s haunting score as well as a strong mix of country, EDM, gospel, hip-hop, R&B and rock. Listen here to experience the The Leftovers spotify playlist.  Standouts include the use of James Blake’s “Retrograde” during a scene showing the moments just before a great standoff and Grandmaster Flash & The Furious Five’s “White Lines” which reveals a previously unknown detail about a character.

5. Rally Behind These Award-Worthy Performances
• Ann Dowd as Patty Levin: As a menacing cult member in “The Guilty Remnant” from Season 1, she was the woman in charge without saying a word. More impressive in Season 2, Episode 8 (“International Assassin”), she becomes an alternative universe Patty (a powerful US Senator) and eventually delivers a death scene, which alone should have earned her an Emmy nomination.

• Carrie Coon as Nora Durst: Coon’s Nora emerges in Season 1, Episode  6 (“Guest”) as one seriously unhinged lady who hires a prostitute-assassin as if she were calling up a babysitter. As good as that was, it didn’t prepare us for her intense toe-to-toe with Regina King’s Erika in Season 2, Episode 6 (“Lens”), one of the show’s most widely talked about scenes. (No spoilers here!)

• Regina King as Erika Murphy: The same Regina King who’s killing it on American Crime is doing just as patently brilliant work here. (Who will ever forget her full-on meltdown at a Remembrance Ceremony in “Lens”?) Better yet, King has a nearly wordless, frantic performance in the pivotal Season 2 finale (“I Live Here Now”) that packs an emotional punch.

• Justin Theroux as Kevin Garvey: If vulnerability is the key to great acting then Season 1, Episode 8 (“Cairo”) certainly showcases Theroux as an actor of note. Just watch his character unravel after realizing he’s holding Patty hostage after kidnapping her while sleepwalking. For a greater contrast to his sane, buttoned-up days as husband/father/cop, fast forward to Season 1, Episode 9 (“The Garveys at Their Best”).

• Chris Eccleston as Matt Jamison: Season 1, Episode 3 (“Two Boats and a Helicopter”) reveals Eccleston’s character grappling with his faith, impending financial ruin and the potential loss of his church.  To see his faith persist, despite more heartbreak, stream Season 2 Episode 5 (“No Room At the Inn”)  as he tries to convince the world that his “miraculously” pregnant wife woke up for just one night.