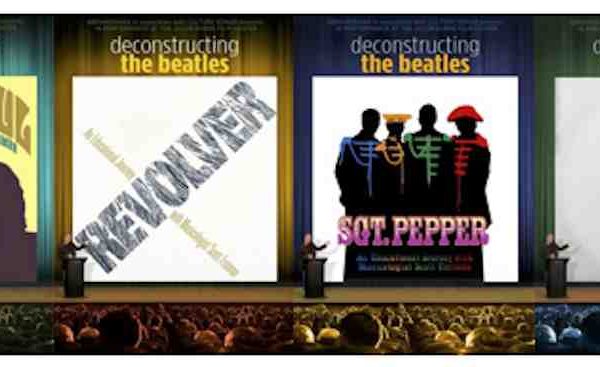 With billions of words already written about the Beatles, is there really anything new to say?  Well, yes, as it turns out. Scott Freiman — composer, tech entrepreneur and total music geek — has more-or-less stumbled onto something that people around the world totally love. He has created live, multi-media presentations — and feature films — that “deconstruct” Beatle albums, one at a time (except the quickly-recorded early ones, which he combines into a single show). He pulls each record apart, track by track, to reveal often-surprising new information about these oh-so-familiar songs. Weaving rare audio, video, anecdotes and first-person recollections – and employing some studio trickery to isolate individual tracks – Scott brings the long-ago creative process back to life. (Rubber Soul is 50 years old, for pity’s sake.)

Watching landmark records like Strawberry Fields Forever take shape, morphing from a one-track acoustic demo to a straight-ahead band performance to an adventure in studio manipulation, is to see the history of pop music encapsulated – and to appreciate anew the genius — and staying power — of this remarkable music. “I’m always amazed to see 7-year-old kids at my shows sitting next to college students and boomers,” Scott says.  “There’s no other group or artist that is as relevant across so many generations.”

The whole thing started at an informal get together for some musician friends, who insisted he keep doing it. He has lectured internationally — including at Pixar, Google and Facebook HQ’s – and taught a semester-long Beatles course at Yale. It’s grown so quickly, Scott has to do some serious juggling with his bi-coastal day job as CEO of a music biz tech startup, but he insists sleep is overrated.

The Day Job does keep Scott from touring as often as he likes, however, so you can also see him in his recently-released series of Deconstructing the Beatles films, now available on DVD and streaming. Here’s the trailer:

PS. Scott also has a gift for curating bits of entertaining Beatles geek-ery, as in this YouTube find on Ringo’s enduring wonderfulness as a drummer.